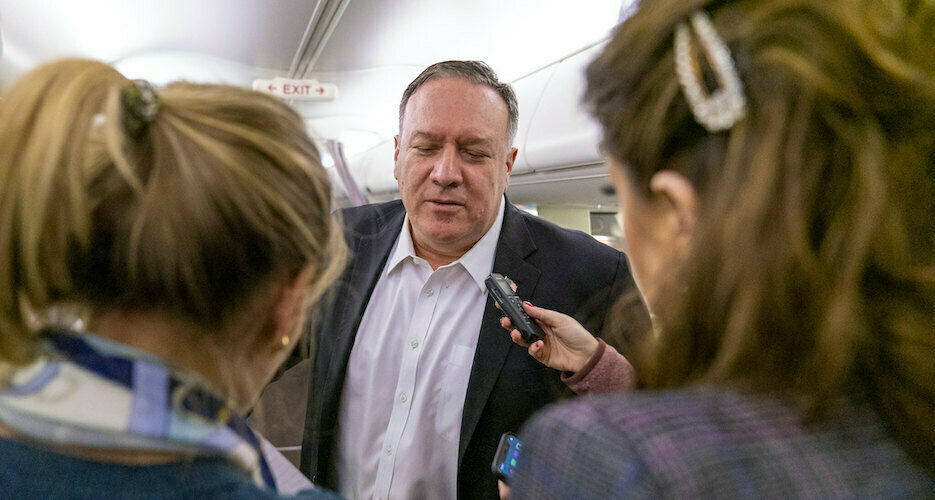 The U.S. will not lift sanctions on North Korea until the country makes substantial progress toward denuclearization, Secretary of State Mike Pompeo said Monday, but Washington nevertheless still has “hope” that the two sides can come together and strike a deal.

“This makes us misjudge who is the real chief executive in the U.S.,” an unnamed DPRK official, reportedly now leading negotiations with the Americans, was quoted as having said.

In what seemed to be a direct rebuttal to that taunt, Pompeo insistied on Monday that he and Trump are on the exact same page when it comes to Washington’s DPRK policy.

“The President’s position on North Korea and mine has been in lockstep since the very first day I became secretary of state,” the Secretary of State said.

“We have been trying very diligently from the American side” — since the first meeting between Trump and Kim, in Singapore in June 2018, Pompeo continued — “to move forward with those negotiations and hope that we will get an opportunity to do that.”

“President Trump has also been clear, until we get to that point, till we get to the point where we have made sufficient progress along the way, the sanctions — not American sanctions, but UN Security Council resolutions — will continue to be enforced and in place,” he added.

“We hope that we will get this opportunity to sit down with the North Korean leadership again and begin to chart a path forward to a brighter future for the North Korean people. It’s been President Trump’s position since we began our efforts.”

The dueling messages over the last week also come as the COVID-19 pandemic continues to infect hundreds of thousands of people, in nearly every country on the planet, including the U.S., which now has more confirmed cases than any other country.

North Korea claims to be an exception, however, and has boasted that it has no infections at all — a claim on which some experts have cast doubt.

Nonetheless, President Trump last week offered to help the North deal with the virus and asserted without elaborating that they were “going through something.”

Pompeo repeated that message on Monday.

“From early on, when it became apparent that the North Koreans were likely to have a challenge, we’ve offered assistance,” he said.

“We’ve done that through the World Food Bank. We’ve done it directly,” he added. “And we have assisted other countries and made clear that we would do all that we could to make sure that their humanitarian assistance could get into that country as well.”

Also on Monday, shortly after Pompeo’s statement, the State Department announced that it had notified the U.S. Congress of a potential new arms sale to South Korea, worth $194 million.

The equipment is meant to be used to enhance some of Seoul’s military aircraft, according to the State Department.

A U.S. government official told NK News that the timing of the announcement had nothing to do with Pyongyang’s missile tests or critical statements — or Pompeo’s response to them.

“The timing of the release, as with most all such notifications, is driven by internal coordination processes between the executive and legislative branches,” the official said.

The U.S. will not lift sanctions on North Korea until the country makes substantial progress toward denuclearization, Secretary of State Mike Pompeo said Monday, but Washington nevertheless still has "hope" that the two sides can come together and strike a deal.