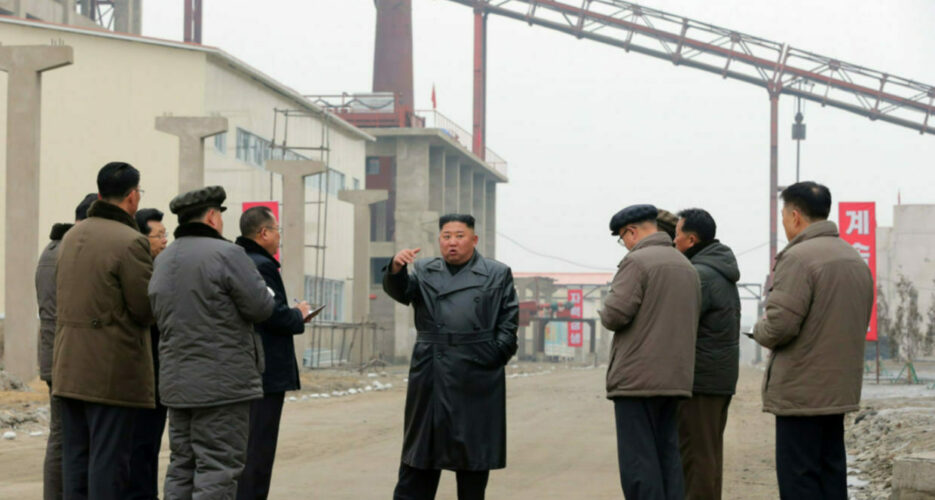 Construction on the large factory complex, located in the city of Sunchon north of Pyongyang, began in late 2016 with the flattening of the old Sunchon Nitro-Lime Fertilizer Factory, according to previous analysis of satellite imagery by NK News‘s sister site NK Pro.

It has since been touted as one of North Korea’s centrally-led “important construction projects,” often framed as being built with the intention of “increasing the [country’s] agricultural production.”

Tuesday’s report from the Korean Central News Agency (KCNA) said the new factory’s builders, scientists, technicians, and workers are in “charge of [the] agricultural front, the forefront for the defence of socialism.”

But it remains unfinished despite years of work on the project, with Kim Jong Un in his first-ever public on-site inspection of the factory this week referring to ongoing “scientific and technological problems” in its construction.

Kim did not specify a target deadline for the project’s completion, only saying “it is necessary to complete as soon as possible.”

The visit was said to be “the first leg of his field guidance in the New Year with a view to stressing once again that the construction… is one of the projects the Party is paying primary attention to among the economic tasks to be carried out in the year 2020″ — a status resulting in Kim promising it “persistent” support and funding.

Referring to 2020 as the “year of the offensive for making a breakthrough head-on” — the new primary slogan being pushed by the North Korean government since Kim’s major plenum speech presented on January 1 — Kim also during his visit slammed ongoing sanctions and “the adverse wind raised by the hostile forces.”

This has been a common refrain throughout economic site visits in recent years and even throughout 2019, with the DPRK leader again saying in the report on his visit to Sunchon that no matter if “the situation is severe and difficulties crop up in our way,” the country’s ideology of “self-reliance” can push the factory’s construction to success.

The construction of the Sunchon Phosphatic Fertilizer Factory was in this regard said to be of “important significance” to Kim, and he reportedly expressed satisfaction with the project “breaking new ground in the development of the chemical industry of the country.”

“To go ahead with such an important work as establishing a modern industry capable of mass-producing high concentration ammonium phosphate fertilizer by our own efforts, technology and manpower from A to Z is a good attempt which fully conforms with the Party’s idea and intention of launching the offensive for making a breakthrough head-on and we should continue to make excellent results by dint of such a struggle based on self-reliance,” Kim was reported to have said in the recent visit.

Indicating the type of processes the factory intends to take on, Kim was said to have encouraged the speedy “restoration of the apatite mines and [to] keep the production of high concentration ammonium phosphate fertilizer going at a high rate.”

It is unclear to which mines Kim was referring, but state media in recent years has mentioned efforts to restore an unnamed apatite mine in relation to the Sunchon project, while some named apatite mines include the Ssangryong Mine, Singye Apatite Mine, and Tongam Mine.

The Ssangryong Mine was specifically named in an early-2019 request by a DPRK government-run foreign trade website for foreign investments totaling over $13 million USD to produce apatite concentrate.

In the images released by state media on Tuesday, over two dozen new buildings at the Sunchon factory complex appear with bare concrete facades and orange roofing installed, though some of the larger structures as well as infrastructure connecting facilities appear unfinished.

After the previous factory grounds were leveled between late 2016 and mid-2017, a review of more recent satellite imagery by NK Pro found that construction did not begin to see rapid progress until April 2019.

Absent was State Affairs Commission (SAC) vice-chairman Pak Pong Ju, however, who has overseen the Sunchon fertilizer factory project for years and frequently conducted on-site inspections both before the old factory’s demolition and during the new construction process.

He may be suffering from health issues, however, having appeared wheelchair-bound in a recent group photo with Kim Jong Un at the end of last week’s Party plenum.

Pak was replaced last April as Premier of the Cabinet by Kim Jae Ryong, who did join Kim for the recent inspection published Tuesday, but had still inspected the site as recently as September.

Construction on the large factory complex, located in the city of Sunchon north of Pyongyang, began in late 2016 with the flattening of the old Sunchon Nitro-Lime Fertilizer Factory, according to previous analysis of satellite imagery by NK News's sister site NK Pro.