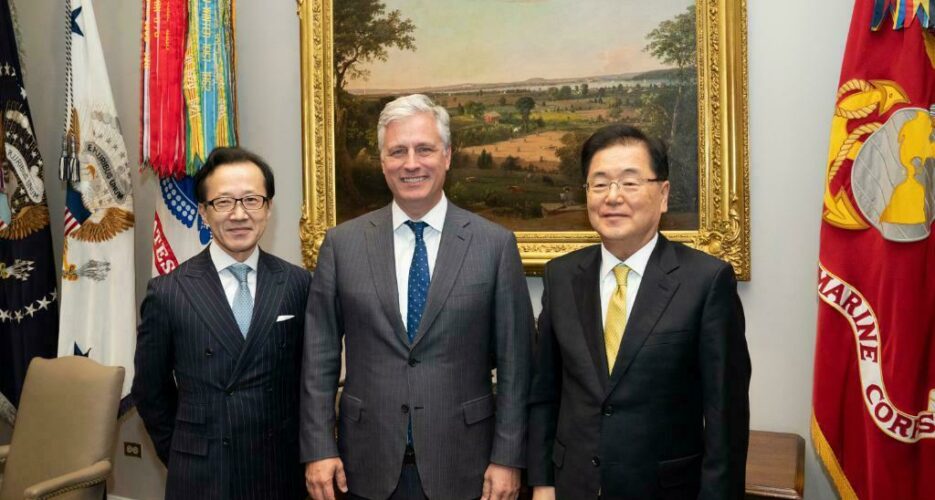 President Donald Trump met with two of South Korea and Japan’s top national security officials at the White House on Wednesday, according to a readout released late Wednesday night by the White House.

At the meeting, which the readout said lasted only “briefly,” Trump reportedly described Seoul and Tokyo as two of Washington’s “strongest allies in the Indo-Pacific region.”

“[Trump] expressed appreciation for the support and deep friendship the United States shares with both countries,” the White House readout said.

The meeting comes as North Korea has recently appeared to embrace a harder-line tone against Washington, after a months-long diplomatic stalemate — over a range of questions related to sanctions relief, the fate of the North’s nuclear weapons program, and the U.S. military presence on the Korean peninsula — remains unresolved at the beginning of the new year.

In a speech to senior party leaders at the end of December, North Korean leader Kim Jong Un admitted that sanctions were holding his country’s economy back, according to the official Korean Central News Agency (KCNA).

He said the DPRK should prepare to “tighten our belts” going forward — but he also declared that he would rather his country forge ahead under the weight of sanctions than abandon its nuclear weapons program, which triggered many of the sanctions in the first place.

According to public reports, officials from the U.S. and DPRK have not met since early October, when Trump and Kim Jong Un sent envoys to Sweden. That rare face-to-face meeting ended after 8.5 hours with no deal and newly heightened tensions instead.

Wednesday’s meeting between Trump and the two national security officials also comes just days after the U.S. President ordered an attack on a powerful Iranian military commander, Qassim Suleimani, which has caused a geopolitical earthquake in the Middle East and beyond — perhaps even as far as the Korean peninsula.

Analysts told NK News after the attack that North Korea would now be even less likely to give up its nuclear weapons — which the DPRK says are a deterrent against foreign invasion — than it was before.

And according to a news report on Wednesday in VOA, some in South Korea are calling on the government in Seoul to think twice before joining its American ally in naval patrols off of Iran’s coast, in the Strait of Hormuz.

The Trump administration has also pushed Seoul and Tokyo over the last year on the contentious issue of “burden sharing” — essentially, a question of how much each country should have to pay the U.S. for the presence of American troops.

The NSC’s tweet said that O’Brien “had great bilateral and trilateral meetings today with his Japanese and Korean counterparts.”

Biegun is also the U.S. Deputy Secretary of State.

“Deputy Secretary Biegun and Director Chung affirmed the enduring strength of the U.S.-ROK alliance and reiterated their commitment to cooperation in the Indo-Pacific,” she said.

President Donald Trump met with two of South Korea and Japan's top national security officials at the White House on Wednesday, according to a readout released late Wednesday night by the White House. At the meeting, which the readout said lasted only "briefly," Trump reportedly described Seoul and Tokyo as two of Washington's "strongest allies in the Indo-Pacific region." "[Trump] expressed