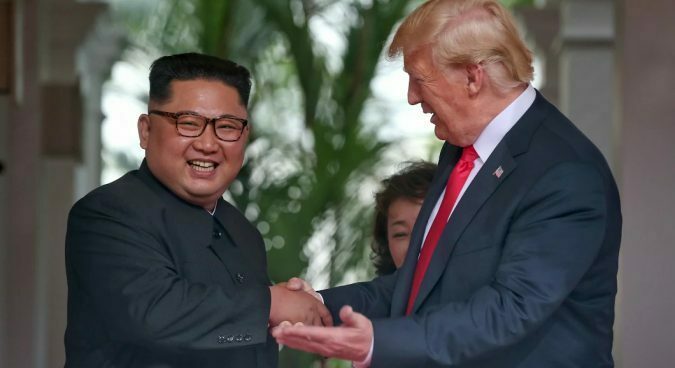 North Korean leader Kim Jong Un, has “everything” to lose if he continues to provoke the United States and “acts in a hostile way,” U.S. President Donald Trump warned in a statement on Twitter on Sunday.

Trump’s comments came just hours after DPRK state media reported that the North had conducted a “very important” test at the country’s Sohae Satellite Launching Ground — a sign that Pyongyang may be preparing for a major weapons test as the end of the year approaches.

The North Korean leadership has emphasized for months that Washington has until the end of 2019 to decide whether or not it wants to make a deal with Pyongyang.

“Kim Jong Un is too smart and has far too much to lose, everything actually, if he acts in a hostile way,” Trump said on Sunday. “He signed a strong Denuclearization Agreement with me in Singapore.”

“He does not want to void his special relationship with the President of the United States or interfere with the U.S. Presidential Election in November,” he added.

The two heads of state have appeared to enjoy an unusually close rapport since they met for the first time one and a half years ago in Singapore.

After three meetings, they sent negotiators to Sweden two months ago for a rare face-to-face negotiation between senior diplomats.

But the Stockholm meeting ended unceremoniously without a deal, and in the weeks since, the U.S.-DPRK relationship has once again reverted to insults and threats.

Even the now-infamous epithets “Rocket Man” and “dotard” — nicknames that defined the tense period when the two sides were threatening war, before Trump and Kim decided to give diplomacy a try — have reappeared in recent days, along with a newly heightened sense of suspicion and distrust.

On Saturday, the DPRK ambassador to the United Nations, Kim Song, said that denuclearization is “already gone out of the negotiation table.”

That position may be untenable to the Americans, who continue to insist that a nuclear-free North Korea is the only way forward.

“North Korea, under the leadership of Kim Jong Un, has tremendous economic potential, but it must denuclearize as promised,” Trump wrote on Sunday. “NATO, China, Russia, Japan, and the entire world is unified on this issue!”

The latest jump in tensions between Washington and Pyongyang also comes as the U.S. House of Representatives moves closer to impeaching President Trump, in part over allegations that he allegedly pushed a foreign government — Ukraine — to help him win his reelection next year.

On Saturday, after speaking on the phone with South Korean president Moon Jae-in about what the Blue House in Seoul called an increasingly “severe” situation on the peninsula, Trump told reporters that he did not think Pyongyang would seek to raise tensions before the 2020 presidential election.

“He knows I have an election coming up. I don’t think he wants to interfere with that.”

Trump’s Twitter warning to Kim Jong Un not to “interfere with the U.S. Presidential Election in November” and his comment one day earlier may be signs that the commander in chief sees the North Korea issue not just as a question of foreign policy, but domestic politics, too.

Or, perhaps, it is just a distraction that the president does not want to deal with as the House prepares to unveil its articles of impeachment against the president, less than one year before Americans go to the polls.

Within twelve minutes of Trump’s North Korea statement on Sunday morning, the U.S. president proceeded to tweet or retweet three separate times about his impeachment.

North Korean leader Kim Jong Un, has “everything” to lose if he continues to provoke the United States and “acts in a hostile way,” U.S. President Donald Trump warned in a statement on Twitter on Sunday. Trump’s comments came just hours after DPRK state media reported that the North had conducted a “very important” test at the country’s Sohae Satellite Launching Ground — a