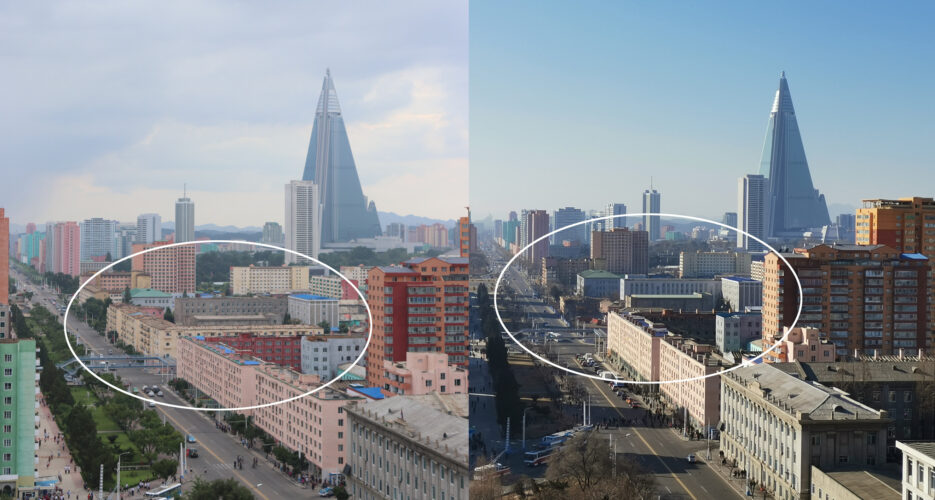 A large city block located near the Arch of Triumph in central Pyongyang is currently being demolished, satellite imagery reveals, as the North Korean capital continues to see major construction upgrades.

Situated along the main road between the Arch and the Victorious Fatherland Liberation War Museum, the block of mostly decades-old four-to-five-story apartment buildings began to be flattened in the last week of November, a review of satellite imagery provided by Planet Labs shows.

Around half of the buildings in the roughly 91,000-square-meter (almost 100,000-square-foot) block have been demolished as of January 8, including all of the apartment buildings along the two major streets bordering the block.

It is unclear how long the plan has been in the works, though it is notable the now-bulldozed apartments along the main road leading from the Arch were recently completely repainted from a deep pink to light yellow color, carried out as part of beautification efforts just weeks before the city’s September 9 celebrations.

The demolition, likely made in preparation for more modern developments in the busy central Moranbong District – possibly even a new themed “street” project – comes as Pyongyang continues to see new construction projects sprout up despite feeling the pressure from sustained international sanctions.

It is also just one of many underway now in the district surrounding the Arch of Triumph, and follows major state-led political projects completed in the area recently as well.

Some of the new construction projects are easily visible from the viewing platform atop the Arch, with the demolition of the old Pyongyang No. 1 People’s Hospital just to the northwest the most prominent example.

First flattened in early March 2018, the site has since seen little activity – though the project may be slated to pick up as scattered debris still visible in September-dated images taken from the top of the Arch by NK News appear in tourist images posted to Instagram and taken in late December to have since been cleared.

While the new project’s plans have yet to be promoted in DPRK state media, a project render visible from the site in September showed what appears to resemble a new hospital – a construction plan which previously appeared in state media as a design personally approved by Kim Jong Un in 2015.

On the same corner just next to the flattened hospital, a couple of other new tall apartment buildings have sprung up since late 2017.

One building located directly behind the Wolhyang General Store has been under active construction in the months since NK News witnessed workers on scene in September and has now reaching roughly 20 stories, while another 30+ story building further to the north now appears nearing completion.

Two twin apartment towers even further north on the road towards the Ryomyong Street entrance have also been constructed in recent years, with the latest having begun in summer 2017.

While it is evident from NK News photos of the buildings taken in September that both remained incomplete, the first, started in early 2016, appeared nonetheless to be at least partially inhabited – a trend also seen in other new apartment blocks elsewhere in Pyongyang.

The second has since been painted to match the blue theme of the first, according to a review of recent tourist images from December.

Another 20+ floor building to the southwest corner of the Arch, behind the Kaeson Cinema, was also built up mostly in the middle of 2017, but has yet to be painted or receive other finishing details since.

As for more overtly political projects, NK News obtained an image taken in early November of the demolition of the Youth Park Open-Air Theatre just south of the Arch, lying directly across from the large statues of Kim Il Sung and Kim Jong Il at Mansudae Hill.

The razing of the amphitheater, used to host political rallies such as one celebrating an ICBM test launch in 2017, began in late September 2018, according to satellite imagery.

It is still unclear, however, what will be built in its place.

This follows the recent reveal of major upgrades to a complex also lying just a stone’s throw away from the most recently-demolished block, as Kim Jong Un in October showed off the politically-symbolic Samjiyon Orchestra Theater, fitted out of the old domed Moranbong Circus.

It also comes as the nearby showcase Ryomyong Street project – officially opened in early 2017 – continues to see large-scale development of an area believed to belong to Kim Il Sung University.

Considering the opening of Ryomyong Street and the Mirae Scientists Street in recent years, it is possible that the new flattened area between the Ryugyong Hotel and the Arch of Triumph may be the beginnings of a new major themed street project in 2019.

A large city block located near the Arch of Triumph in central Pyongyang is currently being demolished, satellite imagery reveals, as the North Korean capital continues to see major construction upgrades.

Situated along the main road between the Arch and the Victorious Fatherland Liberation War Museum, the block of mostly decades-old four-to-five-story apartment buildings began to be flattened in the last week of November, a review of satellite imagery provided by Planet Labs shows. 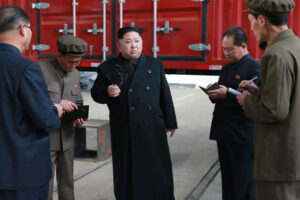 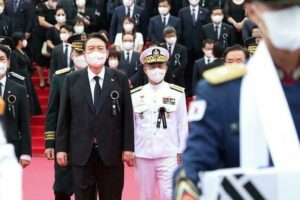 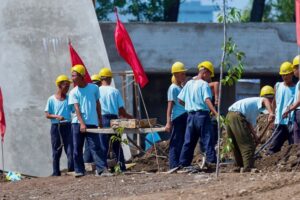