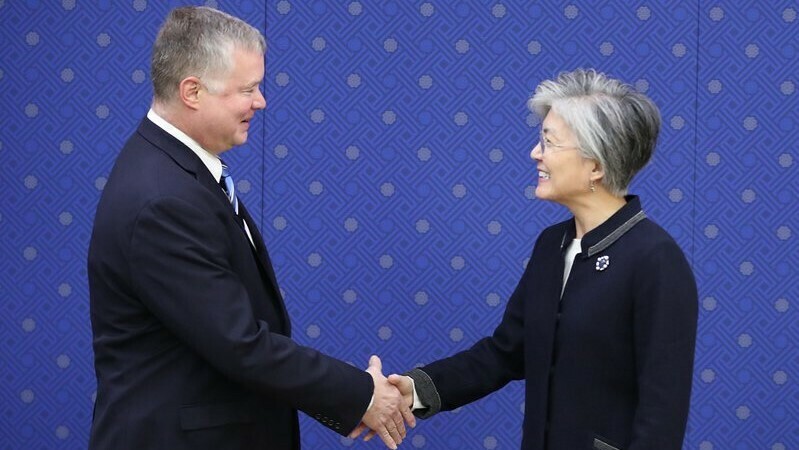 The United States and South Korea have agreed to form a “working group” to address ongoing North Korea-related issues, a U.S. State Department official said during a briefing Tuesday.

The State Department’s Special Representative for North Korea Stephen Biegun, in Seoul this week for talks with his counterparts, secured an agreement on “establishing a new working group that would further strengthen our close coordination” on a number of issues, Deputy Spokesperson Robert Palladino said Tuesday.

According to Palladino, these issues include “on our diplomacy, on our denuclearization efforts, on sanctions implementation, and inter-Korean cooperation that comply with the United Nations sanctions.”

“So this is an additional step that we’re taking that Special Representative Biegun and his team will be leading,” he added.

Regarding the working group, a spokesperson for South Korea’s Ministry of Unification (MoU) said in Seoul on Wednesday it was “part of an emphasis on U.S.-ROK relations becoming closer and closer, in the context of of hand-in-hand progress on both North-South relations and on denuclearization.”

His visit to Seoul this week comes, however, as South Korea and the U.S. appear increasingly at odds over progress on inter-Korean projects agreed to in the Pyongyang Declaration, signed last month between President Moon Jae-in and North Korean Leader Kim Jong Un.

That agreement saw the two sides agree to accelerate cooperation on joining rail and road connections as well as on joint tourist and industrial zones when the circumstances allowed it.

But when asked if the U.S. believes South Korea was in violation of sanctions against North Korea in spending USD$8.6 million on the recently-opened joint liaison office in the Kaesong Industrial Complex (KIC) and other measures, Palladino said “No.”

“What I would say is we expect all nations to take their responsibilities seriously to help end North Korea’s illegal nuclear missile program. And sanctions are what got us to where we are today, to this point, were a success,” he added.

Unification minister Cho told a hearing at the National Assembly earlier in the week that there were “differences” between the allies over plans for an on-site survey on inter-Korean road and rail cooperation.

Palladino also said Tuesday that the U.S. is “closely coordinating on an almost daily basis… at all levels of government” with South Korea and Japan on the issue of sanctions.

His comments on Washington’s commitment to maintaining sanctions pressure follow recent actions by the U.S. such as the sanctioning of a Singaporean national for money laundering and the release of evidence of sanctioned vessels engaging in illegal ship-to-ship oil transfers at sea.

Japan’s Ministry of Foreign Affairs on Monday released a statement in support of UN Security Council sanctions on the vessels, saying they and the U.S. “shared the view that the 2018 annual cap for refined petroleum products established by UNSCR has already been breached,” and calling for all UN member states to “immediately stop supplying refined petroleum products to North Korea.”

Such actions have led to frequent North Korean criticisms and another chill in U.S.-DPRK relations following what Secretary of State Mike Pompeo called a “productive” meeting with Kim Jong Un in Pyongyang earlier this month.

The two sides may, however, be preparing to hold high-level talks again soon, with Seoul’s Yonhap News Agency reporting on Wednesday, citing “multiple U.S. and South Korean diplomatic sources,” that Pompeo is set to meet a North Korean counterpart in New York around November 9.

The State Department during Tuesday’s press conference declined to confirm the reports, with Palladino saying he had “no new travel, no new meetings to announce at this time.”

The United States and South Korea have agreed to form a “working group” to address ongoing North Korea-related issues, a U.S. State Department official said during a briefing Tuesday.

The State Department’s Special Representative for North Korea Stephen Biegun, in Seoul this week for talks with his counterparts, secured an agreement on “establishing a new working group that would further strengthen our close coordination” on a number of issues, Deputy Spokesperson Robert Palladino said Tuesday.