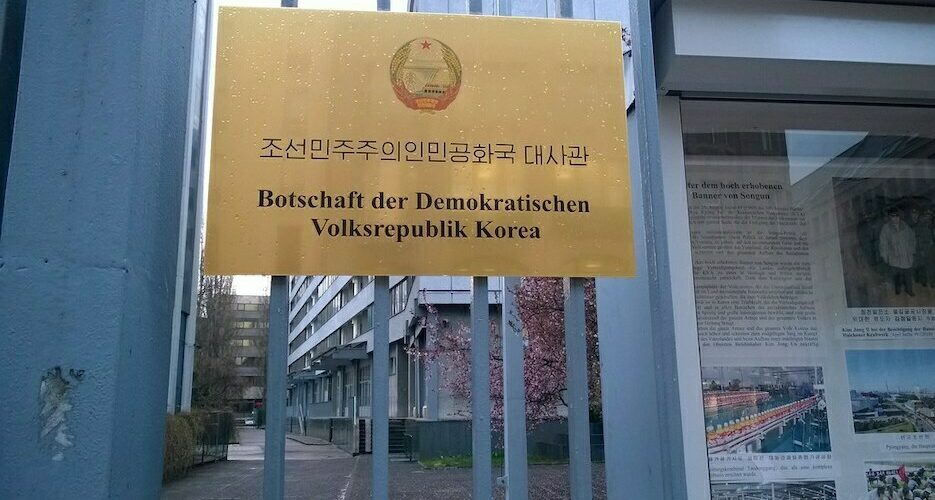 North Korea’s embassy in Germany now holds primary responsibility for the country’s relations with the European Union, NK News learned from multiple sources this week, a marked shift that could impact the DPRK’s often-fraught ties with the bloc.

Pyongyang does not have an ambassador based at EU headquarters in Brussels, and relations between the DPRK and European Union had long been managed out of the country’s embassy in London.

Diplomats in the UK were tasked with the day-to-day running of North Korea-EU diplomacy and received their accreditation from Brussels.

But Britain’s exit from the EU on 31 January has meant that that responsibility has now shifted to the DPRK embassy in Berlin, according to multiple sources, headed by ambassador Pak Nam Yong since 2017.

One source told NK News that the move came at the “last minute,” and that while the German authorities had been reluctant at first, they were left with “little choice.”

Another said the move could be a sign of North Korea’s desire to become more closely connected to the EU by running relations with the bloc from the most “powerful member state.”

“It is a clear signal that North Korea takes the EU seriously and wants to establish diplomatic relations,” Ramon Pacheco Pardo, the KF-VUB Korea Chair at the Institute for European Studies, told NK News.

“But I don’t think that the EU will shift its stance towards North Korea in the short term, unless Pyongyang signs a deal with the United States.”

News that Berlin will now serve as North Korea’s primary channel for relations with the EU also comes amid a broader reshuffle in the DPRK’s Ministry of Foreign Affairs (MFA) and among the country’s diplomatic representation in Europe.

In a series of statements on Saturday, the MFA announced that the country had recently confirmed the appointments of eight new ambassadors, with four of those postings being in Europe.

Among the diplomats receiving a new position is Choe Il, who has served as North Korean ambassador to the UK since November 2016. It’s unclear who will serve as his replacement.

Another notable appointee is Choe Kang Il, a longtime official with the North Korean foreign ministry’s North America Department, who will now serve as the DPRK’s ambassador in Austria, a critical posting which will also see him oversee the DPRK’s relations with several UN agencies.

As the Trump administration has held back on much of its public criticism of North Korea in recent months, and China and Russia have proposed lifting sanctions targeting the DPRK, European countries have in many cases shown a rare willingness to openly condemn what they say are Pyongyang’s rights abuses and geopolitical misbehavior.

EU members have criticized the DPRK’s missile launches, tried to bring attention at the UN to Pyongyang’s human rights abuses, and generally insisted that sanctions against the country must remain in place until it takes steps towards denuclearization.

Germany currently presides over the UN Security Council’s 1718 Committee, which oversees sanctions enforcement against the DPRK. The committee is set to release a report in the coming weeks outlining the North’s sanctions violations over the last year.

Berlin will also hold the EU presidency from July to December 2020.

And in January, a German court ruled that a hostel in Berlin located on the same property as the DPRK embassy had to close down because it was violating EU sanctions against North Korea.

OPPORTUNITY FOR A SHIFT IN STANCE?

According to Tereza Novotná, a Marie Sklodowska-Curie Fellow at Free University Berlin and an expert on DPRK-EU relations, the change from London to Berlin could ultimately help North Korea formalize its relationship with the European bloc.

“With Brexit, the EU is losing one channel of communication in Pyongyang so there are just six member states present,” she told NK News.

But the move, she said, “could have been a good chance to engage with North Koreans and discuss their move to Brussels versus opening an EU delegation (or a liaison office) in Pyongyang.”

All of that would still have to depend on geopolitics, however, according to the Institute for European Studies’ Ramon Pacheco Pardo.

“The policy of the EU towards North Korea is unlikely to change unless the United States and North Korea reach a deal,” he said.

“This has been the reality for the last couple of years at least,” he continued. “Having said that, eventually Germany could soften its stance towards North Korea if North Korean diplomats are proactive and skilled enough in Berlin.”

“This wouldn’t mean a significant change absent the U.S.-North Korea agreement, but perhaps a softening of Germany’s position on issues such as issuing visas for North Koreans unconnected to its nuclear program or rethinking the idea of preventing the EU-North Korea dialogue from resuming.”

North Korea's embassy in Germany now holds primary responsibility for the country's relations with the European Union, NK News learned from multiple sources this week, a marked shift that could impact the DPRK's often-fraught ties with the bloc.

Pyongyang does not have an ambassador based at EU headquarters in Brussels, and relations between the DPRK and European Union had long been managed out of the country's embassy in London.