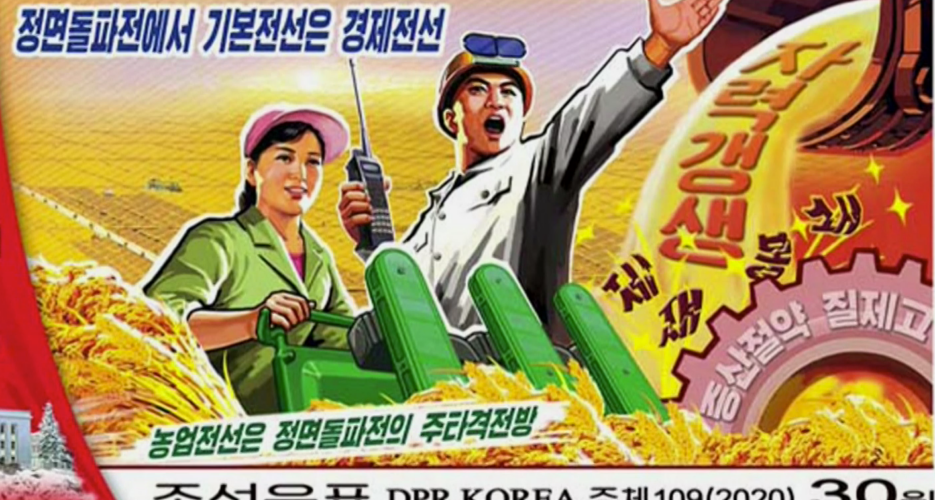 The stamps are in commemoration of the 5th Plenary Meeting of 7th Central Committee of the Workers’ Party of Korea (WPK) held from December 28-31, and each features an image of the WPK headquarters building and the WPK emblem.

They each also feature the title, “On the orientation of our immediate struggle under the present internal and external situation.”

According to a Korean Central News Agency (KCNA) report on the official release on Sunday, the stamps from the DPRK State Stamp Bureau “[reflect] the basic idea, the basic spirit, of the [plenary meeting],” and all feature text exclusively from the plenum.

The stamps are not expected to be distributed or seen to the same degree domestically as the new post-plenum propaganda posters, however, which set the tone for official ideological life in North Korea for the new year.

The first stamp features the top official slogan for the new year: “Let us break through head-on all the barriers impeding our advance!” (우리의 전진을 저애하는 모든 난관을 정면돌파전으로 뚫고나가자!).

The key shortened slogan “Head-on battle to break through” (정면돌파전), as well as the more familiar slogans “Self-reliant wealth and power, Self-reliant prosperity” (자력부강, 자력번영), are featured in large bold letters at the center, while other staple images of industry and transport appear below.

KCNA described the stamp as “reflect[ing] the idea of breaking through head-on the difficulties on the road of advance in socialist construction, not to wait for the situation to turn better, and of opening a broad avenue for achieving prosperity by dint of self-reliance” — a line directly from state media coverage of Kim’s plenum speech.

A similar line also from the speech said that “if we fail to put spurs to the struggle for bolstering our strength for self-development while waiting for the lift of sanctions, the enemies’ reactionary offensive will get fiercer and they will dare to check our advance.”

This stamp also focuses on sanctions, and includes the words “sanctions” (제재) and “blockade” (봉쇄) on the right-hand side breaking up as a result of the country’s “self-reliance” (자력갱생), represented by molten metal, and the words “[increase] production, economize, and improve the quality [of products]” (증산절약 질제고), represented by a gear.

Such symbols of U.S. and UN sanctions have been common in past propaganda posters but have not appeared in those released last month.

Kim’s plenum speech called the “offensive for making a breakthrough head-on” an effort to “foil the enemies’ sanctions and blockade by dint of self-reliance.”

It also refers to science and technology as the “inexhaustible strategic assets” (무진장한 전략자산 과학기술) of the nation and calls for health sector workers to become “the true health workers of the Workers’ Party” (로동당의 붉은 보건전사로).

On this point, Kim in the plenum speech said that “science and technology should be a beacon light that illuminates the path ahead and takes the lead in the development at present when the economic work is faced with many difficulties.”

This stamp focuses on environmental protection, and features the image of using ostensibly domestic satellites to communicate with North Korean ships and land bases as part of such policies — again, staples of DPRK propaganda historically.

The final stamp with the slogan “Let us strengthen the Party, the General Staff of the revolution, and markedly increase its leadership ability” (혁명의 참모부인 당을 강화하고 그 령도력을 비상히 높여나가자) refers to Kim Jong Un’s pleas in the plenum speech for the country’s officials and workers to take on the challenges posed by sanctions and create solutions from the bottom-up.

The passage in the speech urges the strengthening of the ruling WPK, referencing the Party’s “[decision] to wage another arduous and protracted struggle” in the face of “the hostile forces’ challenge … getting more persistent.”

The familiar slogans “Self-reliance” (자력갱생) and “Spirit of Mt. Paektu” (백두산정신) appear in flags in the background.

North Korean state media released details of five new stamps in recent days which follow leader Kim Jong Un’s new year plenum speech and the slogans and themes of recently-released propaganda posters for nationwide use, though with more explicit mention of sanctions.The stamps are in commemoration of the 5th Plenary Meeting of 7th Central Committee of the Workers' Party of Korea (WPK) held