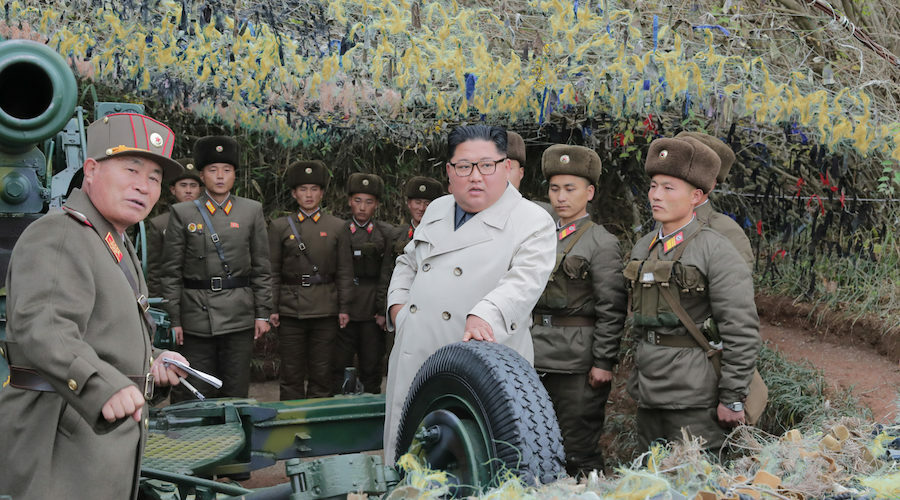 In visits covered in detail by Korean Central News Agency (KCNA) and carried on the first and second pages of ruling party daily the Rodong Sinmun, the DPRK leader was reported to have visited the Changrin Islet unit on the country’s western front and a women’s company under KPA Unit 5492 in the southwest.

Following a tour of company quarters and political education facilities at the Changrin Islet site, Kim was reported to have visited an observation post and ordered KPA chief of staff Pak Jong Chon to “increase the fighting efficiency of the defence detachment and to change its combat mission.”

He then oversaw a target practice by the coastal artillery company, KCNA reported, before stressing the need for a stepping-up of “combat preparations and increas[ing] fighting efficiency”

“We should give scientific, pragmatic, real war-like drill with higher degree of intensity to the servicepersons,” the North Korean leader was reported to have said.

These steps, he added, would ensure “their full political, ideological, physical and technological preparations so that they can carry out any operation and combat mission and notably artillery units and subunits should keep on the brisk movement for becoming crackshots.”

“[Kim] stressed the need for the units and subunits at all levels of the People’s Army to make technical arrangements and technical management in a responsible manner for full preparations for regular mobilization of the weapons and combat and technical apparatuses,” KCNA reported.

Urging the KPA to “set up a well-knit system of examining them on a regular basis and taking steps so that all the units are in full readiness for carrying out a combat mission any moment,” the North Korean leader said full preparedness represented “supreme patriotism” on the part of the army.

The weekend’s visits are Kim’s first to frontline military posts since May, when he was reported to have overseen a strike drill by KPA units on the western front.

They come just over a week after the U.S. and South Korea announced they would postpone a series of joint air combat drills in a move reportedly intended to facilitate long-stalled nuclear diplomacy between Pyongyang and Washington.

North Korea had strongly protested plans for those drills, with a top official warning that the country would “answer with shocking punishment” should the “hostile provocations” go ahead.

Pyongyang has since then carried out its own military exercises and publicized them in state media, with Kim Jong Un reported to have attended two rounds of drills by the country’s Air and Anti-Aircraft Force of the KPA.

It has also dismissed the recent suspension of the joint U.S.-ROK drills as “not helpful” towards alleviating tensions, instead repeatedly calling for an end to the U.S.’s “hostile policy” before negotiations can go ahead.

“If the United States does not take corresponding steps so that the chance of diplomacy on the Korean Peninsula disappears, I think the responsibility should lie squarely with the U.S.,” Choe said, according to Yonhap.

“We have given time and taken measures to build trust but there have been no corresponding measures in return,” she said. “The only thing we have received was a sense of betrayal.”

Kim Jong Un was also on Monday reported to have visited a women’s company under KPA Unit 5492 — located in the “remote seaside on the southwestern front” — where he attended an art performance and inspected the company’s living quarters and political education facilities.

The leader has taken a close personal interest in the company, state media said, having three years ago overseen a “month-long intensive education for the company commander” following their failure to “properly command artillery firing.”

Kim had also “organized an intensive company training later so that the company had an honor of taking the first place at the Second Master Gunners Prize Game,” KCNA reported.

In visits covered in detail by Korean Central News Agency (KCNA) and carried on the first and second pages of ruling party daily the Rodong Sinmun, the DPRK leader was reported to have visited the Changrin Islet unit on the country's western front and a women's company under KPA Unit 5492 in the southwest. 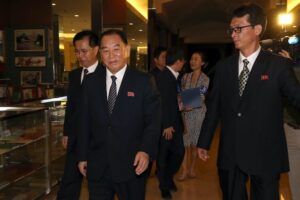