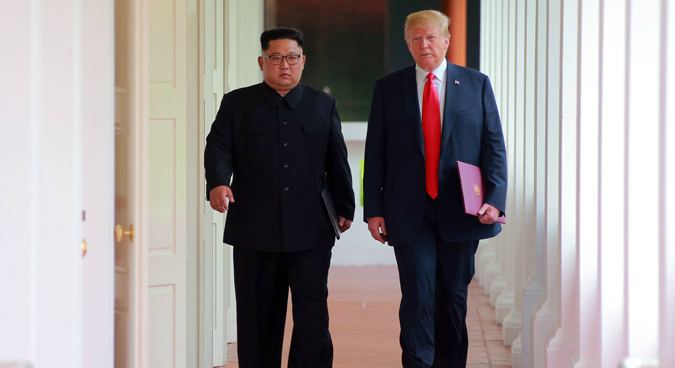 North Korea’s chief negotiator Kim Myong Gil on Monday warned that a “terrible” event may take place should the U.S. fail to offer Pyongyang a better deal, claiming that the ball is now in Washington’s court to restart dialogue.

Speaking to reporters at Beijing Capital International Airport while en route home from working-level talks with the U.S. over the weekend, Kim reiterated his disappointment with the outcome of the negotiations and said that the Americans had been under-prepared for the meetings.

“The talks were sickening,” Kim was reported to have said by South Korea’s Yonhap News Agency, saying “it depends on the U.S. side if talks will be held hereafter.”

Working-level negotiations between North Korea and the U.S. took place at the Villa Elfvik Strand conference center just north of Stockholm on Saturday.

The two sides painted a contrasting picture of their ultimate outcomes, however, with Kim in a statement on Saturday evening reporting they had broken down and blaming the U.S.’s “outdated stance and attitude” for their failure.

The U.S. State Department, in contrast, said the talks had gone well and that they had accepted a Swedish proposal to “return to Stockholm to meet again in two weeks time, in order to continue discussions on all of the topics.”

Ambassador Kim on Monday firmly rejected that proposal, however.

“The U.S has made almost no method of calculation for around 100 days since the [DPRK-U.S.] meeting in Panmunjom, do you think they can make it within two weeks?” Kim asked reporters.

“Who knows what kind of terrible event can take place if the U.S. does not prepare properly? We will wait and see,” he added. “We had great expectations… but we are disappointed.”

DPRK leader Kim Jong Un in a speech in April urged the U.S. to come up with a new “methodology” in negotiations with North Korea — a demand frequently reiterated by the country’s diplomats in the run-up to Saturday’s talks.

The U.S. in the aftermath of those negotiations insisted it had “brought creative ideas” for their North Korean counterparts to consider.

But ambassador Kim rejected that claim on Monday, saying it was “not consistent with the facts.”

“We expected a new proposal from the U.S., and we prepared a lot,” he said, saying that the U.S. had come to the talks “entirely empty-handed.”

Speaking at the impromptu press conference, Kim on Monday said it was up to the U.S. whether diplomacy between the two countries continued.

Asked what kind of the U.S. proposal the North would accept, the top DPRK diplomat would not directly comment, instead saying that Pyongyang has made clear what wants from nuclear talks.

In the wake of Saturday’s failed talks, North Korea’s Ministry of Foreign Affairs (MFA) stressed the country has no intention to hold negotiations with the U.S. unless it “takes a substantial step to make complete and irreversible withdrawal of the hostile policy toward the DPRK.”

“Dealings between the DPRK and the U.S. may immediately come to an end,” a foreign ministry spokesperson said, if the U.S. continued to adhere to the “old scenario” and failed to come up with “new calculation method.”

The North has “clearly identified the way for solving the problem,” the MFA said, adding that the U.S.’s attitude will decide the fate of the future DPRK-U.S. dialogue and that “the end of this year is its deadline.”

Biegun and Lee are expected to “discuss ways for both countries to work together for substantive progress in complete denuclearization and establishment of permanent peace on the Korean peninsula,” the MOFA said.

Lee’s trip to Washington DC will also see him meet with Director-General of the Japanese foreign ministry’s Asian and Oceanian Affairs Bureau Takizaki Shigeki. The two will then hold a trilateral meeting with Biegun.

Despite the outcomes of this weekend’s talks, South Korea’s Ministry of Unification (MOU) on Monday said the talks had meant that “both sides confirmed each other’s position more clearly.”

“There is no need to hastily fluctuate between hopes and fears after only one meeting as the two sides resumed talks to solve issues through dialogue,” MOU spokesperson Lee Sang-min told media during a regular briefing.

North Korea's chief negotiator Kim Myong Gil on Monday warned that a “terrible” event may take place should the U.S. fail to offer Pyongyang a better deal, claiming that the ball is now in Washington's court to restart dialogue.

Speaking to reporters at Beijing Capital International Airport while en route home from working-level talks with the U.S. over the weekend, Kim reiterated his disappointment with the outcome of the negotiations and said that the Americans had been under-prepared for the meetings.