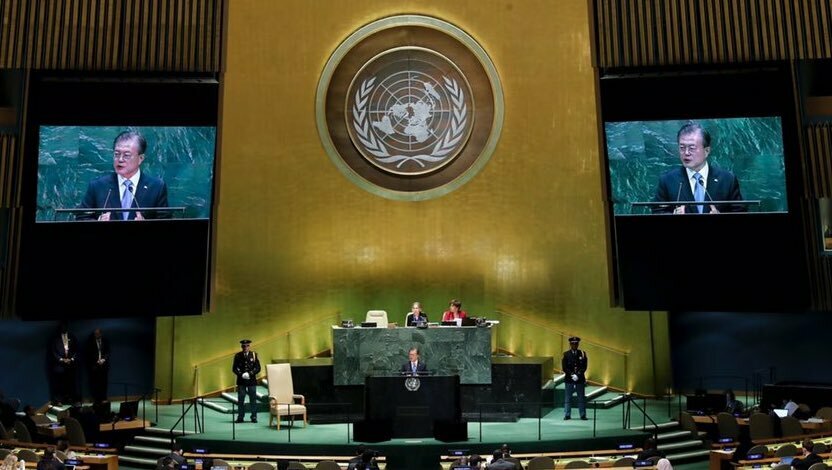 South Korean President Moon Jae-in told world leaders that South Korea will guarantee the DPRK’s security and pushed for an end to the Korean War during his speech at the UN General Assembly (UNGA) on Tuesday.

Speaking in New York at the 74th iteration of the UNGA, the South Korean president hailed progress made toward peace and outlined the three principles of his approach towards denuclearizing the DPRK.

“The tragedy of war should never be repeated on the Korean Peninsula … To this end, we must put an end to the longest-running armistice in human history and achieve a complete end to the war,” Moon told the assembled world leaders.

South Korea’s president added that when both the North and South are satisfied that their mutual security is guaranteed, it would hasten the denuclearization process, with Moon also calling on the international community “to alleviate the security concern on the Korean Peninsula.”

“The third principle is co-prosperity. Peace does not simply mean the absence of conflict. Genuine peace is all about enhancing mutual inclusiveness and interdependence while working together for co-prosperity,” Moon said.

“A peace economy in which the two Koreas take part will solidify peace on the Peninsula and at the same time contribute to economic development in East Asia and the whole world.”

The South Korean president also told the assembled world leaders that once peace is established he would push for the Demilitarized Zone (DMZ) between the two Koreas to become a UNESCO World Heritage Site and an “international peace zone.”

Moon went further than the previous South Korean administration’s plans to establish a “peace park” at the DMZ, saying he would “designate the area connecting Panmunjeom and Gaeseong in North Korea as a Peace and Cooperation District,” and calling the proposed zone “an institutional and realistic guarantee to North Korea’s security.”

“These efforts have also made it possible for President Trump to become the first sitting American president to cross the Military Demarcation Line and set foot on North Korean soil,” Moon said.

“The easing of military tensions and solid trust among the leaders of both Koreas and the United States set the stage for a momentous trilateral meeting at Panmunjeom.”

The South Korean president then once again called on the international community to relax sanctions if North Korea showed genuine steps towards denuclearisation.

“The establishment of an international peace zone will provide an institutional and realistic guarantee to North Korea’s security. At the same time, South Korea will also be able to gain permanent peace.”

Moon’s calls for ending the Korean War and loosening sanctions echoed previous comments made at last year’s UNGA, when the South Korean president said ending hostilities was an “urgent task.”

“The DMZ peace zone idea, too, is something we’ve heard before.”

The South Korean president also noted the return of remains of soldiers who killed during the Korean War, saying that “177 sets of remains have been recovered so far from Arrowhead Ridge, site of the fiercest battle of the Korean War.”

Moon said the efforts to retrieve the remains were presumed to belong to soldiers from the United States, China, France, the British Commonwealth, and three sets additional sets of remains which have been returned to South Korea.

But despite Moon’s positive tone, one expert told NK News that Moon’s objectives are often detached from the realities of dealing with Pyongyang.

“As always, his vision is laudable.  But it also bears very little relation to the current realities on the ground. You wouldn’t know from this that absolutely nothing is currently happening between the two Koreas,” Aidan Foster-Carter, a long-time contributor to NK News said.

“Vision is not enough. Panglossian optimism, that all is for the best, is not warranted right now. The risk is that this will just raise false hopes. Much as I hate to pour cold water, I think we need a dose of healthy realism at this point, not yet more pie in the sky.”

South Korean President Moon Jae-in told world leaders that South Korea will guarantee the DPRK's security and pushed for an end to the Korean War during his speech at the UN General Assembly (UNGA) on Tuesday.Speaking in New York at the 74th iteration of the UNGA, the South Korean president hailed progress made toward peace and outlined the three principles of his approach towards