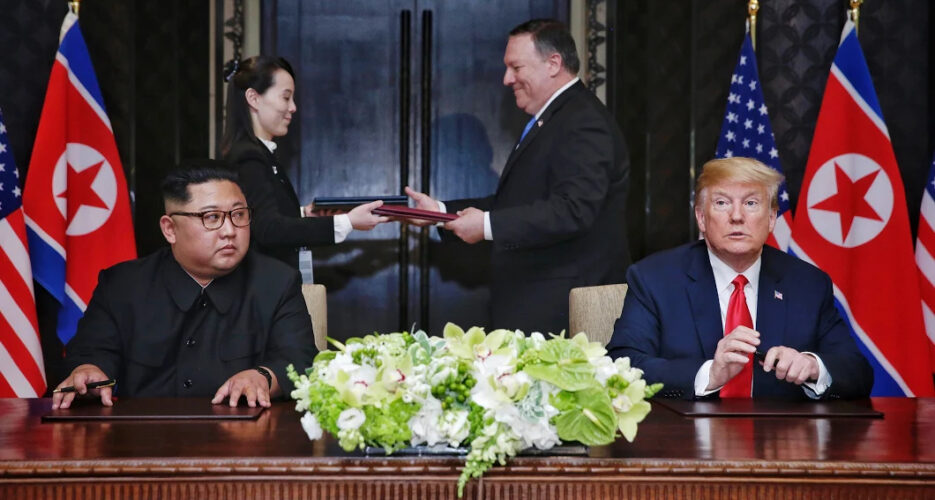 Speaking at the White House, Trump added he believed the summit in the Vietnamese capital would be “very successful” and that he hoped to “accomplish a lot” during the two-day talks.

“We’ve made a lot of progress, we’ve made a tremendous amount,” Trump told assembled reporters in Washington.

“That doesn’t mean this is going to be the last meeting because I don’t believe it will. But we have subjects to discuss that will be very fruitful.”

The U.S. President added he did not believe Pyongyang was “reluctant” to denuclearize, but that sanctions would remain in place until North Korea took meaningful actions.

“As you know I haven’t taken sanctions off, I’d love to be able to but in order to do that we have to do something that’s meaningful on the other side,” Trump said.

“But Chairman Kim and I have a very good relationship and I wouldn’t be surprised to see something work out.”

Trump’s comments echoed earlier remarks from U.S. National Security John Bolton who in January indicated sanctions could be rolled back prior to North Korea’s denuclearization.

“What we need from North Korea is a significant sign of a strategic decision to give up nuclear weapons and it is when we get that denuclearization that the President can begin to take the sanctions off,” Bolton told the Washington Times.

U.S. Secretary of State Mike Pompeo also recently indicated that sanctions could be relaxed in exchange for a “good outcome” though also added that Washington would need to “verify” North Korea’s actions.

Previously Washington seemed to be sticking to a harder line on sanctions, with Pompeo telling the UN Security Council (UNSC) in September that they must be rigorously enforced until the international community realizes North Korea’s “full, final, verified denuclearization.”

During his press conference in Washington Trump added that he had spoken to and “compared notes” with Japanese Prime Minister Shinzo Abe earlier in the day and the two were on “same page” with regards the DPRK.

“President Donald J. Trump spoke today with Prime Minister Shinzo Abe of Japan,” the White House said in a readout of the conversation.

Speaking at the White House, Trump added he believed the summit in the Vietnamese capital would be "very successful" and that he hoped to "accomplish a lot" during the two-day talks.