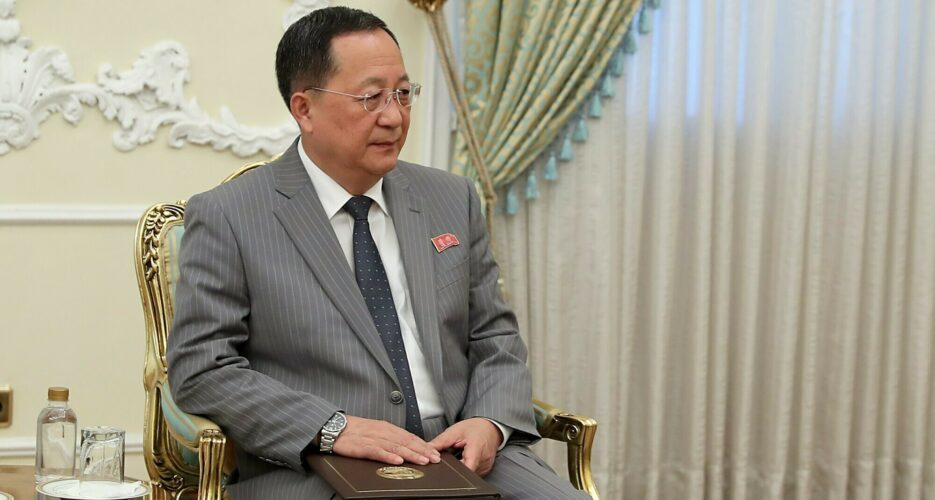 The DPRK will keep its nuclear knowledge even in the event of denuclearization, the country’s foreign minister said on Thursday, insisting that it remained a safeguard against hostility by the U.S.

In comments made as part of a three-day visit to Iran this week and carried by the Mehr News Agency, Ri Yong Ho was quoted as saying that while Pyongyang would honor its commitments made in agreements with the U.S., it would retain its nuclear knowledge as a security measure.

“Dealing with Americans is difficult, and as our main goal is total disarmament of the whole Korean Peninsula, it is necessary that the Americans also abide by their commitments but they refuse to do so,” Ri reportedly said during a meeting in Tehran with Ali Larijani, speaker of the Iranian parliament.

“Although North Korea has agreed on disarmament to deliver on its commitments in negotiations with US, we will preserve our nuclear science as we know that the Americans will not abandon their hostility toward us,” he added.

“The new policy of our country is economic development, and we need to ensure Korea’s security, so we will continue to negotiate,” he added, while also praising the longstanding ties between Pyongyang and Tehran.

Ri’s comments come amid a tense diplomatic back-and-forth between the United States and North Korea on the slow pace of ongoing negotiations on the DPRK’s nuclear program.

Hours after the foreign minister spoke in Tehran, a statement by the DPRK Ministry of Foreign Affairs insisted that Washington was failing to acknowledge the country’s “goodwill” gestures and stalling talks.

“As long as the U.S. denies even the basic decorum for its dialogue partner and clings to the outdated acting script which the previous administrations have all tried and failed, one cannot expect any progress in the implementation of the DPRK-U.S. joint statement including the denuclearization,” it read.

“Furthermore, there is no guarantee that the hard-won atmosphere of stability on the Korean Peninsula will continue,” it added.

Thursday saw a U.S. State Department spokesperson insist that dialogue between the two countries was ongoing.

“So we continue to have conversations with the government.”

But Ri’s visit to Tehran may raise eyebrows in Washington, considering North Korea and Iran’s long history of cooperation in the field of military and missile technology, among others.

The minister arrived in Tehran on Tuesday, hold talks with with counterpart Javad Zarif in a meeting in which the two were reported to have “voiced satisfaction with the level of bilateral relations and welcomed further expansion of cooperation between Tehran and Pyongyang.”

He then met with President Hassan Rouhani the following day, where he condemned a recent reimposition of sanctions against Iran by the U.S as “inappropriate and contrary to international standards.”

“The performance of the U.S. government over the years is such that today the United States is recognized as an unreliable country in the world that does not adhere to any of its obligations,” the President said, calling for the “expansion of relations and cooperation” between Tehran and Pyongyang.

Speaker Larijani on Thursday, too, warned that the North should not place too much confidence in U.S. promises.

“The Americans speak very well during negotiations and promise a bright future, but in practice, they do not meet any of their obligations,” he was quoted as having said by the country’s Press TV outlet.

Since the beginning of the year, the DPRK foreign minister has visited China, Singapore, Russia, Azerbaijan, Turkmenistan, Tajikistan, and Sweden.

The DPRK will keep its nuclear knowledge even in the event of denuclearization, the country's foreign minister said on Thursday, insisting that it remained a safeguard against hostility by the U.S. In comments made as part of a three-day visit to Iran this week and carried by the Mehr News Agency, Ri Yong Ho was quoted as saying that while Pyongyang would honor its commitments made in