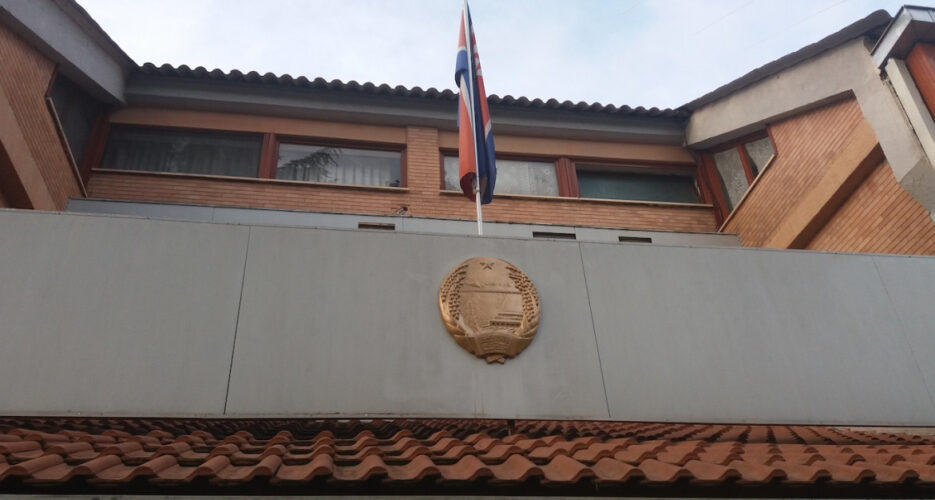 A senior North Korean diplomat in Rome has been missing since late 2018 and is believed to have defected, officials from South Korea’s National Intelligence Agency (NIS) were reported to have said on Thursday.

Senior NIS officials were quoted by South Korea’s Yonhap News Agency and other outlets as having told a lawmaker that Seoul believes Jo Song Gil, who served as chargé d’affaires for the North Korean embassy in Rome, is believed to have defected in November 2018.

South Korean intelligence officials are reportedly unaware of his current whereabouts, however.

A diplomatic source with knowledge of the case told NK News earlier in the day that Jo was due to return home to the DPRK in November, with his three-year term reportedly ended around the 20th.

Reports in South Korea’s JoongAng Ilbo on Thursday morning quoted unnamed diplomatic sources as having said just days before that date Jo had decided to stay in Italy and claim asylum with his family.

Authorities are yet to decide whether to grant his request, reports added, though are said to be “protecting him in a safe place” – reports that NK News‘s diplomatic source said should be taken with a pinch of salt.

The news is yet to be officially confirmed by the Italian government, and it remains unclear why Jo would have chosen to seek asylum with Rome and not with the South Korean government.

One expert said that if the reports are true, it’s likely Jo’s claim will be successful.

“If I were a North Korean diplomat seeking asylum, Western Europe would be the ideal place to make the claim,” Ramon Pacheco Pardo, the Korea Foundation-Vrije Universiteit Brussel Korea Chair, told NK News.

“If Jo has a good case, he will be granted asylum, be transferred to South Korea or any other country, etc. I don’t think there is any doubt about it.”

Italy’s interior ministry on Thursday declined to comment when contacted by NK News, and the country’s foreign ministry did not respond to a request for an official statement.

If confirmed, the news would represent the highest-level North Korean defection since Thae Yong-ho, then a senior DPRK diplomat at the country’s embassy in London, left his post in 2016.

The South Korean government earlier in the day said it was unable to confirm the news.

“I know nothing about the report,” spokesperson for the ROK Ministry of Foreign Affairs (MOFA) Noh Kyu-duk told a regular press briefing.

“I am not aware of issues, including the composition of the North Korean Embassy in Italy and exchanges [with our embassy in Italy].”

Jo served in an interim capacity as Pyongyang’s chief diplomat in Rome, with attempts by the DPRK to hire a full-time ambassador scuppered last year with the Italian government’s decision to stop the accreditation of Mun Jung Nam and expel him from the country.

Mun was set to replace longtime diplomat Kim Chun Guk – who was reported by South Korean press to have died of cancer – and was later reassigned to serve as DPRK ambassador to Syria.

Jo was one of four North Korean diplomats serving in the embassy in Rome, according to a November implementation report submitted to the UN by the Italian government.

The reports also come amid what appears to be an ongoing reshuffle at the DPRK foreign ministry, and the mystery disappearance from public of former Vice-Minister of Foreign Affairs Han Song Ryol.

Han’s last reported whereabouts were in February last year, when he returned home from a visit to Sweden still carrying his vice-foreign minister title.

NK News later reported that Han had been replaced in that role by veteran diplomat Choe Son Hui, as part of a string of appointments which subsequently saw Im Chon Il promoted to vice foreign minister and Choe Hui Chol reassigned to the Western European portfolio.

Two diplomatic sources told NK News late last year that they had been informed that Han had retired, with an official from South Korea’s unification ministry adding “there is nothing that we are aware about in terms of Han’s whereabouts and safety.”

However, two other informed sources said a rumor that Han had been killed in North Korea sometime in September appeared to be true.

Meanwhile, NK News learned from one of the informed sources that Ryu Kyong Jun, the DPRK’s Third Secretary to the UK embassy, had been suddenly recalled back to Pyongyang in late December, following a disagreement with the Ambassador there, Choe Il.

A senior North Korean diplomat in Rome has been missing since late 2018 and is believed to have defected, officials from South Korea's National Intelligence Agency (NIS) were reported to have said on Thursday.

Senior NIS officials were quoted by South Korea's Yonhap News Agency and other outlets as having told a lawmaker that Seoul believes Jo Song Gil, who served as chargé d'affaires for the North Korean embassy in Rome, is believed to have defected in November 2018.