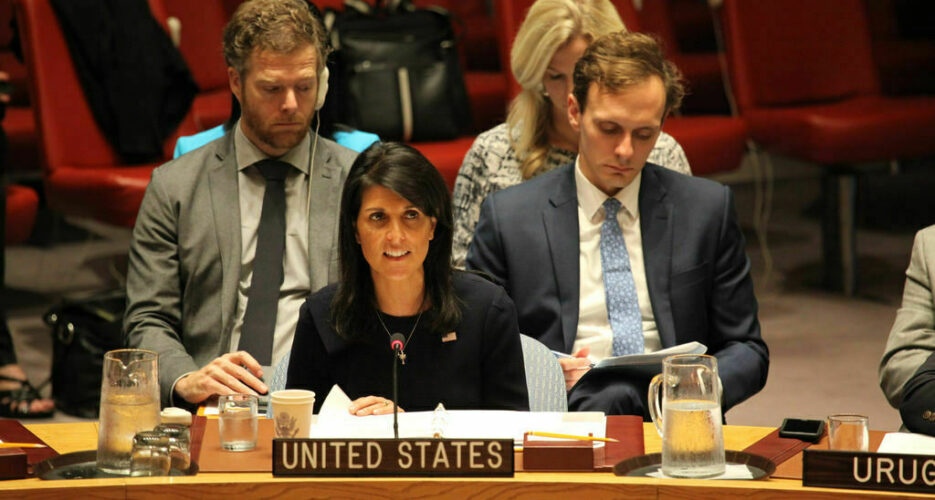 Russia pressured an independent UN panel into altering a North Korea related sanctions report as it implicated Russian actors in sanctions breaches, the U.S. Ambassador to the UN – Nikki Haley – said in a press release on Thursday.

The interim report, prepared by the Panel of Experts (PoE), was submitted to the UNSC this week after being blocked by Russia in August. Russia disagreed with “certain elements of the report”, Russia’s UN envoy Vassily Nebenzia told media on August 30.

While the report has now been submitted to the UNSC, according to the UN Mission at the UN, it is a version that has been altered under pressure from the Russian Government.

“The report submitted to the Council was not the same independent report that was submitted to the UN’s North Korea sanctions committee last month. This version of the report was amended at the request of Russia,” the press release read.

“In recent weeks, Russia pressured the Panel to alter its independent report, which included sanctions violations implicating Russian actors,” it said, while also criticizing Russia for preventing proposed designations at the UNSC.

Russia, along with China, blocked the U.S.-recommended sanctions designations in the UN against Russia-based entities and vessels.

At the time Russia’s UN mission spokesperson Fyodor Strzhizhovsky called the recommendations “unjustified” and “unilaterally applied,” TASS reported. The entities were designated by the U.S. Department of the Treasury a week earlier on August 21.

In quotes attributed directly to Haley in the press release, the Ambassador to the UN also criticized the PoE.

“Russia can’t be allowed to edit and obstruct independent UN reports on North Korea sanctions just because they don’t like what they say. Period. We’re disappointed in the Panel for caving to Russian pressure and making changes to what should be an independent report,” Haley was quoted as saying.

“This is a dangerous precedent and a stain on the important work of the Panel,” she added, while also urging the PoE to release the original report.

On Thursday, Russia confirmed it had no further objection to the report being blocked from submission to the UNSC and spoke of the amendments made.

“The situation around the report has once again demonstrated the importance of cooperation between the group of experts and the UN member states,” Strzhizhovskiy said, according to Russia media outlet Sputnik on Friday.

The panel is made up of eight experts mandated to monitor enforcement of UNSC resolutions and investigate instances of non-compliance. The PoE is mandated to submit two main reports each year, a final annual report on its investigations that is eventually published on the 1718 Committee website and a mid-term report that typically is not.

The only PoE midterm report to be published by the UN 1718 Committee was the 2017 midterm report, which followed its apparent accidental publication on a Ukrainian Government website.

Russia has also complained about leaks of information with Nebenzia previously expressing concern over “regular leaks of the Committee information to the press” and even demanding an investigation into the issue.

Russia this year stands accused of North Korea sanctions violations relating to the use of North Korean labor in its jurisdictions, revealed in reports by the Center for Advanced Studies (C4ADS) and the Wall Street Journal on August 2.

Also on Thursday, the U.S. Department of the Treasury designated one Russian and one Chinese entity it said were actually under North Korean management and control.

The two companies, Russia-based Volasys Silver Star and its China-based sister company Yanbian Silverstar Network Technology Co., Ltd, are IT companies designated for their involvement in the export of DPRK labor and for operating in the North Korean IT industry.

The Chinese based entity has direct links to North Korea’s defense and WMD industry, the Treasury said.

Russia pressured an independent UN panel into altering a North Korea related sanctions report as it implicated Russian actors in sanctions breaches, the U.S. Ambassador to the UN - Nikki Haley - said in a press release on Thursday. The interim report, prepared by the Panel of Experts (PoE), was submitted to the UNSC this week after being blocked by Russia in August. Russia disagreed with