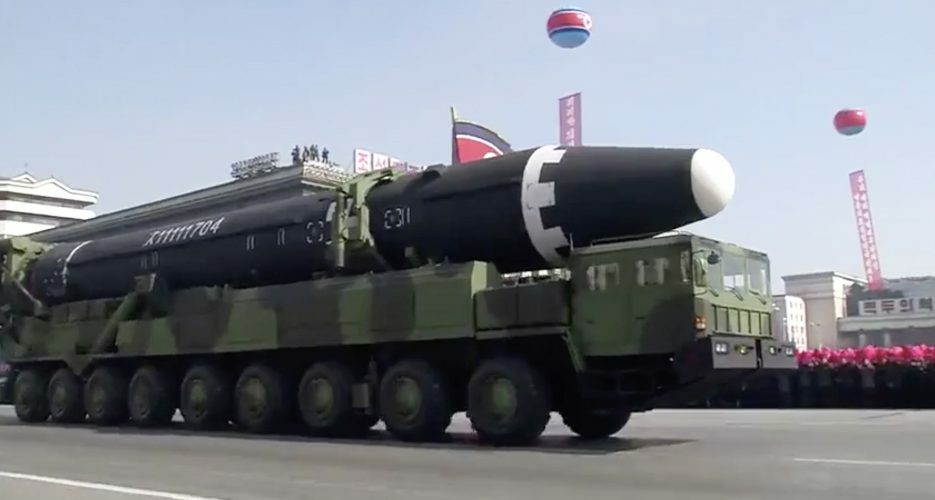 North Korea appears to be preparing for a military parade to mark the 75th anniversary of its founding party this coming October, a report submitted by South Korea’s defense ministry to lawmakers said Monday.

“The North Korean military is continuing activities that prepare for an event celebrating the 75th anniversary of the party’s foundation,” Seoul’s Ministry of National Defense (MND) stated in a report submitted to the National Assembly’s National Defense Committee on Monday.

The report added that signs of ongoing preparation for the military parade have been detected, such as the North’s recent construction work on a “warehouse for equipment in the area of Pyongyang Mirim airfield” and “renovations to Kim Il Sung Square.”

Most recently, a source told NK Pro that workers had been seen completing reinforcements to downtown Pyongyang’s Okryu Bridge –known to be used to transport heavy military equipment such as tanks and ballistic missiles from a parade training ground to Kim Il Sung square.

Kim Yo Jong — a top official and sister of the DPRK leader — previously warned that North Korea’s military will be entrusted with the “next action” meant “to cool down” citizens’ anger over anti-regime leaflets sent over the border by defector-led activist groups in South Korea.

Though Pyongyang has not tested any missiles or made any notable military provocations since then, the North Korean military issued a statement  “guaranteeing” the launch of anti-South leaflets activities by North Korean citizens in the border area.

The North Korean military is currently “focusing on activities supporting farming, while simultaneously preparing for summer training,” South Korea’s defense ministry report stated on Monday, adding that the movement of both people and vehicles have continuously been detected inside North Korea’s missile-related facilities.

The defense ministry also reported that the North Korean military is currently working on construction projects at their posts.

Some military presence was noticed at North Korean posts adjacent to the Odusan Observatory in the border city of Paju last week.

However, the “Yongbyon 5MWe nuclear reactor is continuing its status of a long-term halt in operation, and no unusual activity has been seen around Punggye-ri nuclear testing ground,” the report stated.

When asked by lawmakers if North Korea is likely to fire IBCMs to follow up on its threats of military provocations, South Korea’s Minister of National Defense, Jeong Kyeong-doo, stated that there were “no imminent signs.”

“However, we are keeping a close eye on it and are considering the possibility,” Jeong reportedly told lawmakers at the National Defense Committee session.

Jeong also reportedly added that the ROK military is trying to confirm whether North Korea is preparing to build submarines for Submarine-launched Ballistic Missiles (SLBM).

North Korea appears to be preparing for a military parade to mark the 75th anniversary of its founding party this coming October, a report submitted by South Korea's defense ministry to lawmakers said Monday.