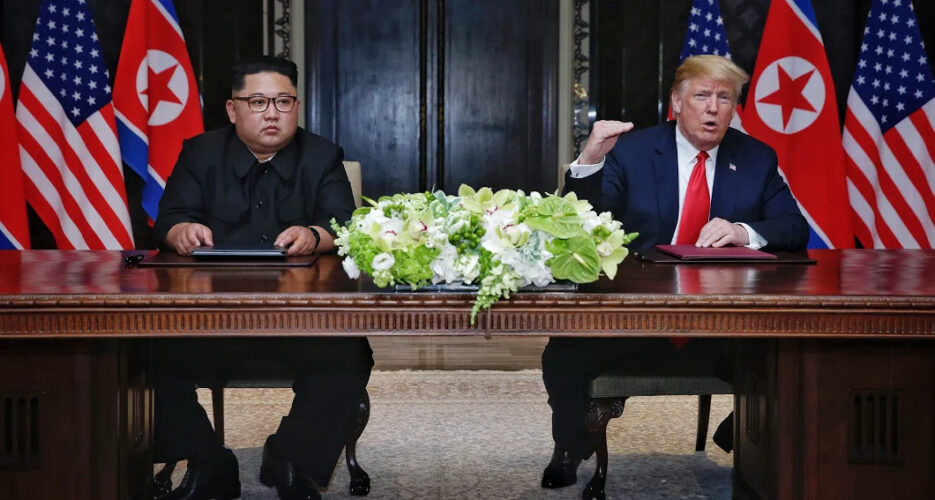 The leaders of North Korea and the U.S. on Tuesday in Singapore signed a joint declaration reaffirming Pyongyang’s commitment to the denuclearization of the Korean peninsula, and committing Washington to security guarantees in return.

“President Trump committed to provide security guarantees to the DPRK, and Chairman Kim Jong Un reaffirmed his firm and unwavering commitment to complete denuclearization of the Korean Peninsula,” it reads.

No further details are given about the exact nature of these security guarantees.

The statement also sees the two leaders “consent to establish new U.S.-DPRK relations” to “join their efforts to build a lasting and stable peace regime on the Korean Peninsula.”

The statement commits both sides to negotiations led by U.S. Secretary of State Mike Pompeo and “the relevant high-level DPRK official” at “the earliest possible date” to work on implementing the outcomes of Tuesday’s agreement.

Kim and Trump have also agreed to work together on the recovery of remains of soldiers from both sides who died in the Korean war.

“The United States and the DPRK commit to recovering POW/MIA remains including the immediate repatriation of those already identified,” it reads.

The statement follows hours of talks between Kim and Trump, which began at 0900 local time and was held at the Capella Hotel on Singapore’s Sentosa Island.

Monday saw Secretary of State Pompeo tell press that the U.S. would not accept a deal with Pyongyang that did not see the North firmly commit to dismantling its nuclear program.

But today’s statement only sees North Korea reaffirm its previous commitments to the “denuclearization of the Korean peninsula” – something DPRK leaders also agreed to in 2007 and 2010.

“We expected it would be a flop, but it’s floppier than anything we expected,” Andrei Lankov, a director at the Korea Risk Group – which owns and operates NK News – said. “The declaration is pretty much meaningless.”

“The Americans could have extracted serious concessions, but it was not done,” he continued. “The North Koreans will be emboldened and the U.S. got nothing.”

“The fact that leaders from both countries can sit together and have an equal conversation already has significant meaning,” Wang said.

“This is creating a new history, and Beijing welcomes and supports such outcome.”

South Korean President Moon Jae-in is due to deliver a speech in response to the statement later this afternoon.

The leaders of North Korea and the U.S. on Tuesday in Singapore signed a joint declaration reaffirming Pyongyang's commitment to the denuclearization of the Korean peninsula, and committing Washington to security guarantees in return. The agreement came in a broad statement signed following several hours of talks between DPRK leader Kim Jong Un and U.S. President Donald Trump. "President