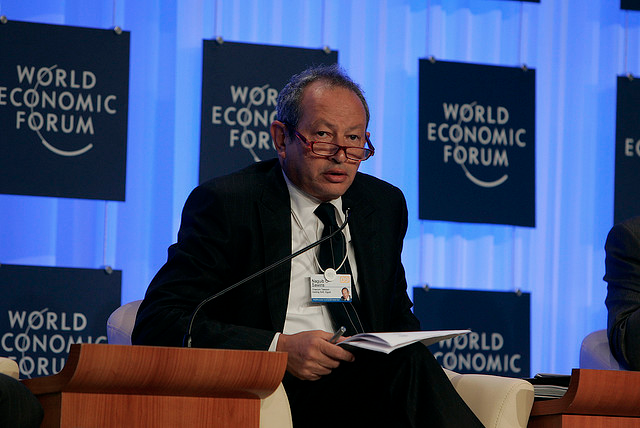 Naguib Sawiris, executive chairman of Egypt’s Orascom Telecom Media and Technology Holdings, is in Pyongyang for what appears to be at least the second time in five months, a story published by the Korea Central News Agency (KCNA) indicated on Saturday.

Sawiris, who was involved in the establishment of North Korea’s Koryolink cellphone network in 2008 and has reportedly been unable to repatriate profits since, arrived in the city on Friday and toured at least three well-known sites on Saturday, the KCNA said.

North Korean media have so far not revealed information about the purpose of his visit, which follows an unreported trip in November last year – when his private jet was tracked visiting the capital city – but is the first time since October 2014 that DPRK state media have reported officially on a visit by Sawiris.

His trip, which comes after his December 2016 announcement that he would resign as CEO of Orascom, suggests that high-level meetings with the DPRK government about the future of Koryolink, Orascom’s once majority-owned cellphone network that has reported major problems with repatriating profits, may be taking place.

“No doubt Sawiris is there on business, and that will include the fate of profits from Orascom’s JV telecoms venture, which the Egyptian company has been unable to repatriate to date,” said Christopher Green, a PhD candidate at the University of Leiden.

“I look forward to finding out whether he made any progress this time,” Green continued. “It is worth remembering that if the North Korean side is in a mood to discuss the matter seriously, it could be an indicator of political and economic conditions more generally.”

One area of potential business discussion is likely to be on a possible merger of Koryolink and Byol, a state-run network that was established after Orascom began inquiring about repatriating profits to Egypt.

“The two are understood to have agreed a basic merger — in reality a takeover of Koryolink by the government — but there is much to be done on the North Korean side to prove it’s not going to simply acquire Koryolink and then declare the rest of the deal illegal,” Martyn Williams of the North Korea Tech blog told NK Pro in November 2016.

As recently as 2015, Sawiris said he was still personally involved in negotiations to find a solution with North Korean authorities over the future of the network.

“We are still hopeful that we will be able to resolve all pending issues to continue this successful journey,” Sawiris said in a statement accompanying a November 2015 filing detailing how Orascom had struck the Koryolink investment from its balance sheet due to problems over asset control.

Last December Orascom said it would be shutting down its subsidiary bank in the DPRK, Orabank, as a result of “increasingly complex” U.S. sanctions. That closure didn’t, however, impact ongoing operations of Koryolink.

Koryolink has grown steadily in popularity since its launch in 2008 and is now reported to have over three million subscribers, just over 10% of the North Korean population.

The service offers subscribers a number of data and phone call-oriented plans, several of which were recently profiled by NK News.

Naguib Sawiris, executive chairman of Egypt's Orascom Telecom Media and Technology Holdings, is in Pyongyang for what appears to be at least the second time in five months, a story published by the Korea Central News Agency (KCNA) indicated on Saturday.Sawiris, who was involved in the establishment of North Korea's Koryolink cellphone network in 2008 and has reportedly been unable to