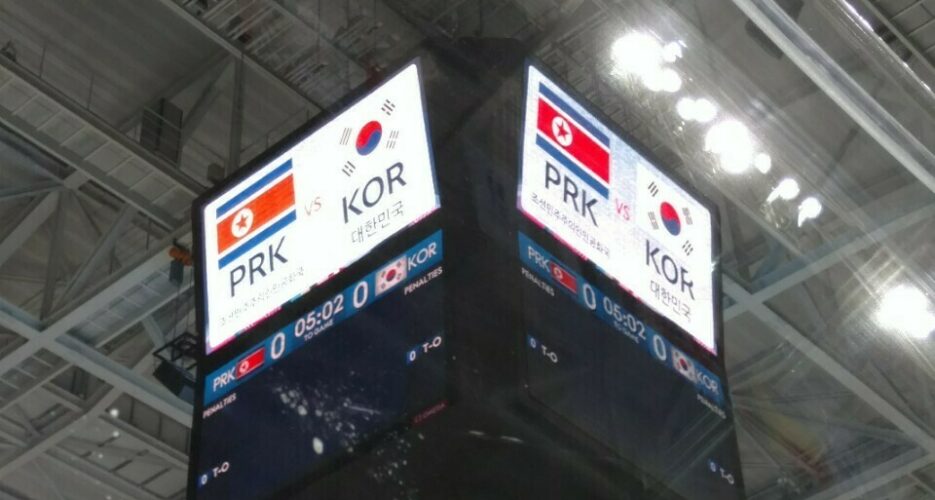 The ban, which was not communicated to the International Ice Hockey Federation (IIHF) currently overseeing the test events in Gangneung, means only South Korean spectators can bear the flag of their national team at Thursday’s inter-Korean ice hockey match in Gangneung, South Korea.

“According to the National Security Act (NSA), South Koreans as well as foreigners are not allowed to hold the North Korean flag when cheering, but North Koreans are able to do,” a spokesperson from the Pyeongchang Organizing Committee for the Olympic and Paralympic Winter Games told NK News ahead of the game on Wednesday.

As a result, an Austrian spectator who attended multiple North Korea women’s ice hockey team fixtures this week told NK News on condition of anonymity he’d been temporarily removed from the stadium by police for wearing a DPRK jersey and possessing a DPRK flag.

However, South Korean organizers didn’t get permission to ban North Korean flags from the International Olympic Committee, whose Olympic Charter states the organization is opposed to “any political or commercial abuse of sport and athletes,” confirmed Rachel Rominger on Thursday, a spokesperson at the IOC in Switzerland.

A spokesperson from the International Ice Hockey Federation (IIHF) confirmed that South Korean authorities hadn’t communicated the ban to them.

“No never has the organizer requested to ban spectators from entering with DPR Korea flags, nor would the IIHF ever agree to such a ban,” said Adam Steiss, a spokesperson for the Switzerland-based organization, told NK News on Thursday.

“The only thing we do not allow are politically-driven slogans or messages to be displayed within IIHF tournament venues,” Steiss added, but did not comment on whether the pro-unification flags that scores of supporters at this week’s events in Gangneung have been sporting would fall into this category.

But while a handful of fans supporting North Korea were temporarily ejected from stadiums this week to remove them of their flags and jerseys, South Korean fans at Thursday’s inter-Korean game could be seen throughout the stadium bearing the flag of their country.

“The North is allowed to hoist its flag and play national anthem within the stadium according to the rules and regulation of international sports event,” a spokesperson from Seoul’s Ministry of Unification said on Thursday.

“However, considering the special inter-Korean relations and public sentiment of the South accordingly, spectators are prohibited from carrying the DPRK flag into the stadium.”

A police official at Kwandong Hockey Center on Thursday told NK News the ban was due, specifically, to article seven of the National Security Act, as the flags “praise” and “incite”.

The National Security Act, which prohibits South Koreans from praising an “antigovernment organization…with the knowledge of the fact that it may endanger the existence and security of (South Korea),” now appears set to single out supporters of a single national team at an Olympic-affiliated tournament.

While North Korea has not yet qualified for next year’s Winter Olympics in Pyeongchang, if unchanged the law would prohibit even international spectators from cheering on the team.

“If someone – who is not a North Korean – cheers with the North Korean flag, we have a procedure to take it off,” the spokesperson from the Pyeongchang organizing committee clarified.

“Or just lighten up, it hardly seems in the Olympic spirit.”

Dagyum Ji contributed to this report

The ban, which was not communicated to the International Ice Hockey Federation (IIHF) currently overseeing the test events in Gangneung, means only South Korean spectators can bear the flag of their national team at Thursday's inter-Korean ice hockey match in Gangneung, South Korea.