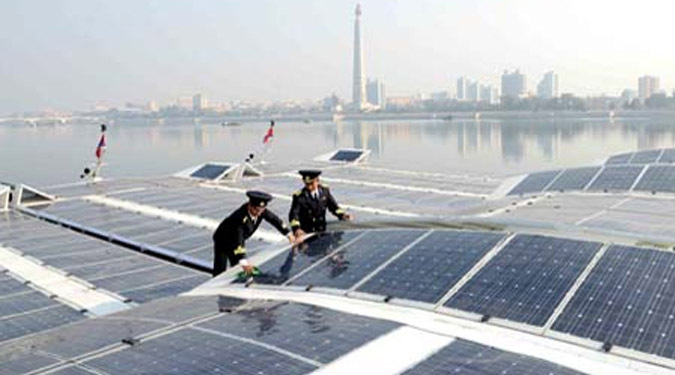 The service, which comprises three 45 tonne boats capable of carrying 50-60 passengers at a time, has reportedly, since December 2016, been “meandering through the heart of Pyongyang,” despite extremely icy conditions having frozen much of the river solid.

“They shuttle between Kim Il Sung Square and the Tower of the Juche Idea to ease traffic in the rush hours,” Uriminzokkiri said about one of their functions, adding they are also used for sightseeing tours.

But while in recent years Pyongyang has witnessed a “noticeable increase in traffic at certain times of the day,” it is not clear how much use a ferry shuttle would serve in such a downtown area, one regular visitor said.

“There are a number of bridges across the Taedong but they don’t seem to experience gridlock very much,” said Simon Cockerell, General Manager of Koryo Tours, an agency which regularly brings foreigners to tour the DPRK.

“Maybe just outside of Pyongyang this service would be useful to locals so they can avoid a long trip into the city or to Nampo in order to cross the river,” he noted, however.

Uriminzokkiri’s claims of service since December, however, is at odds with the image of the city from above. Satellite imagery captured almost daily in recent weeks by Planet Labs showed the city’s river to have been frozen over in key areas, even as recently as last Friday.

Winter satellite imagery suggests that only limited river crossings between the Kim Il Sung Square and Juche Tower would have been possible in recent weeks.

Three new solar-powered ships will complement recently built and upgraded river vessels such as the Mujigae luxury cruiser and a steamboat modeled on an East German design from the Communist era.

The three new boats were built at the Ryongnam Dockyard on North Korea’s eastern coast with “indigenous technology and efforts” and “can run for eight hours at one time” state media outlet the Korea Central News Agency said last November.

The boats were first profiled as “pleasure” boats by one of North Korea’s foreign language periodicals in October 2016.

The service, which comprises three 45 tonne boats capable of carrying 50-60 passengers at a time, has reportedly, since December 2016, been "meandering through the heart of Pyongyang," despite extremely icy conditions having frozen much of the river solid.