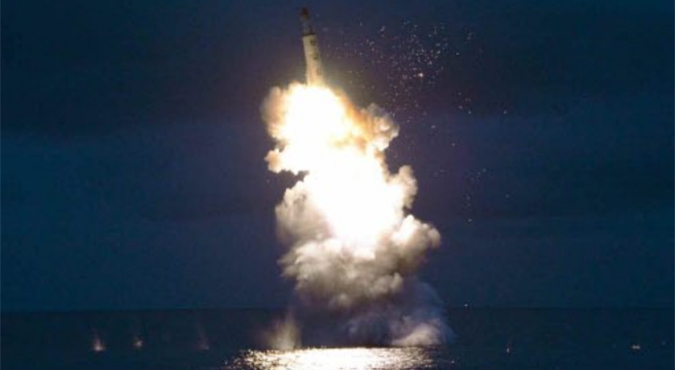 North Korea’s Wednesday morning submarine-launched ballistic missile (SLBM) test was a success, state media said on Thursday, describing it has having been carried out without “adverse impact” on neighboring countries.

The launch, which was conducted under the supervision of Kim Jong Un at around 5:30AM SKT from North Korea’s East Coast traveled some 500km South Korea’s Joint Chief of Staff (JCS) said on Wednesday.

Kim Jong Un “appreciated the test-fire as the greatest success and victory… (describing it as) a great manifestation and demonstration of the tremendous power and inexhaustible muscle of the DPRK,” the Korea Central News Agency (KCNA) said of the launch in a Thursday article.

Video of the test | Video: Uriminzokkiri

In pictures published in national daily the Rodong Sinmun, Kim Jong Un was pictured celebrating with local service personnel, having monitored the launch from a camouflaged observation station, cigarette in hand.

Third party observers largely concurred that Wednesday’s test had been a success, with analysts suggesting the high altitude trajectory had been intended to demonstrate range capabilities without overly disturbing neighboring countries.

An SLBM capability is advantageous for North Korea, giving Pyongyang a potential nuclear second-strike capability, or assured ability to respond to a nuclear attack on its mainland with a retaliatory strike from a submarine.

The KCNA said Kim praised his engineers for developing the SLBM capability in a “short span of time” and said the results of the test proved “the DPRK joined the front rank of the military powers fully equipped with nuclear attack capability.”

Washington, the report continued, would now be unable to deny that North Korea could target its nuclear capabilities towards the U.S. mainland and “operational theatre in the Pacific, ”

Despite claiming it had not disturbed neighboring countries, the SLBM launch drew fierce criticism on Wednesday from Tokyo, with the projectile reportedly breaching Japan’s air defense identification zone (ADIZ).

But unlike North Korea’s 1998 Taepodong long-range missile test, Wednesday’s launch did not, however, see the DPRK projectile pass over physical Japanese territory.

The test came just two days after South Korea and the U.S. kicked off joint Ulchi Freedom Guardian (UFG) military drills on Monday, which will last until September 2.

“However, as the country can’t afford to conduct a large-scale training they have to make use of their ‘most proud’ military asset they have,” said Yang, adding that such launches are aimed at telling the U.S.-ROK forces that the North can “strike the back of their heads.”

Tal Inbar, an Israeli missile expert, described the latest test as “a further step in the missile diplomacy of Kim Jong Un.”

Pointing out the test involved a new missile type under active development, Inbar underscored that Pyongyang was still “comfortable enough” to test it over more reliable missile types, like the Rodong or Scud.

“By choosing the SLBM option, in my view, North Korea made another step in the path to operational use of its submarine based ballistic missile force,” he said.

Land-based testing of the Pukkuksong-1 SLBM began as early as 2013, when the test stand at Sinpo was built, and the first confirmed submerged test launch was conducted in May 2015.

The Pukkuksong-1 SLBM is believed to be based on the visually-similar Soviet-designed R-27 Zyb (NATO reporting name SS-N-6) SLB.

North Korea's Wednesday morning submarine-launched ballistic missile (SLBM) test was a success, state media said on Thursday, describing it has having been carried out without "adverse impact" on neighboring countries.

The launch, which was conducted under the supervision of Kim Jong Un at around 5:30AM SKT from North Korea's East Coast traveled some 500km South Korea's Joint Chief of Staff (JCS) said on Wednesday.