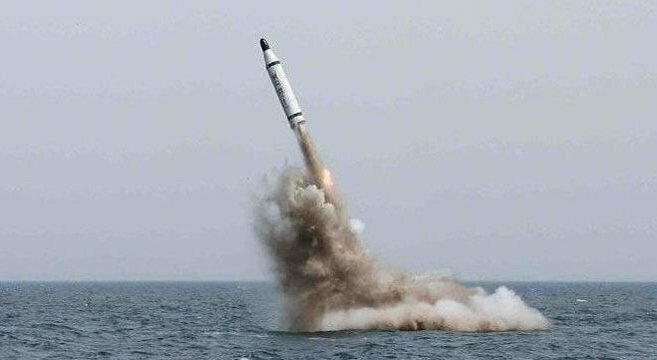 The missile, which was reported to have been launched at 18:30 S.Korean time, was “presumed” to be an SLBM, fired from near Sinpo, South Hamgyong Province, a source told the Chosun Ilbo.

The launch likely took place somewhere near the Sinpo South Shipyard, in South Hamgyong Province, a facility associated with naval research and development and home to the Maritime Research Institute of the Academy of National Defense Science. It is near the island of Mayang-do, where a larger submarine base is located.

“We are keeping an eye on North Korea’s movements, and maintaining readiness,” a JCS source told local media, adding that the projectile was recorded as flying for a “couple of minutes” into the Sea of Japan, which Koreans call the East Sea.

South Korea’s Yonhap news agency further added it may have been a “cold test,” achieving ignition after clearing the surface and flying for a short time.

Daniel Pinkston, a long-time North Korea watcher and professor at Troy University, said the latest test was evidence that developing a working SLBM capability “is an extremely important priority for the regime.”

“They are on a collision course with the rest of the world. Songun Korea is doing practically everything it can to coerce the rest of the world into accepting Songun Korea as a ‘nuclear state,'” which is a major part of the regime’s identity,” he said. Songun refers to late leader and Kim Jong Un’s father Kim Jong Il’s “military-first” policy legacy.

“The situation is getting worse. And it will get much worse before it can ever get better,” he added.

Another expert echoed Pinkston’s remarks about Pyongyang’s eagerness to develop an SLBM capability.

“I do believe that North Korea will continue efforts to miniaturize its nuclear weapons and load them on SLBMS,” said Moon Keun-sik, the director at the Korea Defense and Security Forum told NK News on Saturday.

“But SLBM launches need multiple test launches to refine, both on land and at sea, so they will continue launches until they successfully launch the SLBM loaded with a warhead,” he added.

North Korea conducted a failed SLBM lanuch in late November 2015 and another, possibly successful, launch in May of the same year.

North Korea’s possession of the ability to launch a ballistic missile from a submarine is significant, NK News intelligence director John Grisafi said after the May 2015 launch, pointing out it both extends the range of their missiles and makes it difficult to track their locations and predict launches.

The missile, which was reported to have been launched at 18:30 S.Korean time, was "presumed" to be an SLBM, fired from near Sinpo, South Hamgyong Province, a source told the Chosun Ilbo.