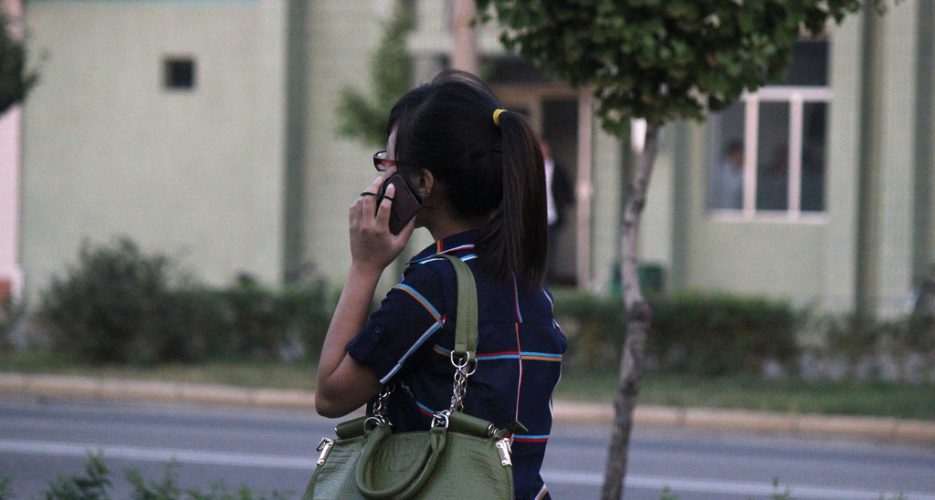 Younger North Koreans are increasingly using their cellphones to communicate with photos, video and other multimedia, the Tokyo-based Asia Press said last Friday.

Showcasing a selection of multi-media messages (MMS) sent between what is thought to be between two young North Korean girls, screenshots of one animated video message show a manga-style female character presenting the other user birthday greetings and best wishes.

“According to a Pyongyang resident who stayed in China temporarily, it is usual for youth to produce such video messages using Chinese software,” Asia Press said.

But Pyongyang discourages the distribution of foreign media and often punishes those caught with it, especially in cases involving South Korean material.

And how North Koreans are sending the multimedia messages between devices remains unclear.

While domestic data transfer, video calling and MMS support has existed in North Korea since 2011, the Washington DC based U.S. Korea Institute in a report last year said that the services were up to ten times more expensive than video calling.

One defector further told the Institute that MMS functionality only worked within the same cities or provinces, noting that long-distance data transfer was either “technically not reliable or simply not available”.

Basic subscriptions to the North Korean KoryoLink network come with 200 minutes of time, after which subscribers can “only add minutes with top-up cards purchased in foreign currency,” the report added.

And while offline transfer of photos and videos could be another option, recent changes in local legislation complicate matters.

North Korean phones come in four types: bar, folding, sliding, and touch screen. The bar type devices shown by Asia Press are thought to be the cheapest, with the U.S. Korea Institute reporting they can be bought for as little as $150 – still considerably more expensive than in neighboring China, though.

But the high prices have not slowed growth: although North Korea’s 3G phone network was founded by Egyptian firm Orascom in 2008, by 2014 it was estimated to have reached the 2.5 million subscriber mark.

“The massive arrival of cellphones provide North Koreans with many opportunities to interact
with their peers, often living far away.

“It is new, since for generations North Korean society has been compartmentalized, with people having little communications outside their work unit and neighbourhood,” he added.

The service, which is closely monitored by the state, does not allow local users to make calls to foreign networks or to use internet services.