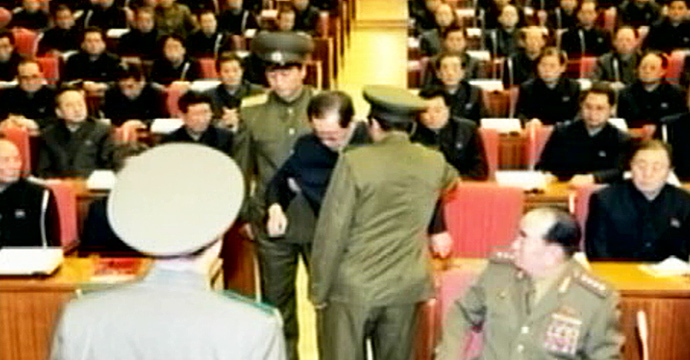 Amid rumors of his own execution, North Korean state media on Monday said that Jang Song Thaek had been “eliminated” from the party and his group “purged” – for reasons including corruption, factionalism, drug abuse, anti-state activities and womanizing.

The decision, the most public dismissal of a member of the Kim family and their associates in history, was made on Sunday at an enlarged meeting of the Political Bureau of the Central Committee of the Workers Party of Korea, state media said.

At the meeting, which was broadcast at length on Monday during a special transmission on North Korean state TV, Jang Song Thaek was shown being publicly arrested by security personnel in front of thousands of members of the Korean Worker’s Party.

But in unconfirmed reports emerging Monday, Free North Korea Radio said that Jang and his aides had actually been executed on December 5, four days before the reported special meeting of the Political Bureau.

Jang had been executed for trying to get rid of Kim Jong Un “in association with China” and now all of the organizations he had been responsible for are being monitored, an unnamed source told Free North Korea Radio .

Further executions should be expected and there was also rumor that Vice Marshal Choe Ryong Hae could be next on the purge list, being organized by Kim Jong Un and uncle Ko Soo Il, the source added.

While the ultimate fate of the “Jang group” was not made immediately clear from North Korea’s own reporting of affairs, it was clear that domestic media wanted to deal aggressively with the dismissal, dedicating maximum airtime and column length to the situation throughout domestic media.

In a lengthy bulletin published on the English language service of the Korea Central News Agency, it was explained that Jang had been “eliminated” for charges surrounding his involvement in factionalism within the party.

“Jang and his followers committed criminal acts baffling imagination and they did tremendous harm to our party and revolution.

“Jang pretended to uphold the party and leader but was engrossed in such factional acts as dreaming different dreams and involving himself in double-dealing behind the scene,” Monday’s KCNA bulletin explained.

“Affected by the capitalist way of living, Jang committed irregularities and corruption and led a dissolute and depraved life.

“By abusing his power, he was engrossed in irregularities and corruption, had improper relations with several women and was wined and dined at back parlors of deluxe restaurants,” the bulletin reads.

Jang’s sacking as vice chairman of North Korea’s National Defence Commission and as a department head of the ruling Korean Workers’ Party is a bold but potentially destabilizing move for North Korean leader Kim Jong Un.

“There are no signs of instabilty, but this would be a time of vulnerabilty. The problem is we would not know about instability until we see it, North Korea watcher Daniel Pinkston of the International Crisis Group told NK News.

“But I must say, it is almost the perfect dictatorship and Kim Jong Un seems to have that place locked down,” Pinkston added.

Leonid Petrov, a North Korea researcher at the Australia National University, said that hopes of reform under Kim Jong Un now looked unlikely given the purge.

“The dismissal of Jang Sung-taek has heralded the beginning of long-awaited political changes in the DPRK. However, instead of progressive and visionary reforms, akin to what happened in China in 1979 and in the Soviet Union in 1985, North Korea is now experiencing “Perestroika in reverse”

“After the decade of 2002 Economic Measures and the slow-motion marketisation, the young Marshal Kim Jung Un is now tightening the screws.

“Uncle Jang and his group are used as scapegoats for all policy mistakes to relegate the responsibility from the Kim’s dynasty in the same manner it was done with the “Gang of Four” in China.

The irony of that, Petrov said, was that in the North Korean case Kim Jong Un “simply leans up the space to rule the country in the same manner his father and grandfather did throughout the previous sixty years.”

Jang was said to have played a critical role in securing the transition of power from Kim Jong Il to Kim Jong Un.

Prior to his public dismissal, media in South Korea said that North Korea’s propagandists had deleted all reference to Jang Song Thaek in online media over the weekend.

“We will stay committed to promoting the traditional friendly cooperative relationship” between China and North Korea, Hong said.

Amid rumors of his own execution, North Korean state media on Monday said that Jang Song Thaek had been "eliminated" from the party and his group "purged" – for reasons including corruption, factionalism, drug abuse, anti-state activities and womanizing.

The decision, the most public dismissal of a member of the Kim family and their associates in history, was made on Sunday at an enlarged meeting of the Political Bureau of the Central Committee of the Workers Party of Korea, state media said.