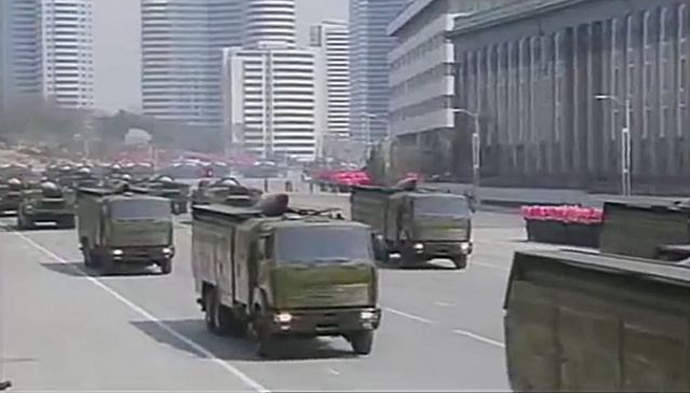 UPDATE 5/19/2013 10:46 GMT – North Korea has test fired a fourth short-range missile into the East Sea. South Korea has condemned the missile launches, with the Ministry of Unification labelling them as “provocative”.

Two missiles were launched this morning with a further launch taking place this afternoon.

“A more detailed analysis will be needed but the missiles launched may be a modified anti-ship missile or the KN-02 surface-to-surface missile derived from the Soviet era SS-21 that has a range of about 120 kilometers,” a Seoul official told Yonhap News agency.

The launches come after the U.S. supercarrier Nimitz engaged in training drills with the South Korean navy earlier this week. Pyongyang called the joint naval action “a grave military provocation to unleash a nuclear war.”

“These three missile tests can be seen as a scheduled drill in reaction to the USS Nimitz and the U.S.-ROK marine force exercise held recently,” North Korea expert Steve Chung told NK News.

“The provocative atmosphere the launches create is limited because Pyongyang only conducted a short-range (KN-02) missile test, and not as expected using the Musudan type,” Chung added.

In April North Korea moved two mid-range Musudan missiles to its East Coast amid heightened tensions with the U.S. and South Korea.

The missiles were never launched, but contradictory intelligence leaks have since suggested the DPRK may be deliberately moving the missiles along the East Coast to mislead satellite monitors.

“It’s not going to incite a substantive reaction; indeed, it won’t even be a headline on the evening news in Seoul. It can also be dismissed as a training or testing exercise, as the Ministry of National Defense has already done…I think of it as psychological “holding the line.”

The North Korean military last launched KN-02 short-range missiles in March, as tensions with the U.S. and South Korea were mounting.

KN-02 missiles are mobile missiles. Based on the Soviet-era OTR-21 Tochka, they are launched from the back of SCUD-like trucks (see above headline image) and, of all North Korean missiles, they have the shortest range.

The short-range missile is a domestic variant of the Syrian ‘Scarab A’ missile, and has a range of 120-140km. It is usually used to take out large building targets and, when miniaturized, can carry a small, tactical, nuclear load.

This is not a ‘rocket’ test or ICBM launch, and this is not the first time North Korea has tested this particular short-range missile. Pyongyang has reportedly been ‘test-launching’ the same missile from its East Sea [Sea of Japan] coast since 2004, and other launches were detected in 2005, 2006 and 2007.

Like the rest of the North Korean missile program, the KN-02 is based on old Soviet technology (in this case the reverse engineered 9K79 Tochka provided to North Korea by Syria in 1996).  However, what separates the the KN-02 from the rest of the North’s missile arsenal is that it uses solid-fuel, is more accurate than the notoriously inaccurate SCUD derivatives, and is road mobile.

The KN-02 allegedly also flies a cruise missile profile, making it difficult for PATRIOT missile batteries located in South Korea to intercept. If fired from close enough to the DMZ, it could target U.S. military installations in the ROK.