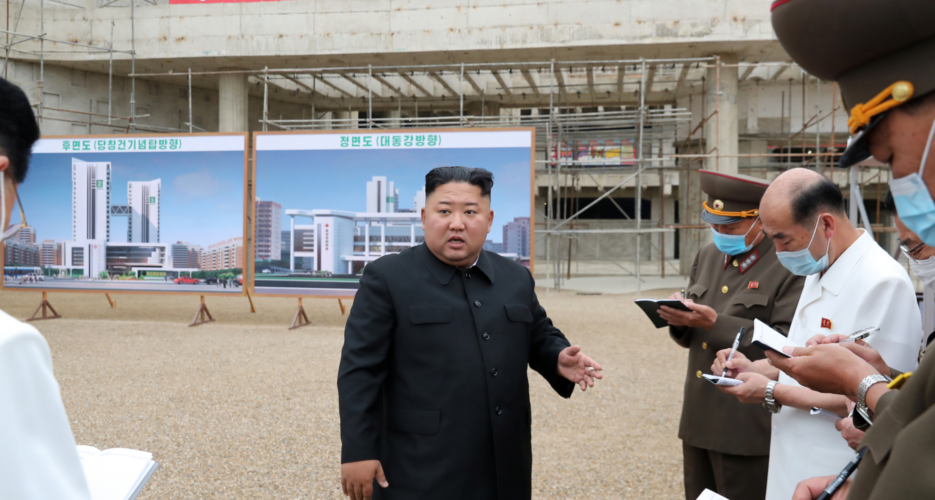 The undated visit to what is currently considered the country’s top construction project marks Kim’s first public site inspection since May 1. The Pyongyang general hospital is officially set to be complete by the ruling party’s founding anniversary on Oct. 10.

It is Kim’s second public visit to the hospital site after he opened its construction with a lengthy speech and ceremony on March 17.

In his latest visit, Kim was said to have “pointed out serious problems in [the] economic organization for the construction,” according to the English-language Korean Central News Agency (KCNA) report.

“He said that the construction coordination commission is organizing [the project’s] economy in a careless manner with no budget for the construction properly set up, yet,” the report stated.

Kim reportedly “severely rebuked” project organizers for “making a serious digression from the Party’s policy in supplying equipment and materials” and “burdening the people by encouraging all kinds of ‘assistance.’”

It is unclear what kind of “assistance” Kim has deemed inappropriate, though he is frequently reported in state media to thank companies and factories for providing materials, as well as those outside the ordinary supply chain, such as hotel and news agency workers.

North Koreans are also busy soliciting donations of advanced medical equipment from abroad, according to an NK News exclusive published in June.

Monday’s KCNA report added that these failings “go against the intention of the Party which initiated the construction for the people and mapped out its operation.”

If organizers fail to fix these problems, the “noble plan and intention of the Party … could be distorted and the image of the Party be tarnished,” Kim reportedly said in “strong terms.”

Kim ordered the Workers’ Party of Korea Central Committee (WPK CC) to “investigate” the construction coordination commission and replace those responsible for the problems.

Though the KCNA report mostly focused on Kim’s criticisms of the project’s organizers, the North Korean leader still praised the “patriotic zeal and devoted efforts of the builders and the working people in charge of equipment and materials.”

He also reportedly said “lots of things have been done so far and the construction has made exceptionally rapid progress despite [the] difficult situation.”

The Pyongyang General Hospital became North Korea’s top construction project earlier this year, when Kim said in a speech at its groundbreaking ceremony that other projects may be delayed in order to divert supplies or labor.

The sprawling Wonsan-Kalma beach resort, previously considered the country’s top priority, was subsequently delayed, though without an official announcement in state media.

And though Kim’s outlook appeared bleak, Monday’s report did not mention any change to the hospital’s Oct. 10 deadline to celebrate the WPK’s 75th anniversary.

Images of the hospital buildings — which comprise twin towers and a base building covering an area of around 60,000 square meters — suggest that basic construction of the concrete structures may be close to completion.

A KCNA report earlier this week stated that sewage and electrical work is underway, though there are still no signs of exterior finishing work.

The hospital was also a key focus of a Politburo meeting earlier this month, where Kim Jong Un reportedly expressed “satisfaction” with its progress at the time.

His visit to the site reported on Monday marks only his fourth known inspection of an ongoing project this year, with two at the Sunchon Phosphatic Fertilizer Factory and now two to the hospital.

Since opening the fertilizer factory on May 1, Kim has only appeared at a mausoleum and at a few meetings, such as those on military planning over this past weekend and the aforementioned Politburo meeting in early July, which primarily focused on the country’s COVID-19 response.

North Korea has not officially declared the Pyongyang General Hospital project to be a response to the COVID-19 novel coronavirus. State media still claims nobody in the country has been infected.

The undated visit to what is currently considered the country’s top construction project marks Kim’s first public site inspection since May 1. The Pyongyang general hospital is officially set to be complete by the ruling party’s founding anniversary on Oct. 10.