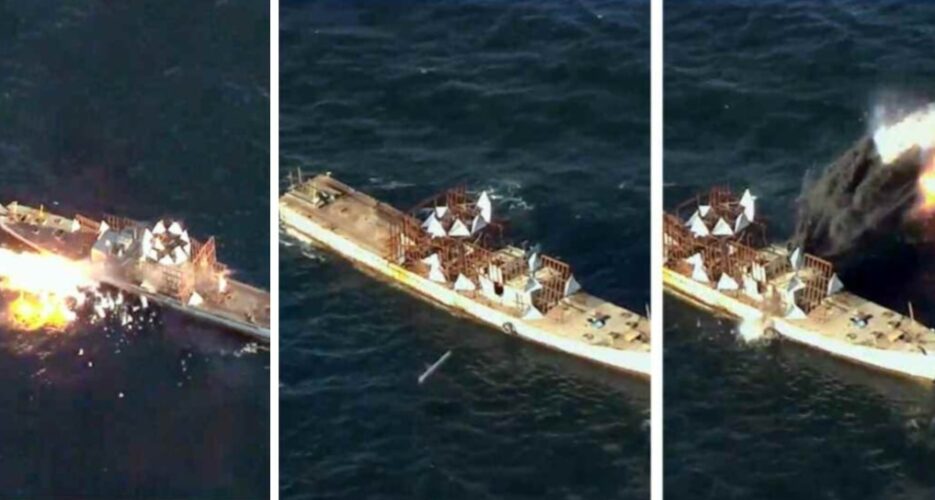 The missile test was not reported in North Korean state media earlier this month, nor by U.S. or ROK authorities at the time. Now, South Korea’s Ministry of National Defense (MND) belatedly implied on Thursday that Seoul had in fact known about the July test fire.

While not directly commenting on why the ROK authorities did not make the test fire public at the time, a Joint Chiefs of Staff (JCS) official reportedly stated that “we see this as part of the North’s regular maritime exercise.”

A South Korean newspaper called the Dong-A Ilbo revealed details of the test on Thursday morning, citing unnamed sources to report that, on July 4 in the U.S., an anti-ship cruise missile was “fired from the east coast of North Korea, flew hundreds of kilometers and fell into the East Sea.”

The report added that the missile was most likely fired from Sondok Airfield in South Hamgyong province, quoting an unnamed U.S. official who stated it appears to have been a “single missile test” for research and development purposes.

However, a South Korean military official on Thursday offered a different explanation from what the Dong-A Ilbo reported. The official told reporters that the flight range was only “around 100 kilometers,” adding that the date of test fire was July 6 on the Korean peninsula.

The official said it is “presumed to have been a ship-to-ship” cruise missile rather than a missile launched from land, adding a disclaimer that the exact type of missile has yet to be specified. South Korea’s Yonhap News Agency on Thursday also quoted a military official who stated that the test-fire was likely “from waters off the east coast” of South Hamgyong province.

While the specifications of the missile North Korea reportedly fired this month remain unclear, the known details bear similarities to the North’s reported mid-April anti-ship cruise missile test. Both tests were reported late by South Korean authorities, and ultimately not reported by North Korean state media at all.

South Korean military authorities did not reveal information on the early-morning April 14 test until the afternoon the same day, unlike other missile tests typically reported as soon as they are detected. In the case of the early-July test, they appeared to intend to keep details under wraps, only admitting information when pressed by reporters on Thursday, weeks after the event.

More details were revealed by the South Korean military on the April 14 test, with the North said to have fired short-range cruise missiles with at least similar characteristics to the North’s Kumsong-3 (KN-19) missiles, publicly tested from mobile launchers rather than ships in June 2017.

While Dong-A Ilbo reported that the test likely took place at the Sondok Airfield in South Hamgyong province and the ROK military reported the launch was likely from a ship, an NK News analysis of satellite imagery reveals only circumstantial evidence of possible military activity.

No obvious signs of drills or a missile launch were detected from the airfield or adjacent beach between July 3 and July 7 via medium-resolution Planet Labs satellite imagery, though evidence of a test from the kind of mobile launcher pictured above would be difficult to see in such imagery.

Notably, the same reporter from the Dong-A Ilbo who revealed details of the early July test at Sondok also reported in late April that, according to a U.S. military source, a mobile launcher and viewing platform meant for the DPRK leadership appeared at the airfield in preparation for a test. Such a test was not subsequently revealed to have occurred, and commercial satellite imagery also did not reveal evidence of the claims for the dates in question.

Available imagery of the waters off the coast of the Sondok location was also insufficient to determine if ships took part in the early-July test reported on Thursday.

But Planet imagery of a naval base just down the coast in Munchon — the Oct. 3 Factory under Korean People’s Army (KPA) Navy Unit 597 — showed increased activity between July 3 and July 6, which could be a sign that drills took place at that time. This base was found in previous reporting by NK Pro to have likely been involved in the April 14 test, as well.

Compared to images throughout 2020 so far, more ships appeared temporarily docked at the naval base on July 5, the purported day of the test | Images: Planet Labs

With defense minister Jeong Kyeong-doo and the head of the JCS present, the defense ministry told lawmakers that there were no notable movements in the North after it “suspended” military action against South Korea in June.

The ministry had reported to lawmakers, however, that North Korea has been conducting its usual July-August summer military training of its “specialties and tactics” at areas around its army posts. “Activities of people and vehicles in facilities related to missiles are ongoing,” the ministry added at the time.

The missile test was not reported in North Korean state media earlier this month, nor by U.S. or ROK authorities at the time. Now, South Korea's Ministry of National Defense (MND) belatedly implied on Thursday that Seoul had in fact known about the July test fire.