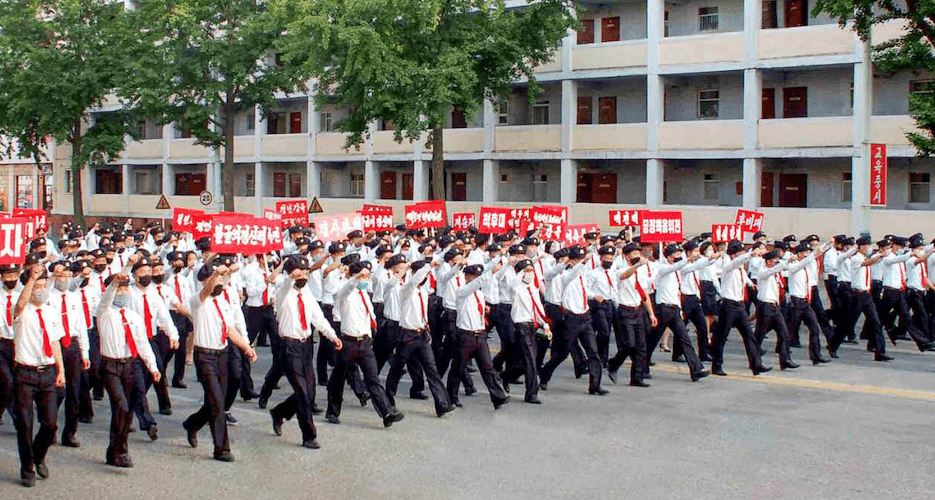 It is now too late for South Korea to resolve a mounting crisis on the peninsula, a high-level editorial in North Korea’s ruling party daily said Tuesday, warning that North Koreans stand ready to “exterminate” defectors and retaliate against Seoul.

The ronsol (special article) was carried on the second page of Tuesday’s the Rodong Sinmun, alongside a statement by the General Staff of the Korean People’s Army (KPA) promising to defy a 2018 inter-Korean military accord and advance into previously-demilitarized areas — as well as start a retaliatory anti-South leafleting campaign.

“Now our thorough battle of retaliation has moved on to the working stage,” the ronsol, under the byline Yun Chol Hui, said. “South Korean authorities are belatedly making a fuss and talking nonsense, but it’s too late.”

The special article described South Korea’s recent efforts to ban NGOs from sending anti-Pyongyang leaflets across the border as a “deception” aimed at temporarily calming North Koreans down.

“The world will clearly see how our people, who unconditionally trust and follow their leader… exterminate the human scum from this planet” and punish the South Korean authorities, the article continued, describing some workers as wanting to cover their enemies with “boiling molten metal.”

“Human scum” is a common epithet directed at high-profile defectors by North Korean media, particularly those involved in activism.

North Koreans are furious, the article continued, because the anti-regime leaflets from the South insulted leader Kim Jong Un, described as the “Supreme dignity that our people consider more precious our own lives.”

The special article on Tuesday also insisted that the South Korean government had on multiple occasions breached both the Panmunjom declaration and the inter-Korean military agreement, signed in April and September 2018.

A statement by the KPA General Staff, carried on the same page of the Rodong on Tuesday, announced Pyongyang’s decision to effectively disregard that inter-Korean military accord and “make the army advance again into the zones that had been demilitarized under the north-south agreement.”

Notably, in an apparent response to top official Kim Yo Jong’s Saturday order for the North Korean army to take steps to “cool down our people’s resentment,” the KPA also said that it would cooperate with citizens on a “large-scale leaflet scattering” campaign aimed against the South.

Such activity, an official from South Korea’s Ministry of Unification (MOU) said in a background briefing on Tuesday, would violate the 2018 Panmunjom Declaration.

“The South and the North needs to make effort complying with terms of agreements,” they insisted.

And while the North on Tuesday morning announced plans for a leafleting campaign of its own, South Korea has continued efforts to crack down on activists sending the material to the North.

Vice unification minister Suh Ho visited the border area of Ganghwa just hours after the KPA issued its statement, in a visit aimed to assess the preparedness of local law enforcement to block activist groups — some led by defectors — from scattering leaflets and plastic bottles.

South Korea has in recent days pushed ahead with a number of new rules aimed at regulating the leafleting activities — even moving to revoke the corporate permits of two NGOs involved in the launches.

But despite growing inter-Korean tensions, the Rodong Sinmun chose to top its front page on Tuesday with an editorial (sasol) emphasizing the importance of the economy.

“Only a few months are left” until the 75th founding anniversary of the Workers’ Party of Korea (WPK), that article underlined, exhorting North Koreans to work harder to be ready to celebrate October’s “grand political festival.”

“There are challenges and hurdles lying in front of us that we cannot ignore,” the editorial said, stressing that the party’s goals were “massive” in scale.

The North must use the “hostile forces’ death-blows as an opportunity” to boost the economy, it argued, touting the May opening of the Sunchon Fertilizer Factory as one such victory.

The chemical industry must make progress, it said, to “drive and guarantee the country’s economic development.”

The metal, coal, electricity industries must focus more on mobilizing potential for increased production, the article went on, and light industry must place a greater emphasis on producing more high-quality consumer goods.

The Wonsan-Kalma tourist zone — previously one of the DPRK’s top-priority projects — was not mentioned, however, likely due to it having failed to meet an April 15 completion deadline.

It is now too late for South Korea to resolve a mounting crisis on the peninsula, a high-level editorial in North Korea's ruling party daily said Tuesday, warning that North Koreans stand ready to "exterminate" defectors and retaliate against Seoul.

The ronsol (special article) was carried on the second page of Tuesday's the Rodong Sinmun, alongside a statement by the General Staff of the Korean People's Army (KPA) promising to defy a 2018 inter-Korean military accord and advance into previously-demilitarized areas -- as well as start a retaliatory anti-South leafleting campaign.