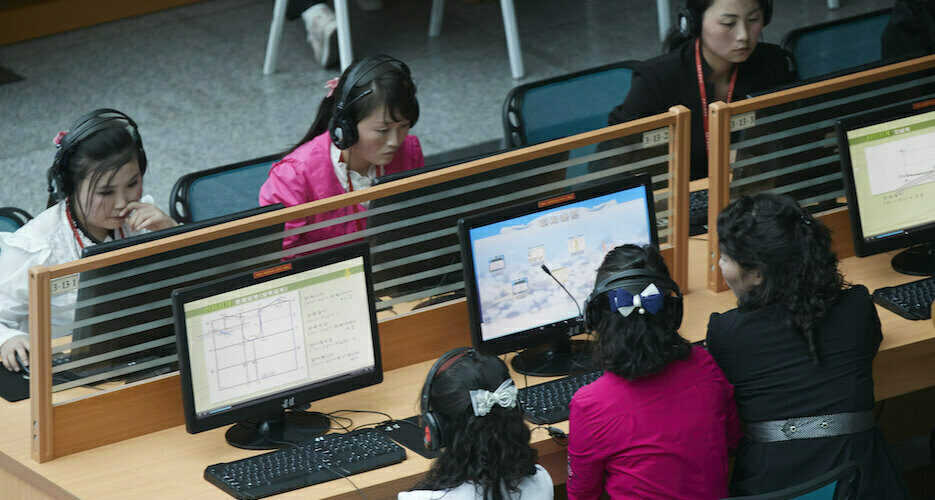 Update at 17:30: this article has been updated to include South Korean government confirmation that propaganda loudspeakers have been removed from the inter-Korean border.

North Korea on Wednesday appeared to have removed a number of anti-South Korea propaganda articles from several official websites, Seoul said, amid signs of a broader de-escalation of mounting tensions between the two Koreas.

In a move that coincided with news earlier in the day that leader Kim Jong Un had ordered the North Korean military to hold off on “military action plans” against the South, Seoul’s unification ministry confirmed that the articles — features on a number of outer-track DPRK-run websites — have been removed.

“We have confirmed the fact that they were uploaded and then deleted,” said unification ministry spokesperson Yoh Sang-key in a regular briefing on Wednesday.

Many of these articles condemned the South Korean “enemies” as well as denouncing “human trash” — a common North Korean epithet directed at politically-active defectors.

But South Korea’s Yonhap News Agency on Wednesday reported that Pyongyang had removed a total of 13 articles from the DPRK Today, Arirang Meari, and Tongil Voice websites.

Subsequent analysis by NK News confirmed that six articles from the Arirang Meari, two from Tongil Voice, and six from DPRK Today had been removed.

Seoul’s Ministry of Unification (MOU) told NK News that the articles were deleted around 07:50 on Wednesday.

Some anti-South articles carried on the Uriminzokkiri and DPRK Today websites, however, remain online.

One article, for example, titled “We are Waiting for the Time for Retaliatory Action” appears to still be live as of Wednesday early afternoon.

But while the ministry could not confirm the full list and number of articles deleted, the news would not be the first time that North Korea has removed politically-sensitive material from its official websites.

In the wake of the high-profile purge of Jang Song Thaek in 2013, for example, hundreds of articles about the executed official were deleted.

The news also comes amid broader signs of a de-escalation of tensions between the two Koreas, with a South Korean official reporting Wednesday that a number of propaganda loudspeakers — reinstalled along the inter-Korean border by the DPRK army in recent days — had been removed.

Reports earlier in the week, which Seoul’s Ministry of National Defense (MND) declined to confirm, said that broadcasting facilities in “at least 30 places” had been installed — claims that, if confirmed, would have represented a violation of a 2018 inter-Korean agreement.

But speaking at a closed-door seminar of the Foreign Affairs and Unification Committee of the National Assembly, vice unification minister Suh Ho reportedly told lawmakers on Wednesday that the North had taken down all loudspeaker facilities recently reinstalled along the border.

Ministry of Unification (MOU) spokesperson Yoh earlier in the day said that he had seen reports detailing the deleted anti-Seoul articles and the loudspeakers, reiterating “the Government’s position that agreements between the South and the North should be complied with.”

North Korean media reported on Wednesday that a preliminary meeting of the 7th Workers’ Party of Korea (WPK) Central Military Commission (CMC) had been held on Tuesday, and that Kim Jong Un had decided to “suspend” anti-South military action plans.

The move marked a significant volte-face for Pyongyang, which had earlier in the month warned of looming military action and promised to send millions of anti-Seoul leaflets into the South.

Following days of coverage in state media threatening revenge against the country’s enemies in the South, Wednesday’s edition of ruling party daily the Rodong Sinmun was devoid of any anti-South invective.

And while Wednesday’s state media reporting did not detail what kind of military action had been in the works, Seoul’s Ministry of National Defense (MND) in response said it welcomed the move.

The ministry is closely watching North’s military movements and is sustaining a “firm military readiness condition,” they continued, as well as taking measures to prevent a further escalation of tensions.

Update at 17:30: this article has been updated to include South Korean government confirmation that propaganda loudspeakers have been removed from the inter-Korean border.

North Korea on Wednesday appeared to have removed a number of anti-South Korea propaganda articles from several official websites, Seoul said, amid signs of a broader de-escalation of mounting tensions between the two Koreas.