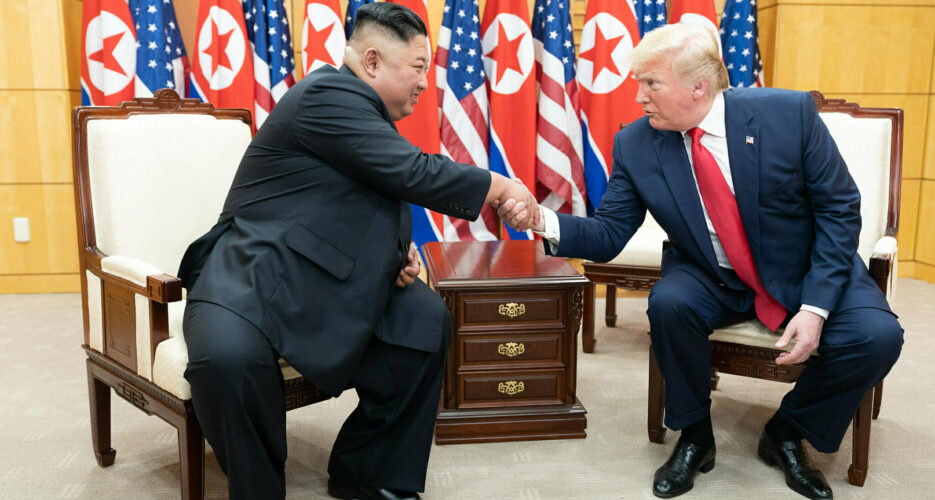 Correction at 1845 EST: This article has been updated to reflect that four of the words in President Trump’s comment were “no.”

U.S. President Donald Trump told reporters on Tuesday that he had “no reaction” to North Korea’s latest missile launches, conducted on Monday according to the official Korea Central News Agency (KCNA).

The unusually terse comments from the president on a major national security issue — just 11 words, four of which were “no” — come after North Korea conducted its first military drills and missile tests of the year and then boasted about them in the country’s propaganda.

Asked about the military events, President Trump was uncharacteristically mum.

“Did you have a reaction to the launch of those North Korean missiles yesterday?” a reporter asked the president on Tuesday at the National Institutes of Health (NIH), at an event about the coronavirus outbreak.

“No, I have no reaction,” Trump said.

“Short-term missiles — no. No. None,” he said, likely referring to the type of missiles the DPRK tested on Monday, which can only fly a short range.

By contrast, the next two questions — both about the Taliban, another one of the White House’s main foreign policy challenges — led to President Trump speaking freely for more than 100 seconds.

The president’s North Korea comments on Tuesday highlighted what appears to be a new strategy for the Trump administration in dealing with the ordinarily provocative issue: stay quiet.

Amid a months-long diplomatic standoff between Washington and Pyongyang over nuclear weapons and sanctions, President Trump — who once said the North would be met with “fire and fury like the world has never seen” if it threatened the U.S. — had not publicly commented on the country in weeks.

Last week, one of the administration’s top North Korea negotiators, Alex Wong, backed out of testifying at a Senate hearing on North Korea policy and opted instead to speak at a friendly think tank, where he wouldn’t have to face difficult questions about Washington’s long-stalled diplomatic outreach to Pyongyang.

In Trump’s State of the Union address in early February, the president broke his own precedent and avoided mentioning the DPRK at all in the speech.

Trump’s remarks on Tuesday appeared to continue that trend.

Before this week’s test, North Korea had not launched a missile since late November.

One day earlier, the U.S. and South Korea had announced they would be canceling their own upcoming joint military exercises because of the coronavirus epidemic — a decision the North did not make for its own army.

According to DPRK state media, the drills and the tests were both observed on-site by Kim Jong Un.

Seoul condemned the North’s missile tests, saying they were “not helpful to efforts to ease military tensions on the Korean Peninsula,” according to South Korea’s Yonhap News Agency.

That comment provoked scathing criticism from the senior DPRK official Kim Yo Jong — the sister of Kim Jong Un — who compared the country to a frightened dog.

“As the saying goes, a burnt child dreads the fire,” Kim Yo Jong said, according to KCNA.

“It does not take much knowledge or preparation to be able to talk about one of many North Korean launches with boilerplate talking points, such as a reaffirmation of our commitment to the defense of our allies,” said Oba.

“That President Trump wasn’t even able to muster that shows how wildly unprepared and disengaged he is on even the most basic of North Korea details.”

Correction at 1845 EST: This article has been updated to reflect that four of the words in President Trump’s comment were “no.”

U.S. President Donald Trump told reporters on Tuesday that he had "no reaction" to North Korea's latest missile launches, conducted on Monday according to the official Korea Central News Agency (KCNA).