North Korea “clearly” trying to build long-range, nuclear-capable missile: Esper
"We're conscious of what they're trying to do," the U.S. Secretary of Defense said on Friday
Jacob Fromer January 24, 2020 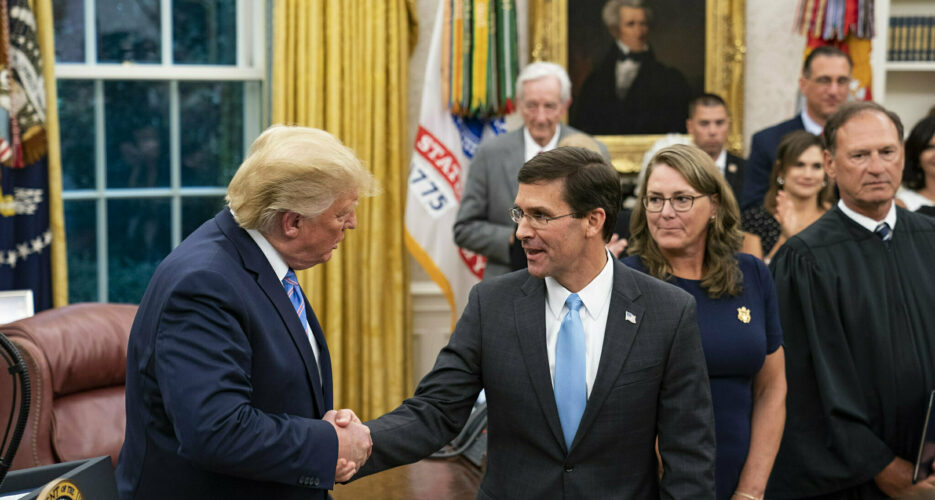 U.S. Secretary of Defense Mark Esper delivered a pointed assessment of North Korea’s weapons program on Friday: the country is “clearly” trying to build a long-range, nuclear-capable missile, he said.

It was an unusually candid public comment from a senior Trump administration official about the DPRK’s specific intentions — all the more so because President Trump has insisted in recent weeks that DPRK leader Kim Jong Un promised to give up his country’s nuclear weapons.

Speaking on Friday at the Center for Strategic and International Studies, a think tank in Washington, Esper was asked about Kim’s recent warning that the world would soon witness a “new strategic weapon” in North Korea.

The Defense Secretary seemed to imply that the U.S. knows exactly what that means.

“They have an aggressive R&D program and a test program, to say the least, and we monitor it very carefully and very closely,” Esper said. “We’re conscious of what they’re trying to do.”

“Clearly, they are trying to build a long-range ballistic missile with the ability to carry a nuclear warhead, if you will, on top of it,” he said. “So it’s something we’re watching very closely.”

One former U.S. official told NK News that Esper’s comments were striking because of the level of detail they included: few in Washington would deny that Pyongyang is pursuing nuclear weapons, but most members of the administration would not get so specific about what they know.

“To get into this level of detail about their specific objectives and capabilities is a little more unusual,” he said. “But we’ve seen that Esper perhaps has less of a filter with the press as others in the administration.”

Esper’s comments come as Washington and Pyongyang have been locked in a diplomatic stalemate for months.

Neither side seems willing to budge on a range of contentious issues including sanctions relief, the fate of the North’s nuclear weapons program, and the U.S. military presence on the Korean peninsula.

After a rare attempt at face-to-face negotiations in the fall ended without a deal — and with notably higher tension all around — it is unclear if the two countries have spoken directly in the months since.

The DPRK, at least publicly, has rejected the outreach.

Esper said on Friday that the current situation is still a far cry from the dangerous early days of the Trump administration, when Washington and Pyongyang were both threatening war.

“I will tell you, when I came into office two-and-a-half years ago, we were on a path to war with North Korea,” he said. “And the Army, everybody was preparing for a possible conflict.”

“And I think the outreach by the President these last couple of years has really forestalled that,” he added.

“At this point we need to get back to the negotiating table and really figure out the best way forward to denuclearize the peninsula.”

U.S. Secretary of Defense Mark Esper delivered a pointed assessment of North Korea's weapons program on Friday: the country is "clearly" trying to build a long-range, nuclear-capable missile, he said.

It was an unusually candid public comment from a senior Trump administration official about the DPRK's specific intentions -- all the more so because President Trump has insisted in recent weeks that DPRK leader Kim Jong Un promised to give up his country's nuclear weapons.