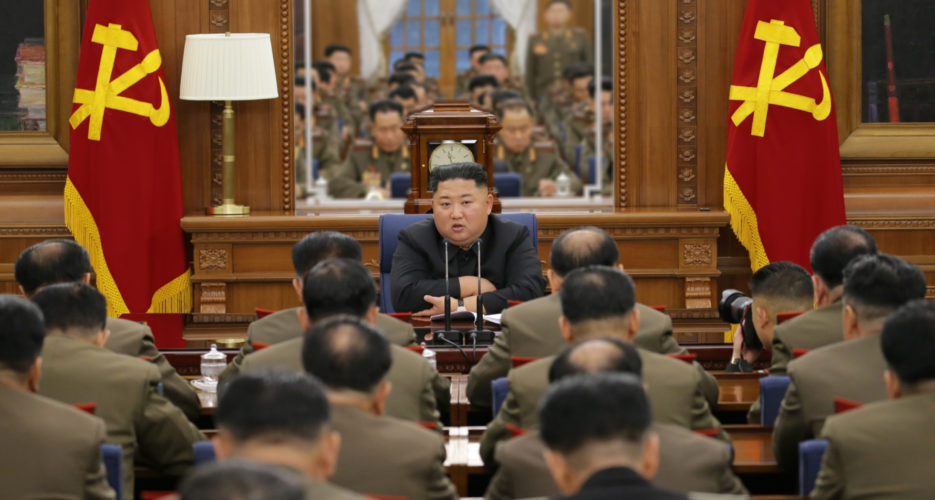 North Korean leader Kim Jong Un referenced a rise in tensions with other countries and said the military should be strengthened, state media reported on Sunday after a meeting of the country’s top military officials.

The comments were made in a report on the recently-held “Third Enlarged Meeting of the Seventh Central Military Commission (CMC) of the Workers’ Party of Korea (WPK),” which comes ahead of a planned plenary meeting of the WPK Central Committee before the end of the month.

The report only referenced in vague terms the tasks Kim set out for the CMC, and did not include detailed outcomes of the meeting.

There was also no indication of the much-speculated “new path” Kim Jong Un is expected to announce in the weeks ahead as his year-end deadline to see new concessions from the U.S. is set to run out.

But there was reference to “the complicated internal and external situation” and the “fast-changing situation,” saying it was being held at a “crucial” and ”turbulent time.”

As far as the tasks of the meeting, it was held to “decide on important organizational and political measures and military steps to bolster up the overall armed forces of the country including the People’s Army militarily and politically.”

This included the “decisive improvement of the overall national defence and core matters for the sustained and accelerated development of military capability for self-defence.”

The meeting also “reiterated and set forth from a new angle sectional tasks for beefing up the country’s defence capacity through strict implementation of the Party’s military line and policies.”

“The priceless data, experience and new technologies gained in the recent tests of defense science research will be fully applied to the development of another strategic weapon of the DPRK for definitely and reliably restraining and overpowering the nuclear threat of the U.S.,” Pak’s December 14 statement read.

In the latest CMC meeting Kim also appeared to criticize some aspects of the military’s performance, with the report saying the CMC should “rectif[y] irrational structure and defects in machinery and some shortcomings in other military and political activities.”

“Organizational and structural measures” were a primary aspect of the meeting as well, the Korean Central News Agency (KCNA) report said, with dismissals, transfers, and appointments of military commanding officers and corps commanders announced, but not listed.

Also under these tasks were “organizing or expanding and reorganizing new units” as well as “changing the affiliation of some units and changing deployment of units.”

State media had not specifically reported on the Second Enlarged Meeting of the Seventh CMC, though the first was held in May 2018.

That meeting was reported largely in similar terms as this week’s enlarged CMC meeting, with the focus on bolstering the military — though there were no mentions of a delicate or “turbulent” situation as in this week’s.

The Second Enlarged Meeting was likely the “emergency enlarged meeting” of the CMC held in September to discuss disaster prevention as Typhoon Lingling approached.

CMC shakeups were also made during the fourth party plenum this past April, with dismissals of CMC members and the appointments of Kim Jae Ryong, Ri Man Gon, Thae Jong Su, and Kim Jo Guk announced at the time.

It “confirms that North Korea will announce measures to strengthen its defense capabilities” in the plenum, she said, adding to “signals we have seen in state media over the past half year.”

“That Kim convened the CMC prior to the party plenum seems to have been aimed at two things: discussing military- and defense-related policies that will then be announced at the party plenum, and also at bolstering the military and the munitions industry.”

Lee added that it is likely the planned December plenum is underway following the CMC meeting, and could be reported in state media in the coming days.

North Korean leader Kim Jong Un referenced a rise in tensions with other countries and said the military should be strengthened, state media reported on Sunday after a meeting of the country’s top military officials.The comments were made in a report on the recently-held “Third Enlarged Meeting of the Seventh Central Military Commission (CMC) of the Workers' Party of Korea (WPK),” which