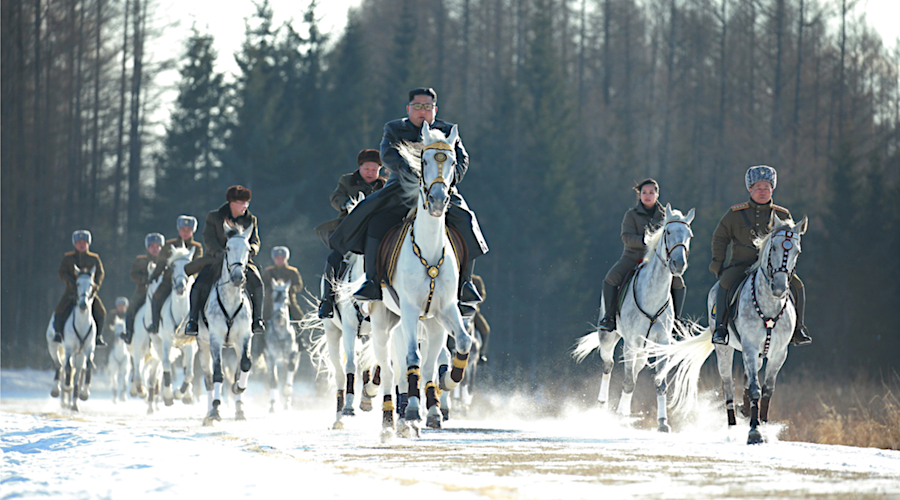 North Korean leader Kim Jong Un and top officials earlier this week toured sights around the politically-symbolic Paektusan area on horseback and scaled the mountain’s peak, state media reported on Wednesday, in an ideologically-charged appearance which follows a similar visit in October.

Kim’s tour of the site, which comes on the heels of a high-profile gala opening of the nearby “utopia” town in Samjiyon reported on Tuesday, was hailed as being of “remarkable historic significance” by the state-run Korean Central News Agency (KCNA).

“Kim Jong Un, the great leader of our revolution who opens up the period of a great leap for the development of the revolution, personally left the sacred trace in the revolutionary battle sites in Mt Paektu area… through knee-high virgin snow,” an English-language dispatch reported.

“Riding a steed across the vast area of Mt Paektu together with the commanding officers who accompanied him, he recollected the bloody history of the guerrillas who recorded dignity on the first page of the history of the Korean revolution by shedding their blood in the vast plain of Mt Paektu,” it continued.

Kim then stressed the need for the next generation to have a “proper understanding” of the history of the site, hailed in state lore as the birthplace of Kim’s father Kim Jong Il and a key military base for his grandfather Kim Il Sung during the anti-Japanese struggle of the 1930s.

The DPRK leader then urged them to “helped demonstrate the country’s dignity and honor before the world.”

At a time when “the imperialists and class enemies make a more frantic attempt to undermine the ideological, revolutionary and class positions of our Party,” he continued, “we should always live and work in the offensive spirit of Paektu.”

In a report loaded with political and ideological messaging, state media reported the North Korean leader had repeatedly reiterated the importance of learning from the “revolutionary” legacy of the country’s past struggles.

Kim had chosen to visit the site, state media reported, in order to steel the people “for the harshness and protracted character of our revolution.”

The visit, the report continued, was aimed at instilling the “indefatigable revolutionary spirit” of the mountain, at a time when the whole country has “turned out in the drive for building a powerful socialist country with the indomitable mental power of self-reliance.”

The trip was his second to the mountain’s peak this year, following a similar tour in October.

Analysts have previously noted that Kim Jong Un has often decided to visit Mt. Paektu ahead of major leadership decisions, with his tour this week coming just weeks before North Korea reaches its self-declared “end of year” deadline for long-stalled diplomacy with the U.S. to produce results.

In a stark reminder of that deadline on Tuesday, a top diplomat from the DPRK’s Ministry of Foreign Affairs (MFA) in a statement warned that it was up to the U.S. to decide what kind of “Christmas gift” it received from North Korea.

“[The DPRK] feels no need to hide what it will do from now on and therefore, reminds the U.S. once again that the year-end time limit comes nearer,” vice foreign minister Ri Thae Song was quoted as having said by the KCNA.

Kim likely made his visit to Mount Paektu this week with this deadline in mind, one expert told NK News.

“Another trip to the sacred mountain in rather quick succession comes as relations on the U.S. front appear to be heading toward cliff’s edge,” Peter Ward, a writer and researcher focused on North Korea’s economy and politics, said.

“There is a chance that the U.S. and North Korea will find a way to a deal, but the symbolism and rhetoric is very much of a leader sending a message to his own people and the outside world that he’s ready for confrontation,” he added.

“These photos were, like the last, deliberately released to the outside world,” Ward continued. “North Korea is a tremendously secretive state. If Kim Jong Un had wanted, this could have been kept for internal consumption only.”

“The fact that it wasn’t is a clear sign that it is meant at least partially to send a message to the outside world.”

North Korean leader Kim Jong Un and top officials earlier this week toured sights around the politically-symbolic Paektusan area on horseback and scaled the mountain's peak, state media reported on Wednesday, in an ideologically-charged appearance which follows a similar visit in October.Kim's tour of the site, which comes on the heels of a high-profile gala opening of the nearby "utopia"