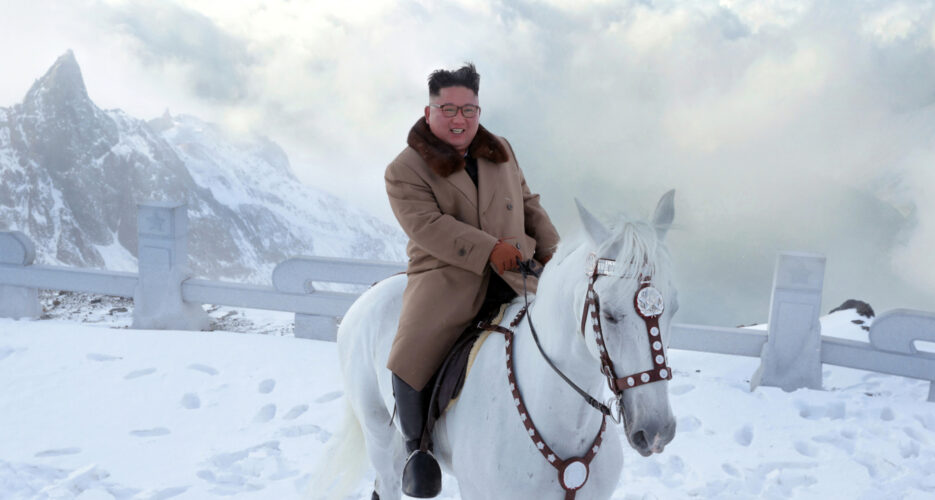 According to the report, the DPRK leader climbed the mountain on a white horse and rode through what was described as the mountain’s first snowfall of the year.

It was Kim Jong Un’s third visit to the fabled landmark — the highest peak on the Korean peninsula and hailed in North Korean propaganda as the birthplace of the DPRK leader’s father Kim Jong Il and the origin of the country’s revolutionary “Paektu” bloodline — since taking power.

“His march on horseback in Mt Paektu is a great event of weighty importance in the history of the Korean revolution,” KCNA reported.

Described as “sitting on horseback” at the top of the mountain, Kim Jong Un “recollected with deep emotion the road of arduous struggle he covered for the great cause of building the most powerful country with faith and will as firm as Mt Paektu and days of fast-paced changes.”

Kim, it continued, “took a bird’s-eye view of mountains like the high steep mountains of the revolution he should go over again in high spirits.”

“The eyes of Kim Jong Un standing up atop grandiose Mt Paektu were full of noble glitters of the illustrious commander who clearly indicates the road of advance of a powerful socialist country that is achieving prosperity with its own efforts and by dint of storm of Mt Paektu in the face of all headwinds.”

Analysts have previously noted that Kim Jong Un has often decided to visit Mt. Paektu ahead of major leadership decisions.

His most recent visit, in December 2017, came just a few weeks before he sent a diplomatic overture to South Korea and the U.S. in his January 1 New Year’s speech.

“Some South Korean observers noticed that Kim Jong Un normally goes to Paektu before making some important decisions, and given that there is no progress in talks with Washington, it looks like he has one to make,” Fyodor Tertitskiy, a senior researcher at Seoul’s Kookmin University said.

Wednesday’s report hinted that such a decision may be in the works.

“All the officials accompanying him were convinced with overflowing emotion and joy that there will be a great operation to strike the world with wonder again and make a step forward in the Korean revolution,” KCNA reported, while not naming the officials present.

Experts also told NK News that the flowery imagery in the report — the North Korean leader sitting gallantly on the back of a white horse, atop a snowy mountain summit — is likely meant to both evoke nostalgia and exude power.

“This may appear strange or comical to us, but it’s supposed to look epic and to project authority,” said Peter Ward, a contributing analyst to NK News‘s sister site NK Pro and a researcher focused on DPRK politics and the economy.

“It also replicates an existing image of Kimist power, so it may have that effect on some viewers,” he said.

“It was a part of his image and there is a chapter in his memoirs dedicated to a white horse.”

Minyoung Lee, a senior analyst with NK News’s sister site NK Pro, said that the details of Kim’s visit to Mt. Paektu may be meant to send a message related to current world events — particularly stalled nuclear negotiations with the U.S.

“It does appear as though they’re trying to say that Kim Jong Un came to Mt. Paektu to make a decision, or at least firm his resolve,” she said.

“Throughout the article, there are mentions of Kim Jong Un’s accomplishment of making the DPRK powerful, giving the DPRK ‘strength,’ how he did not succumb to the slightest temptations,” she continued.

“Obviously strength and power can come from the economy as well as the military.”

Reports of the visit coincided with news of an on-the-spot guidance in the nearby city of Samjiyon, currently one of the country’s most high-profile construction projects.

North Korean leader Kim Jong Un this week scaled the country's politically-symbolic Paektu Mountain, according to a report released Wednesday by the DPRK's state-run Korean Central News Agency (KCNA).According to the report, the DPRK leader climbed the mountain on a white horse and rode through what was described as the mountain’s first snowfall of the year.It was Kim Jong Un’s third