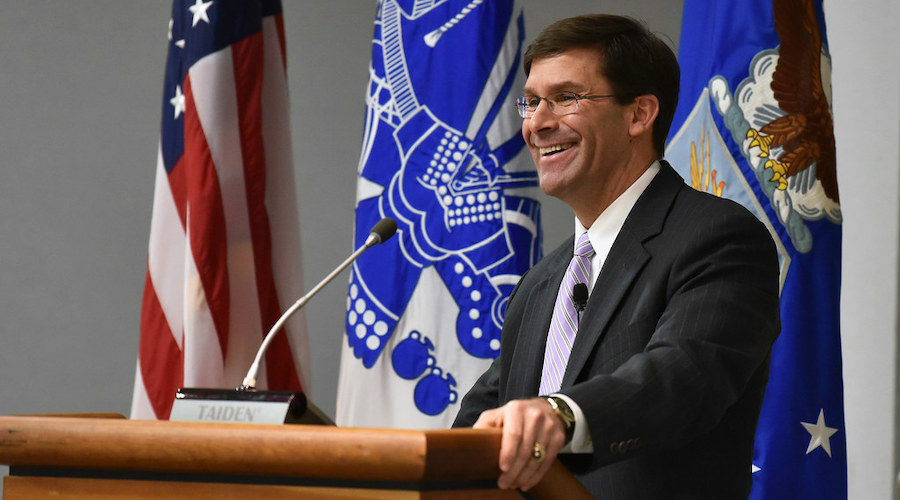 United States Secretary of Defense Mark Esper will travel to South Korea next week to address an ongoing dispute over intelligence sharing between Seoul and Tokyo as well as other issues, the Pentagon said Thursday.

A press statement also released by the Pentagon on Thursday did not specify exactly when Esper will arrive in Seoul, but said he will depart Washington on November 13 “to visit South Korea, Thailand, the Philippines, and Vietnam.”

In addition to the Japan-South Korea General Security of Military Information Agreement (GSOMIA), another issue likely on the agenda is the upcoming joint U.S.-South Korea military drills.

Recent increased demands from Washington that Seoul pay more in its cost-sharing agreement for U.S. troops stationed in the country and along the inter-Korean border have also stirred up anger in the South, and could also be discussed in Esper’s trip.

Speaking at a press briefing Thursday, Assistant to the Secretary of Defense for Public Affairs Jonathan Hoffman said he could “practically guarantee” the issue of South Korea backing out of its GSOMIA with Japan, and its fast-approaching expiration, will be discussed in Seoul.

“It’s something that we would like to see resolved so that all of us can focus on the biggest threats in the region, which is North Korea’s activities and then the Chinese efforts to destabilize the region,” Hoffman said.

“We’ve tried to work around some of this with regard to being able to do some of the bilateral information sharing between each of us to try to keep going through it, but I will say I’m assuming it’s been a topic that the Secretary has raised with his counterparts from Japan and Korea persistently as this issue has come up,” he added.

The Pentagon press release said broadly that Esper will in Seoul attend “the 51st U.S. – ROK Security Consultative Meeting … to discuss the Alliance and reaffirm our commitment to enhancing our bilateral defense cooperation” as it relates to the security of the Korean peninsula.

His visit will come just ahead of renewed joint air force exercises between the U.S. and South Korea, which was also addressed in the Pentagon press conference.

“It’s a reduced scope from the former Vigilant Ace exercises,” said Joint Staff vice director Rear Adm. William Byrne, Jr. The same exercise was canceled in 2018 as a concession by the Trump administration following the first summit with Kim Jong Un that June.

Its resumption this year, Byrne Jr. said, is “in order to maintain that readiness, maintain that integration so that we’re ‘ready to fight tonight,’ while allowing our diplomats the space and the room to continue negotiations with North Korea.”

Esper’s trip follows U.S.-ROK engagement earlier this week between other departments of the two governments, including a visit by State Department officials related to military cost-sharing as well as GSOMIA.

U.S. Assistant Secretary of State David Stilwell visited both Tokyo and Seoul in recent weeks to discuss the issues, while a negotiator on the cost-sharing issue with the State Department James DeHart also visited Seoul earlier this week.

In May, President Trump announced at a political rally that he wanted South Korea to pay “the rest of” what he believed was “$5 billion dollars” in costs the U.S. is spending per year to maintain its presence in the country.

Trump’s figures were incorrect, however, at more than double the total cost spent on the joint operations, but South Korean media reported this week upon DeHart’s arrival that the Trump administration has nonetheless been pushing Seoul to actually pay the $5 billion.

Secretary Esper made his first visit to Seoul in August after taking the job earlier this year, meeting President Moon Jae-in and his counterpart South Korean Minister of National Defense Jeong Kyeong-doo during his stay.

United States Secretary of Defense Mark Esper will travel to South Korea next week to address an ongoing dispute over intelligence sharing between Seoul and Tokyo as well as other issues, the Pentagon said Thursday.

A press statement also released by the Pentagon on Thursday did not specify exactly when Esper will arrive in Seoul, but said he will depart Washington on November 13 “to visit South Korea, Thailand, the Philippines, and Vietnam.”