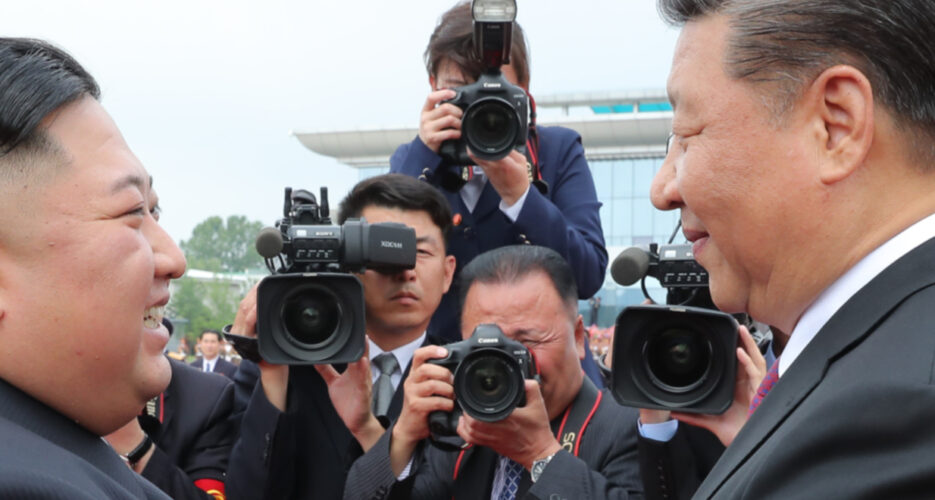 A delegation representing the People’s Daily, an organ of the ruling Chinese Communist Party (CCP), arrived Monday as another delegation for the official state news agency Xinhua left the same day.

KCNA did not, however, report on the details of either delegation’s visits, though the two countries have this year expressed interest in boosting cooperation in multiple exchanges in the media sphere.

The People’s Daily delegation, led by editor-in-chief for the outlet’s overseas edition Wang Huimin, are likely to meet with their counterparts in the ruling Workers’ Party of Korea’s (WPK) daily newspaper the Rodong Sinmun during their stay in Pyongyang.

The two leading party dailies last made high-level contacts in Beijing in August, when its officials were said to be on hand for a meeting between a visiting Rodong delegation led by Deputy Editor-in-Chief Kim Jin Su and a top CCP Central Committee member.

Prior to that, an official with the DPRK’s Journalists Union of Korea visited the People’s Daily offices in June to meet with Wang Huimin’s predecessor in that role and discuss boosting media exchanges.

The People’s Daily describes such exchanges in general on its website as part of reforms in its external relations and as being in line with China’s reform and opening up policy.

Xinhua’s delegation, which arrived last Friday led by the agency’s vice president Zhang Sutang, would have likely met with their counterparts in the KCNA.

The North’s primary news agency refrained from reporting on details of any meetings between the two over the weekend, however, instead only detailing the Xinhua delegation’s visit to tourist spots around Pyongyang.

But as Zhang’s trip to North Korea immediately followed one to Hanoi last week in which Xinhua and Vietnam’s top news agency discussed deepening cooperation and exchanges, it is possible their agenda in Pyongyang was of a similar nature.

Xinhua currently runs a bureau out of Pyongyang and regularly reports on economic and tourist locations to which it receives invitations and permission to visit, like all foreign news bureaus operating out of North Korea.

China’s media exchanges with North Korea this week follows the signing of a new agreement between KCNA and Russia’s state news agency TASS in Pyongyang earlier this month, at which KCNA Director General Kim Chang Gwang said he hoped to receive help from the Russians in fighting what he called “fake news” coverage of his country.

The Russian government and media executives as part of the delegation also raised eyebrows due, in part, to their being seen wearing loyalty badges to the North Korean leadership throughout their trip.

The Xinhua delegation was not seen wearing such badges in images of their tour around Pyongyang over the weekend.

Meanwhile, as part of a steady stream of exchanges between the two countries in various fields throughout the year, other North Korean officials are in China this week participating in education and military exchanges.

The chairman of Kim Il Sung University Choe Sang Gon was reported by KCNA to have also left for China on Monday leading a DPRK-China Friendship Parliamentary Group delegation, while the vice-minister of the DPRK People’s Armed Forces has been participating in a defense forum in Beijing this week.

A delegation representing the People’s Daily, an organ of the ruling Chinese Communist Party (CCP), arrived Monday as another delegation for the official state news agency Xinhua left the same day.