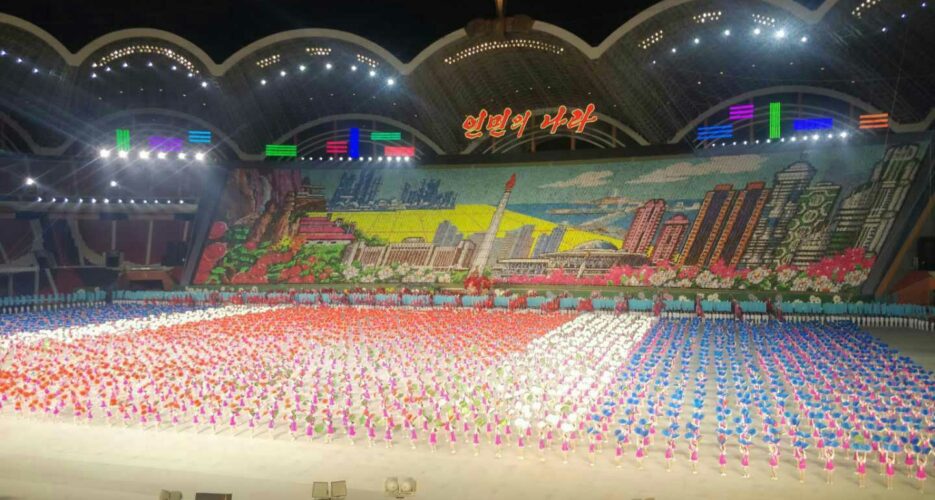 Updated at 08:40 KST to include Kim Jong Un’s criticism of the performance published in North Korean state media

The “grand mass gymnastics and artistic performance” event ended with a section dedicated to Kim Jong Un and featured his portrait for the first time, sources in attendance said.

The move is likely to raise speculation over Kim’s solidifying of propaganda around him in a similar manner to his father and grandfather, following the first and only appearance of an official illustrated portrait of the current leader during the visit of the Cuban president last year.

One was the omission of a section from last year focused on summits between Kim and South Korean President Moon Jae-in, both sources said.

And following last year’s inclusion of a new drone light show and 3D-projected images on the floor of May Day Stadium where the event is held, this year also included new high-flying acrobatic performances, they added.

But similar to last year, Korean unification remained a theme, and references to North Korea’s nuclear, satellite, or missile programs were once again not featured, though military themes in general remained.

When Kim Jong Un’s portrait was displayed in the flip-card background controlled by over 11,000 students, a song about Kim Jong Un was played as well, according to the Koryo Tours representative.

The portraits of Kim Il Sung and Kim Jong Il were also featured, as they have been in previous years, in the sections prior to the revealing of Kim Jong Un’s portrait, they continued.

In the section typically dedicated to friendship with foreign nations, Vietnam was particularly highlighted, they added – following Kim’s summit in Hanoi earlier this year.

It is also likely that a delegation from the Central Theory Council of the Communist Party of Vietnam currently in Pyongyang attended the event.

Alongside Kim watching the performance, sources said, were his wife Ri Sol Ju and sister Kim Yo Jong, who has been the subject of media speculation after she did not travel to Vladivostok for her brother’s summit with Russian President Vladimir Putin in April.

“After the performance, [Kim Jong Un] called creators of the performance and seriously criticized them for their wrong spirit of creation and irresponsible work attitude, pointing to the contents and forms of works,” the article on the front page of the party-run daily Rodong Sinmun said.

“Noting that the creators and artistes in the literature and art sector have a very important duty in socialist cultural construction, he set forth important tasks for correctly implementing the revolutionary policy of our Party on literature and art,” it added.

Minyoung Lee, an analyst with NK News‘s sister site NK Pro, said the unusual criticism of a cultural performance “builds on state media’s noticeably increased emphasis of the importance of carrying out propaganda work ‘in a novel way.'”

This, she said, is a “principle that Kim Jong Un stressed in his letter to a national propaganda functionaries’ meeting in March.”

Lee added that as the mass games are a concentration of party propaganda work in general, such criticism tracks with Kim’s recent focus on the subject.

State media previously announced the event will go on until mid-October, with tour companies previously suggesting it could run at least five times per week.

While it is praised as a symbol of socialist “single-minded unity” in state media, the event has also received fresh criticism from one high-profile North Korean defector in recent days.

Former North Korean deputy ambassador to the UK Thae Yong-ho said at the Oslo Freedom Forum in Norway last week that the mass games were a “forced exercise” for school children, according to the Guardian.

“You should know that it means the children, aged from six to nine, cannot go to school for six months,” he said, adding that the issue should be raised “with the European companies – these are inhumane displays.” 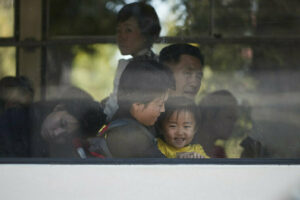