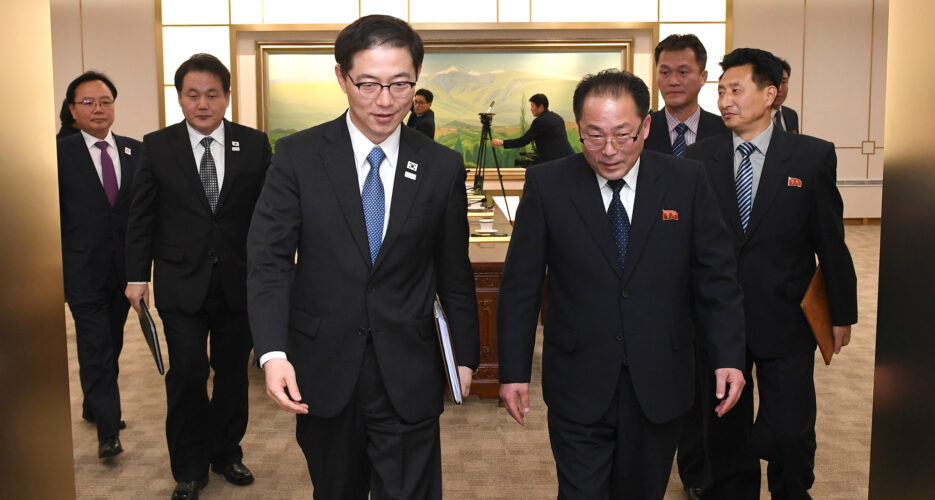 No director-level meetings have been held at an inter-Korean liaison office at Kaesong for almost two months, South Korea’s Ministry of Unification (MOU) confirmed on Friday, in a further sign of a deepening diplomatic impasse between Seoul and Pyongyang in the aftermath of February’s failed U.S.-DPRK summit in Hanoi.

Seoul and Pyongyang previously agreed to hold weekly meetings between their respective directors of the round-the-clock liaison office, though talks have not been held since February 22.

Chun and Jon, who serves as vice-chairman of North Korea’s Committee for the Peaceful Reunification of the Country (CPRC), have not sat face-to-face since January 25.

The vice unification minister, however, did hold a meeting with Jon’s stand-in, deputy director Hwang Chung Song — a department director at the CPRC — on February 22.

National holidays in the two Koreas previously prevented meetings from taking place for the first two weeks of March, with the South having marked the 100th anniversary of the March First Independence Movement on March 1 and the North marking International Women’s Day on March 8.

April 5, too, is a public holiday in the North: marking Chongmyong, one of 24 official seasonal divisions in Korea.

Kim Kwang Song on April 1 originally returned to the office in the aftermath of North Korea’s abrupt withdrawal of its personnel from the facility in March.

During a briefing Friday, the MOU said director-level meetings are not typically held when the temporary deputy director is on duty.

“Although the director-level meetings have not been held, the necessary consultation between the two Koreas continue to proceed normally,” spokesperson Lee insisted.

“The function of the inter-Korean joint liaison office focuses on discussing the implementation of Panmunjom Declaration or Pyongyang Joint Declaration as well as pending issues of inter-Korean exchanges and cooperation.”

The news comes as the one-year anniversary of last April’s Panmunjom Declaration signing looms, with the unification ministry on Friday saying it was set to unveil plans for a commemorative event “soon.”

Lee declined to confirm whether Seoul will hold a joint commemorative event with Pyongyang, however.

News of the suspension of director-level meetings also comes as DPRK state-run externally-oriented online outlets this week reiterated the importance of “national independence” in improving inter-Korean relations this week.

The Uriminzokkiri on Friday, for example, accused Seoul of having engaged in “absurd behavior… spoiling the favorable atmosphere of reconciliation” by involving the U.S. in inter-Korean issues.

“If the two Koreas hold firmly hold hands based on the united power of the fellow countrymen, all kinds of external sanctions and pressures and any challenges and hardships cannot block our prospects of finding a way out to achieve national prosperity,” the article, written by an unnamed reporter, read.

Wednesday also saw the Urimizokkiri stress that inter-Korean issues must be “resolved thoroughly based on the principle of national independence” in a contribution written by journalist Hong Song Hun, while another external online outlet, the Arirang-Meari, struck a similar tone.

Uriminzokkiri on Tuesday also denounced Seoul’s hopes to serve as a “mediator” between the U.S. and North Korea, and the unification ministry’s plans to create “virtuous circle between inter-Korean and DPRK-U.S. relations.”

This stepping-up of rhetoric follows North Korean leader Kim Jong Un’s denunciation of the South Korean government for acting as a “meddlesome ‘mediator’ and ‘facilitator’” in a policy speech delivered last week.

DPRK external media this week also criticized the ROK government for its position that the implementation of inter-Korean economic cooperation projects must be carried out within the framework of international sanctions.

North Korean outlet have also condemned the ROK Ministry of Foreign Affairs (MOFA)’s plans to create the new position of director for export control and sanctions under the Director-General for Nonproliferation and Nuclear Affairs and to create a new department focused on sanctions enforcement.

“This is the treacherous act of evading the implementation of the North-South Korean declarations,” the Uriminzokkiri said. “The South Korean authorities should now make an attitude and stance correct bearing in mind our repeated advice.”

The Arirang-Meari on Wednesday, too, warned that Seoul will face “unfavorable consequences of facing the situation where it will be surrounded by enemies on all sides if it follows the foreign power and evades the implementation of  inter-Korean declarations.”

No director-level meetings have been held at an inter-Korean liaison office at Kaesong for almost two months, South Korea's Ministry of Unification (MOU) confirmed on Friday, in a further sign of a deepening diplomatic impasse between Seoul and Pyongyang in the aftermath of February's failed U.S.-DPRK summit in Hanoi.Seoul and Pyongyang previously agreed to hold weekly meetings between their