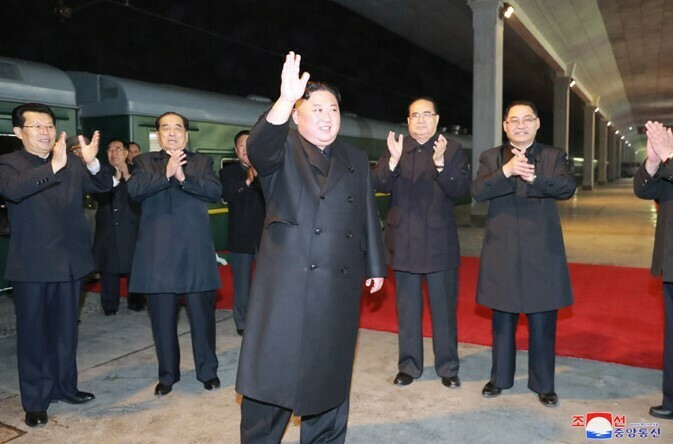 North Korean leader Kim Jong Un on Wednesday left Pyongyang by private train for what will be his first ever summit with Russian President Vladimir Putin, the state-run Korean Central News Agency (KCNA) reported on the same day.

Kim Jong Un departed at “early dawn,” state media said, and is accompanied by a number of top officials.

Among them are foreign minister Ri Yong Ho and vice-chairmen of the Workers’ Party of Korea (WPK) Central Committee Kim Phyong Hae and O Su Yong, according to KCNA.

North Korean media on Tuesday reported for the first time that Kim was set to visit Russia for talks with Putin “soon,” while the Kremlin later confirmed the summit was set for April 25.

Kim Jong Un’s train was later confirmed by sources to Russia’s Interfax News Agency, among other outlets, to have crossed the border into Russia Wednesday morning.

Kim reportedly got off the train at Khasan Station, where he was greeted by Russian women in traditional dress offering bread and salt, as is custom, Interfax reported.

He also entered a small Russia-DPRK friendship house built for Kim Il Sung’s 1986 visit to the region, according to the news agency.

Meanwhile preparations continued on Tuesday in Vladivostok, as additional security measures around the site of the summit have been stepped up and the city announced traffic changes indicative of Kim Jong Un’s arrival time to the main train station.

The official website of the Primorsky Krai Emergency Situations Ministry announced Tuesday that the waters off Russky Island near the Far Eastern Federal University (FEFU) would be closed to small ships from early Wednesday through Friday.

This follows earlier reports of increased security since last Wednesday on the FEFU campus itself, which has limited access to non-students and faculty.

With Kim expected to arrive at the main train station at the southern tip of downtown Vladivostok – supported by reports in various media of sudden construction work at the station to allow the North Korean leader’s personal limousine to enter and exit – the city has also announced changes to bus routes surrounding the station.

On Tuesday evening, the official website of the city’s administration posted news that buses will have to avoid the main streets in front of the station from 1600 to 1900 local time – possibly the time which Kim Jong Un is expected to arrive.

Vladivostok News also reported the closure of platforms 1 and 2 at the station after 1500 local time Wednesday, with the public only able to utilize platforms 3 and 4.

But as the likely Wednesday evening start to the summit approaches, other North Korean officials and personnel are expected to arrive ahead of Kim Jong Un’s train.

Possibly confirming speculation last week over the purpose of an Air Koryo flight from Pyongyang to Vladivostok registered for Tuesday morning outside of its regular schedule, Interfax reported that an unnamed number of Kim Jong Un’s bodyguards arrived by plane in the morning.

The official website of the Vladivostok International Airport listed one such passenger flight arriving at 1100 an departing at 1150 under flight number JS371/372 – instead of the JS271/272 for the regular Monday/Friday schedule – but did not list an IL-76 transport plane reported by Japan’s NHK World to have also arrived Tuesday morning.

Updated 1030 KST to include details of Kim Jong Un's arrival at the Russian borderNorth Korean leader Kim Jong Un on Wednesday left Pyongyang by private train for what will be his first ever summit with Russian President Vladimir Putin, the state-run Korean Central News Agency (KCNA) reported on the same day.Kim Jong Un departed at "early dawn," state media said, and is accompanied by a