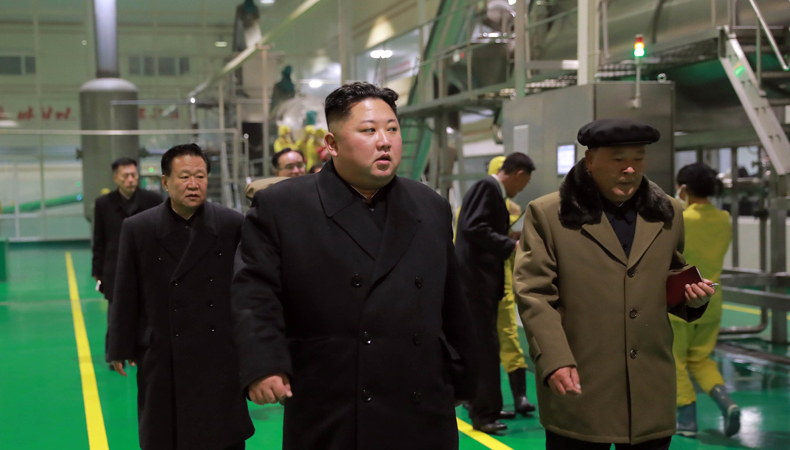 The U.S. may seek to impose further sanctions on North Korea if Kim Jong Un does not prove his commitment to denuclearization, U.S. National Security Adviser John Bolton said in an interview on Fox Business Tuesday evening.

Praising President Donald Trump’s decision last week “not to agree to a bad deal with North Korea in Hanoi,” Bolton told Lou Dobbs that the U.S. would be watching closely for signs that North Korea is willing to return to the negotiation table.

“Fundamentally,” Bolton said, the U.S. is waiting to see “whether they’re committed to giving up their nuclear weapons program and everything associated with it.”

“That’s what we think they need to do. If they’re not willing to do it, then I think President Trump has been very clear, they’re not gonna get relief from the crushing economic sanctions that have been imposed on them.”

“And we’ll look at ramping those sanctions up, in fact,” Bolton added.

He did not clarify, however, whether the U.S. is still willing to provide partial sanctions relief for denuclearization steps short of immediate, full-scale dismantlement.

Bolton accused North Korea in the interview of attempting to win a deal in Hanoi that would allow the country to regain access to international markets through sanctions relief while still maintaining their nuclear program.

But he also projected continued reliance on the top-down approach to making progress in negotiations, saying North Korea should make the next move and that “the President’s ready to make a deal, he’s ready to meet again.”

“He’s pointed to that bright economic future and if Kim Jong Un decides he wants to take advantage of it, the President’s ready to talk to him,” Bolton said.

When asked how he sees China’s role in the negotiations following the breakdown in talks in Hanoi, Bolton repeated the refrain that Beijing needs to do more to rein in North Korea given their uniquely close relationship with Pyongyang.

“China could do a lot more to explain to Kim Jong Un that [North Korea] would see a lot more interest by China if Kim Jong Un would give up those nuclear weapons.”

Kim Jong Un did not stop in Beijing to meet President Xi Jinping on his return train journey through China earlier this week, arriving in Pyongyang at around 0300 Tuesday morning.

There is speculation, however, that just as the two leaders met around a week after the Singapore summit, they may meet again in the coming weeks to discuss the outcomes of the Hanoi summit.

Also on Tuesday, State Department spokesperson Robert Palladino said the U.S. “remain[s] in regular contact” with North Korea, but would not confirm or deny whether the two sides had made contact since returning from Hanoi.

He said that “progress was made at the Hanoi summit,” and while no agreement was reached, the U.S. was “able to exchange very detailed positions, and that has narrowed the gap on a number of issues.”

Palladino confirmed that Special Representative for North Korea Stephen Biegun will hold talks in Washington with both his South Korean counterpart Lee Do-hoon and Japanese counterpart Kenji Kanasugi on Wednesday.

The U.S. may seek to impose further sanctions on North Korea if Kim Jong Un does not prove his commitment to denuclearization, U.S. National Security Adviser John Bolton said in an interview on Fox Business Tuesday evening.Praising President Donald Trump’s decision last week “not to agree to a bad deal with North Korea in Hanoi,” Bolton told Lou Dobbs that the U.S. would be watching