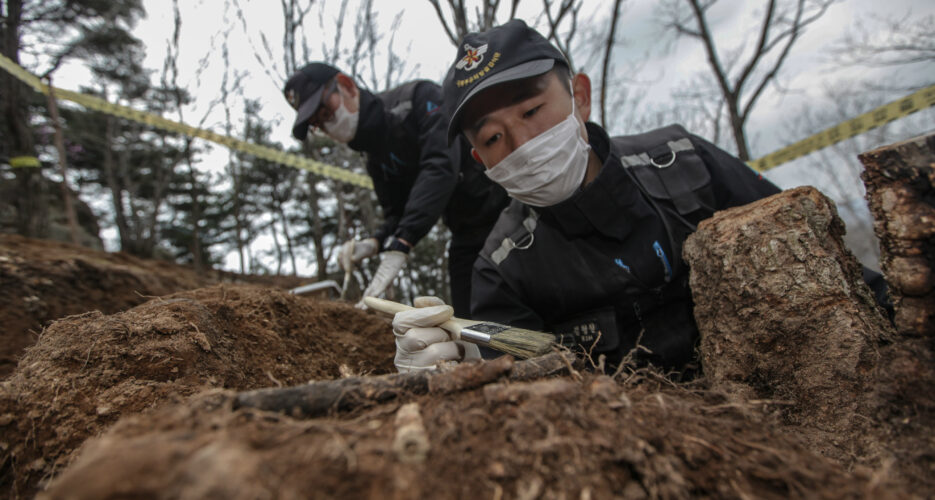 North and South Korea are yet to notify the other of the planned composition of their joint remains recovery teams, the ROK Ministry of National Defense (MND) confirmed to media on Monday, in a move which sees the two side miss a deadline agreed to in last year’s inter-Korean military agreement.

Seoul and Pyongyang agreed to jointly recover remains of soldiers killed during the Korean War at a pilot site in the demilitarized zone (DMZ) from April 1 to October 31 in a comprehensive military agreement signed in September last year.

To proceed with a pilot project, the two sides agreed to complete the composition of the joint remains recovery team and notify the other by the end of February.

South Korean defense ministry spokesperson Choi Hyun-soo during a regular press briefing on Monday said Seoul is “in consultation” with Pyongyang over the list.

The two Koreas are also yet come to an agreement on a planned Inter-Korean Joint Military Committee, agreed to in last September’s Pyongyang Joint Declaration.

In spite of the postponement, the ROK MND stressed there will be “no great setbacks” for the two Koreas to kick off the pilot project to recover remains in the DMZ in April.

“I do not consider it (delay) as a huge problem as multiple issues could take place to each other at the working-level [negotiations].”

The joint remains recovery team would consist of between 80 and 100 personnel from each side, along with a five-member joint investigation team and a site command team led by a colonel-level official.

Both sides are preparing to discuss pending issues including the composition, number of the investigation team, and ways to bring in equipment, Choi said.

“We plan to have a concrete discussion with regard to the issue,” the MND spokesperson said, adding that the ministry will share further information when an agreement is made.

The reason for the delay remains unclear: both sides previously wrapped up a two-month mine sweeping operation near the DMZ’s Hill 281/Arrowhead Ridge in Cheorwon County, Gangwon Province by the end of November as part of preparations for a pilot joint remains recovery project.

The two Koreas also completed the destruction of 20 guard posts (GPs) located within one kilometer of each other in DMZ on November 30, and began an agreed-to suspension of military exercises near the border and the operation of a designated no-fly zone along the military demarcation line (MDL) on November 1.

But amid preparations for a high-profile summit between U.S. President Donald Trump and DPRK leader Kim Jong Un, inter-Korean issues appear to have taken a backseat.

February saw the DPRK notify Seoul that it would not be able to hold a joint event to mark the 100th anniversary of the beginning of the March First Independence Movement Day, previously agreed to in September’s Pyongyang declaration.

Plans for the delivery of Tamiflu to the North, too, have seen major delays, with the MOU on February 11 saying the delivery was yet to take place because discussions with North Korea were “not yet completed.”

The Pyongyang Joint Declaration’s agreement last year to “give priority to resolving the issue of video reunions and exchange video messages” between families separated by the Korean War has also been put on hold.

“That is not true,” Baik told assembled media. “The process of consultation over the video reunion with concerned countries is currently underway.”

“When relevant procedures are complete, we plan to discuss measures to implement the Pyongyang Joint Declaration including video reunions and exchange of video messages with the North,” he added, saying Seoul expects a good outcome “in the near future.”

Speaking at a conference hosted by the Korea Institute for National Unification (KINU) in December last year, President of the Korean Red Cross Park Kyung-seo said South Korea and the U.S. had been in discussions over possible sanctions exemptions to allow video reunions.

Seoul has said it intends to push ahead with plans to hold video reunions of separated families early this year.

North and South Korea are yet to notify the other of the planned composition of their joint remains recovery teams, the ROK Ministry of National Defense (MND) confirmed to media on Monday, in a move which sees the two side miss a deadline agreed to in last year's inter-Korean military agreement. Seoul and Pyongyang agreed to jointly recover remains of soldiers killed during the Korean War