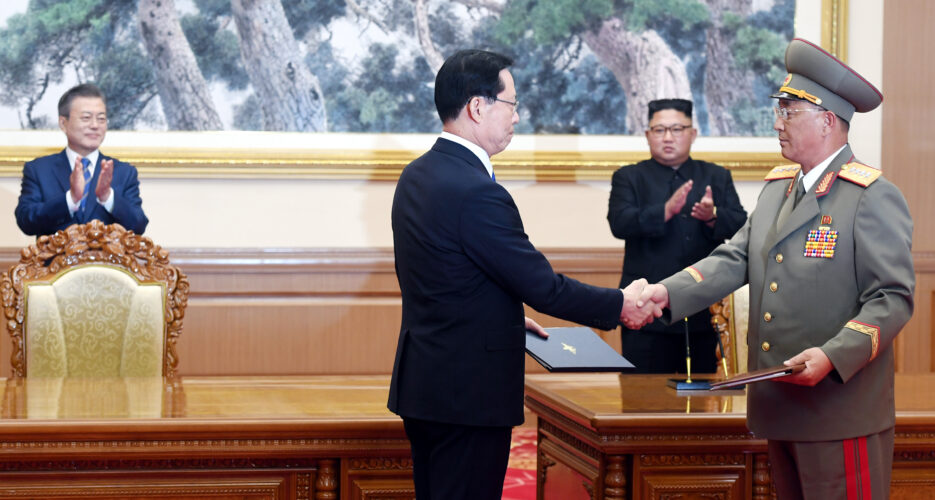 Seoul and Pyongyang agreed to suspend army training exercises near the inter-Korean border and “withdraw all guard posts” in the demilitarized zone (DMZ), in a broad military agreement signed on Wednesday.

The so-called “Agreement on the Implementation of the Historic Panmunjom Declaration in the Military Domain” was signed by Minister of National Defense Song Young-moo and North Korean Minister of the People’s Armed Forces No Kwang Chol in Pyongyang.

The agreement followed the signing of the separate “Pyongyang Declaration” by DPRK leader Kim Jong Un and ROK President Moon Jae-in, and came on the second day of a three-day inter-Korean summit in the North Korean capital.

“Through this agreement, the South and the North can practically resume a preliminary level of operational arms control,” he said.

The two Koreas committed on Wednesday to “completely cease all hostile acts against each other in every domain, including land, air, and sea that are the source of military tension and conflict” – also agreed to in April’s Panmunjom Declaration.

Seoul and Pyongyang have agreed to “cease various military exercises aimed at each other along the Military Demarcation Line (MDL)” after November 1.

This will include “all artillery drills and field training exercises at the regiment level and above within 5km from the MDL.”

Both sides will also “install covers on the barrels of coastal artilleries and ship guns,” as well as halt all-live fire and maritime maneuvers in designated maritime areas.

The North and South Korean militaries also agreed to “preclude the use of military force under any circumstance,” pledging to resolve all issues that might result in conflict in a peaceful manner.

“The two sides agreed to refrain from any action to infiltrate, attack or occupy each other’s area of jurisdiction by any means or method,” the agreement reads.

To prevent any accidental military clashes, Seoul and Pyongyang plan to operate an “Inter-Korean Joint Military Committee” and consult with the other on issues including “large-scale military exercises… as well as reconnaissance activities against each other.”

Both sides will also continue the “installation and operation of direct communication lines” between military authorities, and agreed to “devise substantive military measures to transform the DMZ into a peace zone.”

The North and South Korean military have also agreed to “withdraw all guard posts within the DMZ.”

Following the release of the agreement, the South’s Ministry of National Defense (MND) said the two sides will remove 11 guard posts located within one kilometer of eachother by the end of this year.

Demilitarization of the Joint Security Area (JSA) in the truce village of Panmunjom will also go ahead, the MND said, adding that a trilateral consultation body between the two Koreas and the United Nations Command (UNC) will be established.

The two Koreas plan to carry out a “pilot project of an Inter-Korean Joint Operation Recover Remains”: the first of its kind since the division of the peninsula.

The trial project will be implemented in Cheorwon area in Gangwon Province.

“We can take military measures to achieve the purpose of the ‘armistice agreement’ by making the demilitarized zone into peace zone for the first time in 65 years,” the defense ministry said in a separate statement.

The inter-Korean military agreement will also see the establishment of a peace zone near the disputed maritime border on the western coast.

The two Koreas have reportedly “agreed to take military measures to prevent accidental military clashes and ensure safe fishing activities by turning the area around the Northern Limit Line in the West Sea into a maritime peace zone.”

Conflicts have continued over the years in what the North describes as “hot spot waters in the West Sea.”

These clashes have resulted in, among others, the two battles of Yeonpyeong in 1999 and 2002, as well as the sinking of the ROK warship Cheonan and the bombardment of Yeonpyeong Island by the North in 2010.

The two Koreas will under Wednesday’s agreement “establish a maritime peace zone and a pilot joint fishing zone in the West Sea” and “fully guarantee the safety of personnel and vessels.”

The North and South Korean militaries agreed at working-level military talks earlier in the month that the specific area of maritime peace zone and joint fishing zone will be decided by the Inter-Korean Joint Military Committee.

Seoul and Pyongyang agreed to suspend army training exercises near the inter-Korean border and "withdraw all guard posts" in the demilitarized zone (DMZ), in a broad military agreement signed on Wednesday.

The so-called “Agreement on the Implementation of the Historic Panmunjom Declaration in the Military Domain” was signed by Minister of National Defense Song Young-moo and North Korean Minister of the People’s Armed Forces No Kwang Chol in Pyongyang.