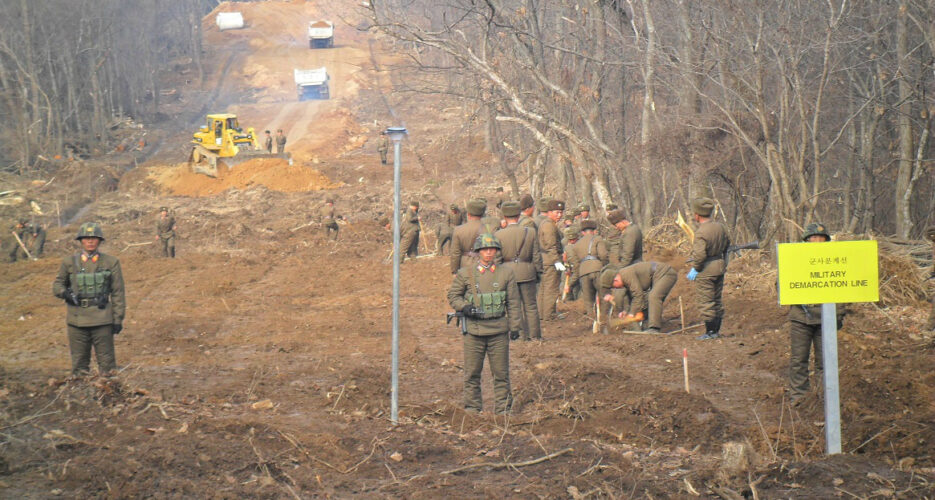 The South Korean military will independently push ahead with inter-Korean plans for remains recovery in the demilitarized zone (DMZ) next week, the ROK Ministry of National Defense (MND) said on Friday, amid silence from North Korean counterparts over the project.

The two Koreas previously agreed to push ahead with joint remains recovery operations at a pilot site between April 1 and October 31 this year in a comprehensive military agreement signed last September.

But as the April 1 deadline loomed and with no response from the North on the project, the ROK MND on Friday said it was reviewing how to carry out the inter-Korean plans alone.

Monday will, as a result, see the ROK military proceed with “basic excavation work” in preparation for the joint recovery operations at the DMZ’s Hill 281/Arrowhead Ridge in Cheorwon County, Gangwon Province.

Seoul will also also remove landmines in the area, following a two-month mine sweeping operation conducted between October and November last year.

The MND said the South Korean military on March 6 notified North Korean counterparts that it had completed the composition of its joint remains recovery team, which the two sides originally agreed to finish by the end of February.

Seoul then proposed that inter-Korean general-level military talks be held on March 18 to discuss ways to carry out the military agreement.

South Korean Minister of National Defense Jeong Kyong-doo at a meeting of the National Security Council (NSC) earlier the month expressed his hope that such talks would go ahead.

The MND on Friday also announced that the military had been forced to postpone plans for the joint use of Han/Imjin River Estuary due to the lack of response from the North.

The two Koreas originally agreed that they would allow civilian vessels to freely navigate in the joint utilization zone on a trial basis from April 1 at working-level talks in January.

“Our side has been making every preparation thoroughly so that relevant measures can be implemented expeditiously in case the North responds,” the ROK MND said in a written statement.

“We will put our best efforts to smoothly push forward projects which are scheduled to be implemented this year at the ‘military agreement of September 19.’”

The two Koreas last November completed the destruction of 20 guard posts (GPs) located within one kilometer of each other in DMZ — a key clause of the deal.

Both also began an agreed-to suspension of military exercises near the border and the operation of a designated no-fly zone along the military demarcation line (MDL) on November 1.

Since then, however, progress has been slim, with plans to allow visitors and tourists to freely move in the JSA put on hold.

There has also been little movement on plans to establish an Inter-Korean Joint Military Committee, which the two sides planned to use as a platform to discuss pending issues of concern.

The South Korea military’s decision comes amid an impasse between Seoul and Pyongyang in the aftermath of last month’s second DPRK-U.S. summit in Hanoi.

The Ministry of Unification (MOU) on Friday confirmed that director-level meetings at the inter-Korean joint liaison office at Kaesong, too, had not been held for five weeks.

The South Korean military will independently push ahead with inter-Korean plans for remains recovery in the demilitarized zone (DMZ) next week, the ROK Ministry of National Defense (MND) said on Friday, amid silence from North Korean counterparts over the project.The two Koreas previously agreed to push ahead with joint remains recovery operations at a pilot site between April 1 and October