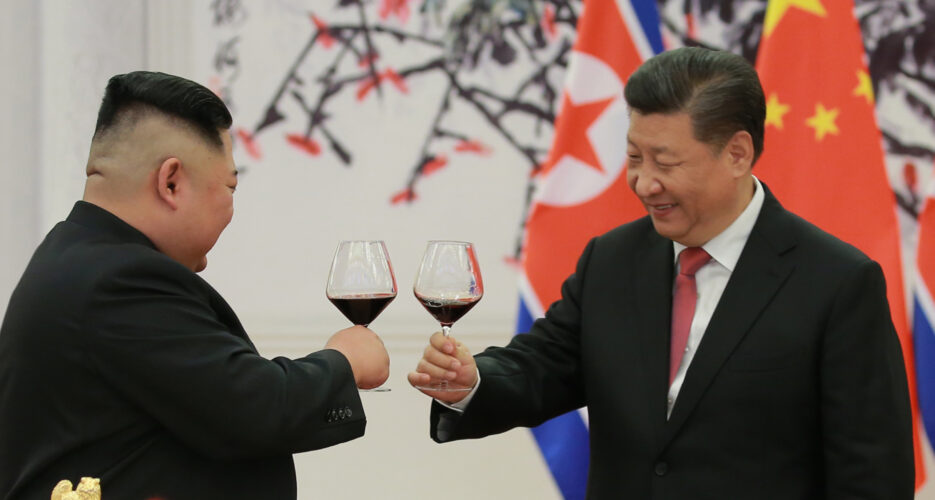 In a Korean-language report in the Korean Central News Agency (KCNA), the two leaders were said to have “focused particularly on managing the situation on the Korean Peninsula… carrying out deep and honest communications” in the process.

During a two-day summit involving ceremonies, a banquet, and a visit to a pharmaceutical factory in addition to formal high-level talks, the two sides repeatedly reaffirmed their “special relationship” and discussed “expanding ties” in various fields.

Kim Jong Un also reiterated an invitation to Xi to make an official visit to North Korea “at a convenient time,” with Xi said to have “readily accepted and informed him of his plans to do so.”

He vowed to “faithfully carry out the joint statement made during the Singapore DPRK-U.S. summit, pursue a peaceful resolution through dialogue,” and work towards “a resolution in the process of denuclearization negotiations and improving relations with the U.S.,” according to KCNA.

Xi reportedly responded by saying China agrees North Korea’s demands are “natural,” adding his country would, “as in the past, play an active and constructive role” in maintaining stability on the peninsula.

Meeting Tuesday for in-depth talks on the first day of the summit in Beijing, Kim, Xi, and other top officials reportedly committed to making 2019 an even more productive year for growing mutual relations, following their first three summits in 2018.

The article mentioned this week’s summit in the context of the 70th anniversary of bilateral ties, and said the two countries plan to “further expand development … in the fields of politics, the economy, military, culture, and others.”

Kim and Xi “are assured of the future of their relationship, which will be brighter and more beautiful in the New Year,” it added.

KCNA described Kim as having “felt energized” when he “witnessed the current state of China, developed… under socialism with Chinese characteristics,” saying the North Korean leader recognized the “achievements in the new success and grand victory” China experienced.

While the article does not explicitly mention China’s 40 years since reform and opening, as Chinese state media did last year following another summit between the two leaders, it appears Kim’s comments were in reference to that policy.

In response to Kim’s comments on the economy, Xi praised Kim Jong Un’s move last year towards a “new strategic path to focus on the construction of a socialist economy” – a reference to the new economy-first strategic line laid down last April.

The article also provided details of a trip Kim made on Wednesday morning to the factory of Chinese traditional medicine manufacturer Beijing Tong Ren Tang.

Kim “inspected items produced in the factory while observing the manufacturing processes” and “praised the company for making great achievements in production and technological development.”

North Korea has its own prominent pharmaceuticals industry, with many domestic companies frequently appearing at annual international trade fairs in Pyongyang.

Kim’s selection of the traditional medicine factory may be a sign of his plans to expand his country’s pharmaceutical industry, as his inspection of the national agricultural technology innovation park on a previous visit to Beijing last year and a detour through a shipping port in Singapore last June also reflected potential areas of North Korea’s economic focus.

Thursday’s KCNA article said Kim stopped late Monday in Dandong at the border of China and North Korea, receiving an initial welcoming ceremony at the station and picking up senior Chinese diplomat Song Tao for the train journey towards Beijing.

Traveling with his wife Ri Sol Ju and other top North Korean officials, Kim arrived the following morning in Beijing to another ceremony, and held most of the substantive high-level talks that day before a dinner banquet in the evening.

He is believed to have arrived back in Pyongyang early Thursday, with the article saying Kim departed Beijing at 1500 local time Wednesday before dropping Chinese diplomat and key Sino-DPRK interlocutor Song Tao off again in Dandong.

Before his departure the DPRK leader was reported to have handed Song a personal letter to the Chinese President, though no details of its contents were provided.

North Korean leader Kim Jong Un and Chinese President Xi Jinping discussed plans for the “joint handling of the denuclearization negotiations process” during their fourth summit on Tuesday in Beijing, DPRK state media reported Thursday morning.In a Korean-language report in the Korean Central News Agency (KCNA), the two leaders were said to have “focused particularly on managing the