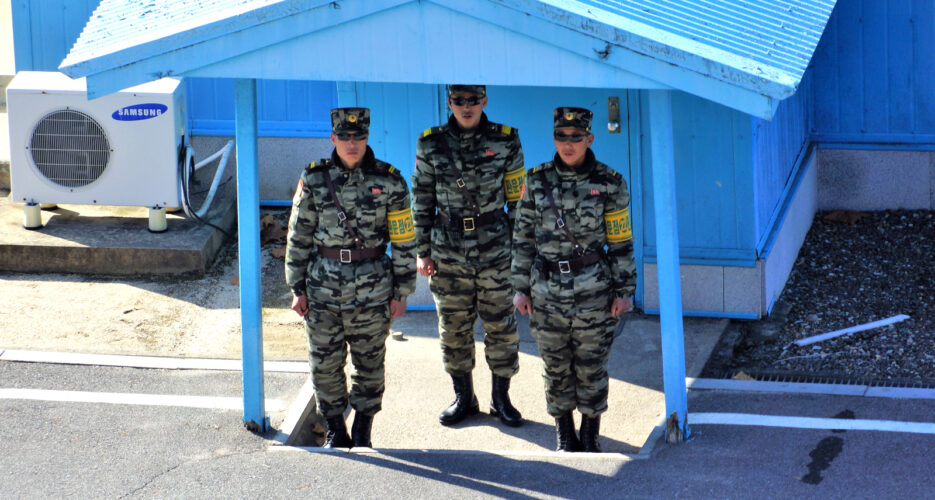 North Korean soldiers inside the Joint Security Area (JSA) have begun wearing updated uniforms, photos show, as negotiations over a new system of free movement and other logistical issues within the newly-demilitarized zone continue.

Soldiers wearing the new uniforms were shown in images taken by Koryo Tours tour manager Rich Beal during a visit with foreign visitors to the North Korean side earlier this month, with the DPRK having officially made the switch between late October and early November.

The new padded, woodland-pattern camouflage winter uniforms stand in stark contrast to their old khaki variants worn since the JSA’s establishment at the end of the Korean War in 1953.

The modern look also includes sunglasses, earpieces, and armbands – elements commonly seen on U.S. and South Korean soldiers but not on the North Koreans in the JSA.

The upgrade is part of wider changes occurring inside the JSA, which will see the elimination of the existing border and the ability for tour groups from both sides to freely cross the military demarcation line (MDL).

The two Koreas, along with the United Nations Command (UNC) agreed earlier this month on new rules for North Korean guard posts on the south side and vice versa, with the new posts having already been constructed.

The three sides continued joint inspections inside the JSA on November 13, a travel industry source said, at one point appearing to gather around the location on the South Korean side of the tree-planting ceremony conducted by Kim Jong Un and Moon Jae-in during the April 27 Panmunjom Summit.

One change already apparent in the new North Korean uniforms are yellow armbands saying “Panmunjom” and the North Korean word for “military police” (mingyong, 민경), with a circled number separating the words.

It is not yet clear if the South Korean soldiers in the JSA will wear identical armbands under the new system, though the soldiers there already wear black armbands with a different word for military police, honbyong (헌병).

A spokesperson for the UNC and United States Forces Korea (USFK) was not immediately able to provide NK News with comment on Thursday regarding coordination on uniforms between the sides.

Plans for the new JSA system have also yet to be finalized.

Tours to the JSA on the South Korean side are not running at present, with those wishing to see the DMZ having to settle for a trip to Dorasan Station, Dora Observatory, and the 3rd Infiltration Tunnel.

North Korea, on the other hand, has continued to allow foreign tour groups to visit the JSA, with Koryo Tours’ Rich Beal telling NK News there have been “no major changes” to the schedule there.

Beal said soldiers were seen wearing the new uniforms at least from the main parking lot at the entrance to the DMZ all the way to Panmunjom, including during a stop at the building where the Korean War armistice was signed just outside the boundaries of the JSA.

Officers, however, were reportedly still wearing their familiar khaki uniforms.

Beal said soldiers he talked to during a tour on November 14 remarked positively when asked about their new boots and padded winter uniforms.

Rowan Beard, a tour manager for Young Pioneer Tours (YPT), said the new uniforms follow smaller changes in prior years, such as new camo-patterned helmets introduced around four years ago “that was also well-received compared to the bland style before.”

Having visited the JSA dozens of times while leading tour groups, Beard said the previous uniforms “were still warm for the soldiers during winter and durable during summer, but didn’t quite look the part compared to their southern counterparts.”

But far from a mere routine update, the change may hold subtle political meaning as well, as Beard said soldiers have remarked in the past that South Korean uniforms “give off the imperialist look.”

Beard recalled one soldier asking him, “Why hide their eyes behind sunglasses?” – a feature which now appears part of the standard issue uniform for North Korean soldiers at the JSA as well.

As for their new earpieces, he said they would “certainly be a helpful upgrade to the soldiers compared to the previous walkie talkies that would blast out audio from other soldiers shouting updates” and “sometimes freak out the slightly concerned tourist.”

“The Chinese and western tourists are commenting on how they look good [in the new uniforms], and so the soldiers must be changing their perception from this feedback.”

North Korean soldiers inside the Joint Security Area (JSA) have begun wearing updated uniforms, photos show, as negotiations over a new system of free movement and other logistical issues within the newly-demilitarized zone continue.

Soldiers wearing the new uniforms were shown in images taken by Koryo Tours tour manager Rich Beal during a visit with foreign visitors to the North Korean side earlier this month, with the DPRK having officially made the switch between late October and early November. 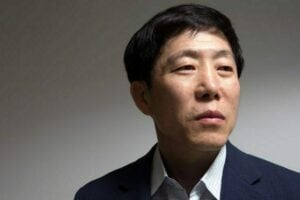