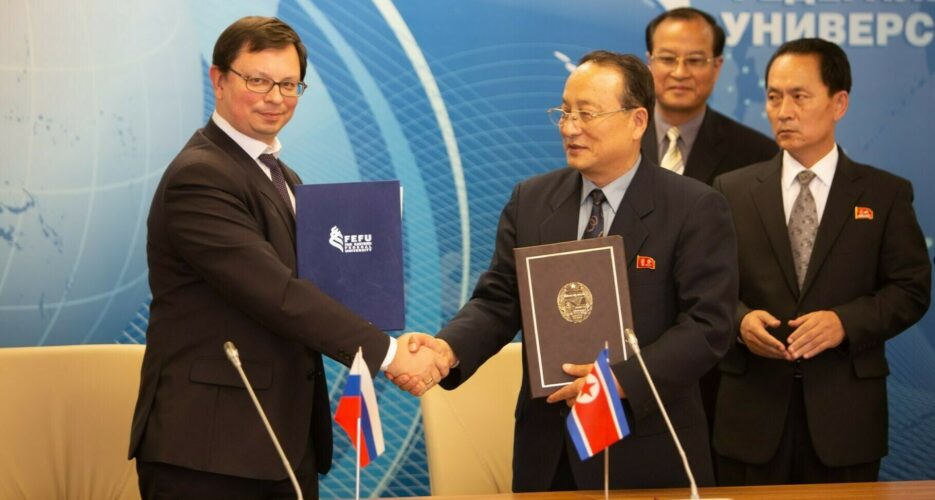 One of North Korea’s most prominent universities, the Kim Chaek University of Technology (KCUT), signed a memorandum of cooperation in areas including science and engineering with a university based out of Vladivostok on Thursday, according to a press release issued by the Russian Far Eastern Federal University (FEFU).

The two universities “plan to exchange students and teachers and conduct joint research,” the release said.

Signing the agreement for the Russian side, FEFU President Nikita Anisimov said he was “confident that the joint work of students and teachers will enrich our universities and will contribute to the strengthening of friendship between our states and peoples.”

He also thanked the “top leadership” of both countries for facilitating the opportunity.

KCUT President Hong So Hon, in turn, said “the DPRK leadership pays great attention to the development of educational and scientific relations with Russia.”

“The Far Eastern Federal University has well-known scientific schools in engineering areas, and we will be happy to cooperate in all possible areas,” he added.

In June talks ahead of this week’s agreement, a DPRK ruling party representative was quoted by the FEFU as having said that “Personnel training and the development of relations with Russian universities are of particular importance when implementing the new strategic course of the country for the integrated development of the national economy.”

Kim Jong Un visited the university and met with President Hong just five weeks ago, on the occasion of its 70th founding anniversary.

During his visit, he noted the school’s role in “building up [North Korea’s] national defense capabilities” and other areas, and stressed the need for “enhancing the quality of education as required by the new century.”

“[KCUT] is one of the universities the Party trusts, boasts, and holds up most” Kim was reported to have said, adding he also emphasized that “the building of an economic giant can be given impetus when efforts are concentrated on steadily developing the university’s scientific education.”

The FEFU also maintains close ties with the International Atomic Energy Agency (IAEA), first signing an agreement in 2016 and more recently working together on “joint research in the field of peaceful use of nuclear technology and various experience sharing programs,” among other areas, a university official said in a press release in November last year.

It also carried comments from a coordinator of the IAEA Department of Nuclear Sciences and Applications, who said following meetings that month that FEFU “has a unique position that will allow it to become one of the centers of activity of the IAEA in the world.”

That press release said Russian state-owned nuclear energy corporation Rosatom was working jointly with both FEFU and the IAEA “to monitor the development of nuclear technology in the Asia-Pacific region.”

Rosatom on its website describes itself as “one of the world market leaders of nuclear technologies and services” and “the world uranium enrichment leader.”

The field of nuclear science or education, however, was not directly mentioned in the Thursday FEFU release regarding its agreement with KCUT.

The two sides first signaled their intention to ink a deal by this month in a meeting in June, where both universities invited the other to events in their respective countries in the fall.

That included the occasion which brought the DPRK delegation to Vladivostok this week: the 100–year anniversary of engineering education in the Far East of Russia.

North Korean state outlet Korean Central News Agency (KCNA) reported on the departure of Hong and his delegation for Russia on October 29, though it did not release details as to the nature of their trip.

He also serves as Chairman of the DPRK–RF Inter-parliamentary Friendship Association and has traveled to Russia on numerous occasions to represent the DPRK in various official matters, according to KCNA reports.

The Far Eastern Federal University has also been involved in North Korean affairs for many years, having signed a cooperation agreement with Kim Il Sung University and the Pyongyang Institute of Foreign Languages in 2012.

It has hosted or attended events alongside DPRK delegations on numerous occasions in this year alone.

Most recently, in September, the FEFU Eastern Institute School of Regional and International Studies (VI-SHRMI) co-sponsored a water resources event, attended by a North Korean delegation, together with the German Hanns Seidel Foundation and the Seoul-based Korea Water Resources Corporation (K-Water).

A university press release emphasized FEFU’s role in “bringing the two Koreas together” with the event, and said “prospects for further cooperation were discussed.”

K-Water is funded by the South Korean government, and was last month reported to have set up a new team to provide water to the newly-opened joint liaison office at the Kaesong Industrial Complex (KIC).

September saw Russian Chief Justice of the Supreme Court Vyacheslav Lebedev host an event at the university under the theme, “National justice and economic development of states: new challenges in an era of change” – also attended by DPRK judiciary officials, a statement on the school’s website said.

Lebedev wrapped up a four-day trip to Pyongyang on Friday, having previously visiting for official talks between the two countries’ judiciaries in 2015.

One of North Korea’s most prominent universities, the Kim Chaek University of Technology (KCUT), signed a memorandum of cooperation in areas including science and engineering with a university based out of Vladivostok on Thursday, according to a press release issued by the Russian Far Eastern Federal University (FEFU).

The two universities “plan to exchange students and teachers and conduct joint research,” the release said.