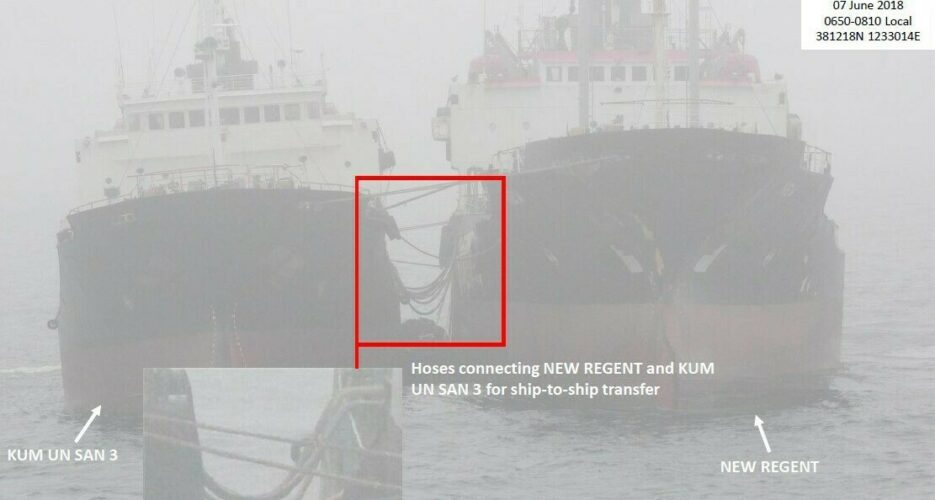 In evidence released by the State Department’s International Security and Nonproliferation (ISN) Bureau, the U.S. appears to be hoping to build on evidence tying several ships, some designated and some listed as linked to the activity, to sanctions-busting STS transfers.

The UN sanctions committee earlier in the month designated the North Korea-flagged Kum Un San 3 and the Panama-flagged Shang Yuan Bao and New Regent, requiring the tankers be de-flagged and prohibited from entering the ports of UN member states.

But the U.S. is also calling on the 1718 Committee “to designate any vessels under consideration that have shown to be involved in ship-to-ship transfers,” likely referring to the Myong Ryu 1, listed as being involved in such illicit transfers in this month’s designations but not designated itself.

The Panama-flagged Shang Yuan Bao is shown in one aerial image taken on June 2 connected to the Myong Ryu 1 by around eight hoses.

Another image from May 18, which appears to have been taken from a surveillance ship, shows the Shang Yuan Bao connected to the Paek Ma – a ship previously designated by both the UN and the U.S.

The Paek Ma, the ISN Bureau says, has also attempted to disguise its identity by painting over the name on its hull with the fake name “PUMA.”

The Shang Yuan Bao, too, is shown in an image with part of the name on its hull painted over in another alleged attempt at disguise.

At least five large hoses are shown in another image connecting the New Regent and Kum Un San 3, with the ISN Bureau alleging STS transfers occurred for around an hour and a half in the early morning of June 7.

The extensive surveillance details are a result of what the Friday press release said were an ongoing “coordinated, multinational initiative” involving the U.S., Canada, France, Japan, the UK, Australia, and New Zealand.

It also said the U.S. “has deployed aircraft and surface vessels to detect and disrupt these activities.”

The dates for the images match up with the dates provided in the original UN designations earlier this month, suggesting the sanctions committee received their evidence from these efforts at sea.

And while the UNSC 1718 Committee has designated dozens of North Korean and foreign entities, individuals, and vessels this year involved in assisting such sanctions-busting activities, the U.S. on Friday called for the UN to go a step further.

“We call on the 1718 Committee to formally recognize” the breach of this cap through such STS transfers, the State Department said Friday.

STS transfers of all goods are already specifically illegal under resolutions 2375 and 2397 passed last year, but the U.S. appears to be requesting the committee explicitly recognize the additional breach of caps on refined petroleum transfers through such operations.

The U.S. also said it plans to “impose sanctions on any individual, entity, or vessel supporting North Korea’s illicit activities” – though the Treasury Department Office of Foreign Assets Control (OFAC) has, as of Friday, yet to sanction any of the newly-designated ships.

Reiterating its commitment to the “final, fully verified denuclearization” (FFVD) of North Korea, the State Department also sought to keep pressure firmly on sanctions enforcement amid increasing calls for their easing from North Korea and its allies.

“The full enforcement of North Korean-related UN Security Council Resolutions is crucial to a successful outcome,” the press release said.

The U.S. State Department on Friday released a series of notated images further detailing purported illicit ship-to-ship transfers (STS) by North Korea-linked vessels earlier in the year.In evidence released by the State Department’s International Security and Nonproliferation (ISN) Bureau, the U.S. appears to be hoping to build on evidence tying several ships, some designated and some 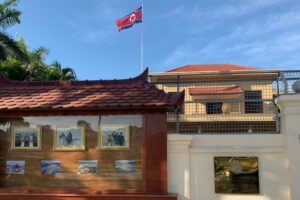 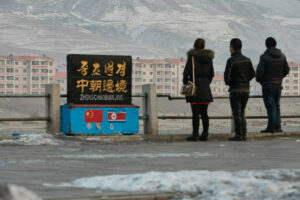