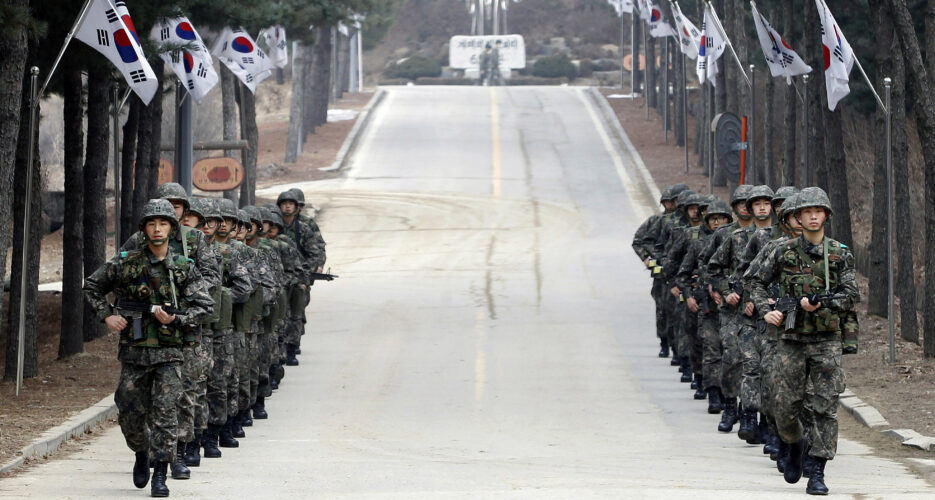 The North and South Korean militaries have attempted to engage in “operational arms control” at a preliminary level going beyond the stage of merely building mutual trust, South Korean senior officials said on Thursday at the Seoul Defense Dialogue.

Seoul and Pyongyang have had “concrete consultations” on the issue of “prohibiting all hostile acts against each other by land, air, and sea to fundamentally eliminate risk factors of war,” Director of presidential National Security Office Chung Eui-yong said.

In his keynote speech, Chung also reiterated that the two Koreas have discussed the transformation of areas on the disputed western maritime border — the so-called Northern Limit Line (NLL) — into a peace zone, as part of follow-up measures to implement the Panmunjom Declaration.

Conflicts in the area have continued over the years in what the North describes as “hot spot waters in the West Sea.”

These clashes have resulted in, among others, the two battles of Yeonpyeong in 1999 and 2002, as well as the sinking of the ROK warship Cheonan and the bombardment of Yeonpyeong Island by the North in 2010.

“There have been concrete consultations over the issue of establishing a maritime peace zone on the west coast to prevent accidental military clashes and guarantee safe fishing activities,” Chung told participants.

“I would say that the two Koreas are going beyond military trust-building, and are in effect attempting to engage in a preliminary level of operational arms control.”

Operational arms control regulates the operations of military forces by adjusting the level and scope of troop deployment while structural arms control is the advanced stage, regulating the types and amounts of weapon systems.

In his speech, Chung said the two Koreas agreed during the visit to Pyongyang by special envoys last week to “conclude the ongoing discussions on comprehensive military cooperation” at the fifth inter-Korean summit.

Last week saw the South Korean defense ministry cite the demilitarization of the Joint Security Area (JSA), joint recovery operations (JRO) in the demilitarized zone (DMZ), and the withdrawal of guard posts within the DMZ on a trial basis as items on the agenda for the summit.

The two Koreas on Thursday kicked off working-level military talks in the truce village of Panmunjom to discuss “practical issues necessary to conclude a ‘comprehensive agreement on the military sector.’”

Chung said both sides are expected to “work towards an agreement on mutual trust-building and prevention of armed conflict” at the third meeting between South Korean President Moon Jae-in and North Korean leader Kim Jong Un, which is scheduled to take place between September 18 and 20 in Pyongyang.

Seoul and Pyongyang withdrew loudspeakers along the Military Demarcation Line (MDL) in accordance with the Panmunjom Declaration in May, and restored military communication lines on the west and east coast in July and August respectively.

Chung reiterated alleviating military tensions between the two Koreas is the “basic premise and the very environment for the denuclearization of the Korean peninsula” and will accelerate the process.

“As tension is reduced further and further, the claims that prosperity is achievable in the absence of nuclear weapons will gain strength.”

“We are currently discussing measures for a preliminary level of operational arms control, and we will implement them once we reach the agreement,” Suh said, adding that this should be preceded by the ceasing of all hostile acts.

“We also prepare to proceed with consultations over the operation and scale of military forces gradually and in phases in accordance with the progress of denuclearization and the establishment of a peace regime on the Korean peninsula.”

Elaborating, Suh said the two Koreas agreed to “achieve arms control in stages depending on the progress of easing military tensions and building military confidence in a substantive manner” in the Panmunjom Declaration.

“Therefore, our military has prepared necessary measures for arms control considering a change in security environment on the Korean peninsula and surrounding areas and the implementation of actions for military confidence-building between the South and the North,” he said.

The vice defense minister said the South Korean military will still “maintain a firm readiness posture in response to threats to national security,” however.

The North and South Korean militaries have attempted to engage in "operational arms control” at a preliminary level going beyond the stage of merely building mutual trust, South Korean senior officials said on Thursday at the Seoul Defense Dialogue.Seoul and Pyongyang have had “concrete consultations” on the issue of “prohibiting all hostile acts against each other by land, air, and