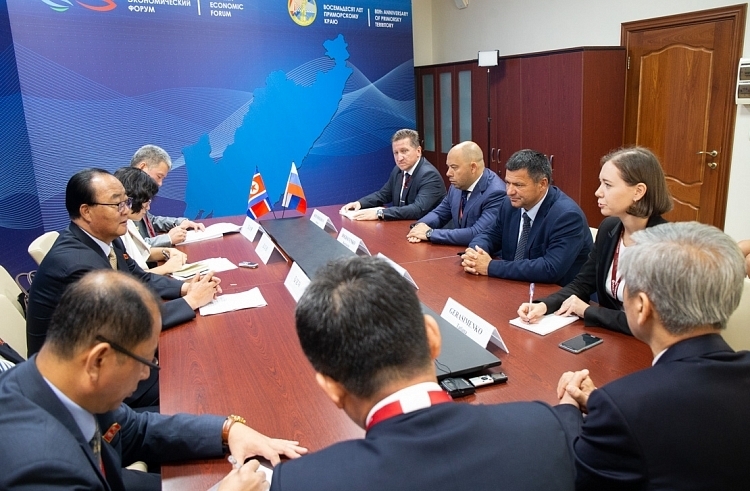 A North Korean foreign ministry official on Thursday expressed the country’s intention to open a “trading house” in the Russian Far East region of Primorye (Primorsky Krai) to promote trade of domestic goods, according to the official website of the region.

The announcement came after a meeting at the Eastern Economic Forum (EEF) in Vladivostok between a DPRK delegation led by Minister of External Economic Relations Kim Yong Jae and Primorye acting Governor Andrey Tarasenko.

Kim said the DPRK is interested in intensifying trade relations with the Primorsky Territory, and that the new trading house will serve to both promote North Korean products and hold exhibitions.

The DPRK side additionally presented to the Russian officials a “list of import-export goods for exchange with the region” and expects a similar list in return, the article on the Primorsky Krai Administration website said.

The particulars of the project, including the site’s location and permanence of the office, have yet to be announced.

In the meeting, Kim additionally pointed to the construction of a border crossing and a bridge “connecting the stations of Khasan and Tumangang” as an important project between the two countries.

One member of the DPRK side reportedly said “the implementation of the project will not only become an incentive for increasing trade between the territories, but will also allow (for) developing tourist connections,” according to the article.

The two sides previously agreed to push ahead with this project during meetings in Pyongyang in March, and more recently in July, officials from both Koreas and Russia held discussions on Rajin-Khasan rail projects.

Another issue which both sides discussed in Thursday’s meeting was that of North Korean laborers working in the territory of Primorye.

Kim reportedly expressed concern over a looming deadline to expel all North Korean workers from Russia by the end of next year, stating that there were 10,000 DPRK laborers in the region last year and that their stay would be in jeopardy if measures are not taken on the issue.

UN sanctions Resolution 2397 passed at the end of last year, prohibits all UN member states from hosting North Korean workers in their territory after December 22, 2019.

Governor Tarasenko reportedly said in response to Kim’s comments that his administration’s hands were somewhat tied on the issue by Moscow, but that they were appealing to Russian authorities to allow a quota of 5000 workers to remain in the region, and expects an answer within six weeks.

A Russian interior ministry official was quoted by Interfax News Agency on Tuesday as saying there are – at present – just shy of 20,000 North Korean laborers still working in the country.

In August, The Wall Street Journal found that the interior ministry’s own records show at least 700 new work permits had been issued this year, which would violate international sanctions if indeed brand new contracts were signed.

Tarasenko may visit North Korea in the future to work further on these issues as Kim extended an invitation to the Primorye governor during the meeting, though he must first win an election scheduled for September 13 to remain in his post.

“It is this year that we would like to achieve the most significant and fruitful results in our relations,” Kim added, emphasizing the urgency of the developments discussed on Thursday.

Elsewhere at the EEF, Russian President Vladimir Putin signaled his wish to return the format of nuclear negotiations with North Korea to the Six-Party Talks, where Russia could be more directly involved.

Speaking at a meeting about Far East economic activity on Thursday, Putin suggested security guarantees for North Korea would be more plausible with the participation of nuclear powers such as itself.

He also pushed back against the current situation where the U.S. and the North are deadlocked over disagreements on concession sequencing, saying “It seems to me counterproductive that North Korea is required to do everything, and the opposite side will not do anything.”

Earlier at the forum, Russian Deputy Foreign Minister Igor Morgulov said there should be efforts to lift UN sanctions on the DPRK concurrent with steps it takes to denuclearize.

A North Korean foreign ministry official on Thursday expressed the country’s intention to open a “trading house” in the Russian Far East region of Primorye (Primorsky Krai) to promote trade of domestic goods, according to the official website of the region.The announcement came after a meeting at the Eastern Economic Forum (EEF) in Vladivostok between a DPRK delegation led by Minister of