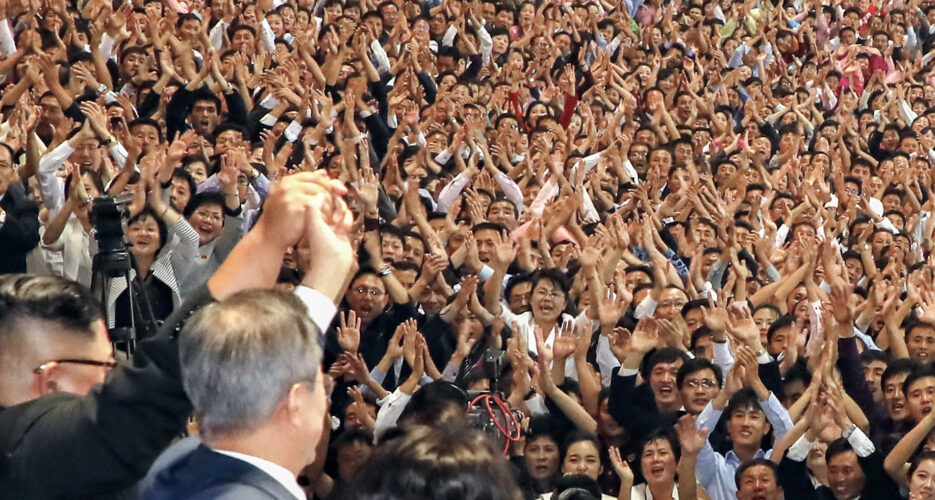 South Korean President Moon Jae-in in a speech on Wednesday evening praised progress towards a “new era” for the peninsula, urging a North Korean audience to overcome 70 years of “hostility.”

In a speech to over 100,000 spectators at the DPRK capital’s May Day Stadium, Moon said words could not express how moved he was to be speaking in front of so many North Korean citizens.

In a speech tinged with nationalism after a special performance of the “Glorious Country” mass games, the ROK President said he had observed the “remarkable development of Pyongyang” during his visit this week.

“I could see the indomitable courage of the people to stand up by themselves, keeping the pride of the nation even in difficult times,” Moon said.

The Korean nation is “outstanding” and “tenacious,” the ROK President told the crowd.

“We lived together for 5000 years but lived separately for 70 years. I, here, propose that we completely settle 70 years of hostility and take a big peaceful step to become one again.”

“Chairman Kim Jong Un and I will create a new fatherland while firmly holding the hands of 80 million North and South Korean people. Let’s step toward the new future together.”

The speech marked the first by a South Korean President in front of a North Korean audience of this scale.

The late South Korean President Roh Moo-hyun, however, did watch the Arirang Mass Games during a state visit to Pyongyang in October 2007.

In remarks before Moon’s speech, North Korean leader Kim Jong Un said the two had made a “fresh milestone in the development of inter-Korean relations and the journey of peace and prosperity.”

“I’d like to express my heartfelt thanks towards President Moon Jae-in’s tireless passion and efforts,” he said.

“This moment will go down in history.”

The South Korean President said he and Kim would work together to create a “new era,” saying the two had agreed “to eliminate the fear of war and danger of armed conflicts on the Korean peninsula.”

“We also commit to hand to our descendants… a land of peace, free from nuclear weapons and the threat of war,” he told the audience.

In his speech, Moon also said the two leaders also agreed to take measures to “fundamentally resolve the agony of separated families.”

“I pay my tribute to your leader, chairman of the State Affairs Commission, who has taken this bold journey with me… towards a new future.”


The two leaders then watched the “the Glorious Country” mass games.

Pyongyang’s “grand mass gymnastics and artistic performance” — the first of its kind in over five years — have been held this month as part of celebrations marking the 70th anniversary of the country’s foundation.

Though inter-Korean relations were a major theme at a performance of the mass games last week, the event is also used by the North to promote the superiority of its ideology and system.

The South Korean President’s presence at the games, too, will likely draw criticism, due to the grueling rehearsals linked to the event – and the presence of young children among the performers.

Previous reporting by NK News has revealed participants practicing long hours ahead of the event, with many sleeping overnight at the practice grounds.

Senior Secretary to the President for Public Communication Yoon Young-chan earlier in the day said the mass games today would includes a message welcoming President Moon.

“We understand the North has modified the performance in consideration of the position of our delegation,” he said, adding Pyongyang may change the title of the performance.

Before the event, Moon and Kim had lunch and dinner together at Okryu restaurant and Pyongyang’s Taedonggang Seafood Restaurant respectively.

South Korean presidential spokesperson Kim Eui-keum said Kim Jong Un had made the offer and Moon had accepted , without sharing further details of their schedule.

Spokesperson Kim said the South Korean President had told the DPRK leader that he would like to climb Mount Paektu through Korean territory, not visit via China as is typically required of ROK citizens.

Moon previously told Kim Jong Un he hoped to visit the Mount Paektu and Kaema Plateau during a banquet held during his first meeting with the North Korean leader in April.

The South Korean President is expected to return to Seoul later in the day on Thursday.

South Korean President Moon Jae-in in a speech on Wednesday evening praised progress towards a “new era” for the peninsula, urging a North Korean audience to overcome 70 years of "hostility."In a speech to over 100,000 spectators at the DPRK capital's May Day Stadium, Moon said words could not express how moved he was to be speaking in front of so many North Korean citizens.In a 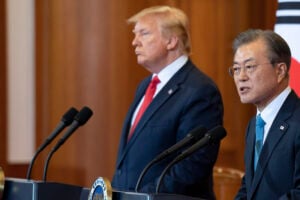 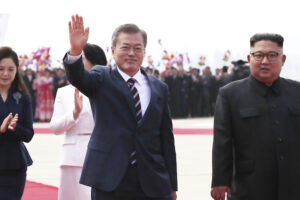 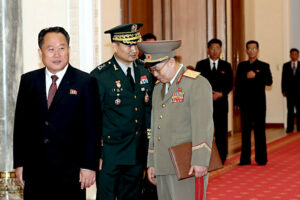